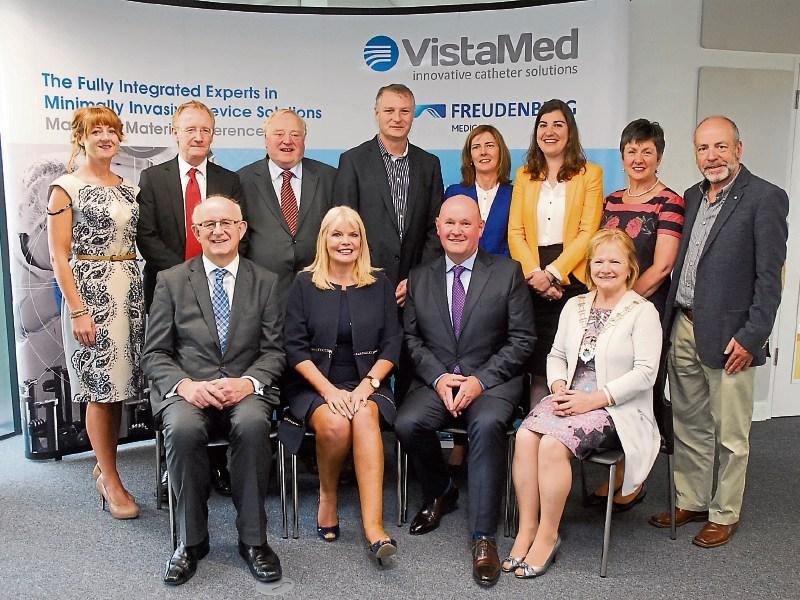 In what has been described as a massive boost to the county, local company VistaMed has confirmed that 200 new jobs will be filled by the end of 2018 with the official opening of a state-of-the-art research and development facility in Carrick-on-Shannon.

The company, which commenced production in Rooskey in 1999 now employs over 300 staff in locations in Rooskey and Carrick-on-Shannon.

Recruitment for the 200 new positions has already started with 37 jobs now in place but further recruitment will take place to fill the remaining 163 positions over the next 16 months.

VistaMed is also expanding its current manufacturing facility in Carrick-on-Shannon by 45,000 sq feet.

Managing Director of VistaMed, Patrick Mulholland, said that the entrepreneurial spirit amongst the Irish would appear to be very strong but he appealed to the government to address the less than favourable tax situation in order to encourage further growth and investment.

The jobs announcement at VistaMed's new Research and Development site in Carrick-on-Shannon has been described as a huge win not only for the town, but also an important vote of confidence for the county.

Public representatives attending the official jobs announcement in the county town on Monday included TDs, Senators and County Councillors as well as staff of Leitrim County Council and the Local Enterprise Office.

Deputy Martin Kenny welcomed the jobs announcement describing it as a very important step towards recovery for Carrick-on-Shannon and the county.

“In the difficult days that have passed this would not have been possible. Hopefully this is just the start of many such job announcements for the county,” he said.

His words were echoed by Fine Gael Senator Frank Feighan who described the expansion of VistaMed as “a major endorsement of the pool of talent which exists in Leitrim and the surrounding region.

“Today’s jobs announcement has given another huge vote of confidence to the community of Carrick-on-Shannon and Rooskey where its other plant is located,” he said.

His party colleague, Deputy Tony McLoughlin agreed stating: “The jobs and investment are a huge boost for the area and a strong endorsement of the skilled workforce, facilities and services available.

Senator Maura Hopkins said the jobs were a welcome boost for and area “which has gone through a difficult period in recent times after suffering many jobs losses.”

Carrick-on-Shannon Municipal District councillors also praised VistaMed, its management and staff, for their investment in the sector.

Cathaoirleach of Leitrim County Council, Cllr Mary Bohan, who was on hand to welcome the Minister to the county, told the Leitrim Observer that the announcement of 200 jobs for Carrick-on-Shannon was the equivalent of announcing 2,000 for cities like Dublin.

“These jobs are a lifeline for communities and counties such as ours and I would like to thank everyone involved in bringing these jobs to Co Leitrim,” she said.

However, she also appealed for the Government to find a solution to ongoing rural broadband deficiencies, stressing that in order for smaller rural towns and villages to see job growth, proper infrastructure needed to be in place.

Councillor Finola Armstrong-McGuire said the confirmation that the new Research and Development facility would ultimately create 200 news jobs by 2018 was “fantastic news.”

“It is lovely to see something built on in this county going on to such success. It is tremendously positive news. Congratulations to all involved.”

“This company has continually grown their business and now have an amazing facility that is not only at the highest level of research and development in Ireland, but in this industry,” she said.

“Full credit must be paid to Paddy, his wife Eileen and their staff for making this a reality.”

“I was one of the first to welcome him to Rooskey when he established the factory in 1998 and I wish him and his staff every success,” Cllr McGowan said.

Although not present at the launch, Cllr Enda Stenson praised VistaMed for "ploughing a lone furrow over the years" and added there is huge office space still available in Carrick to let and more Government assistance is needed in that regard.”