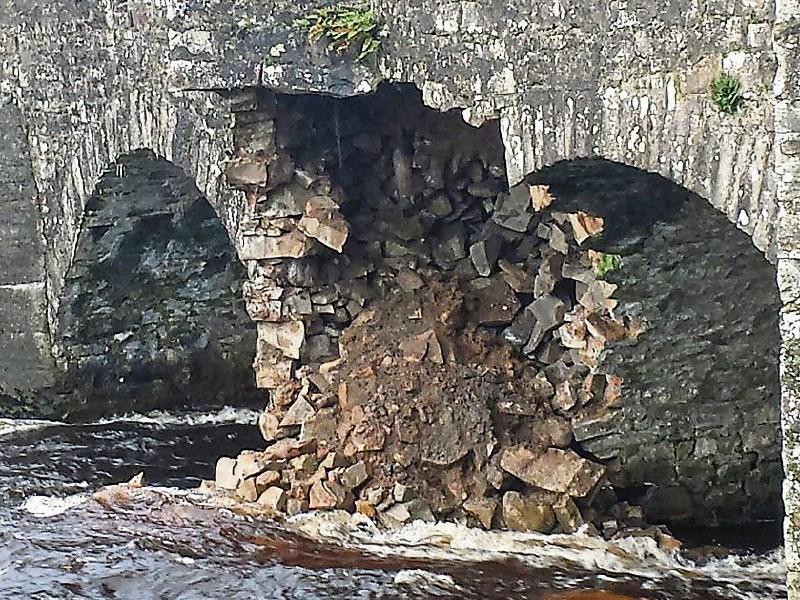 The Four Masters Bridge at Mullinaleck on the Moy Road between Kinlough and Ballyshannon could reopen as early as next week as the works being carried out by contractors Milling Bros. are on schedule, according to local Fianna Fail Councillor Justin Warnock.

The historic bridge has been closed since December 19, 2015 when it sustained serious structural damage during flooding along the River Drowes during Storm Desmond.

Speaking to the Leitrim Observer this week, Cllr Warnock said: “We can thank local woman, Rose Small, for spotting the first cracks in the arch and contacting myself and I immediately contacted Leitrim County Council and within the hour the bridge was closed.

“The next morning the arch and pier were rubble in the river. This has been an inconvenience for the past eight months but it could have been worse,” said Cllr Warnock.

The north Leitrim councillor said that the closure of the bridge “had the greatest impact” on the lives of Leitrim people living on the Northern shore of Lough Melvin in Askill and on local businesses like the Drowes Salmon Fishery and Connolly Engineering.

“It will be lovely to see the Four Masters Monument back on the parapet wall on the Rossfriar side of the bridge, the area where the Annals of the Four Masters were compiled between 1632 and 1636,” he pointed out.