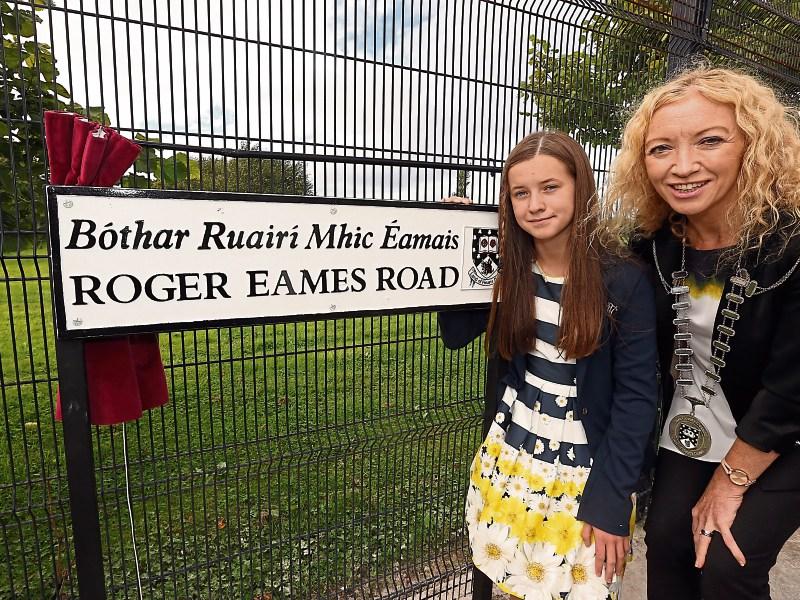 A letter from a 12 year old Cork girl has succeeded in getting a Sligo road called after her Leitrim grandfather.

Allison Eames wrote to Sligo County Council telling them she had “a wish” that a road in the town be named after her grandfather, Roger Eames, following his death. And last Saturday it was granted as the Mayor of Sligo, local councillors, residents from the area and members of the Eames family gathered to witness the unveiling of the road sign dedicating the road to Mr Eames.

A fifth class student at the time in St Catherine’s NS on Model Farm Road in Cork, Ali decided to write to the council highlighting her grandad’s good deeds for the town of Sligo and asking for the lasting tribute for him.

“We were driving down this road and I asked my dad what’s the name of this road and he said it doesn’t have a name. I asked how roads got names. It went from there,” said Ali.

In her letter Ali explained that Roger, a Rossinver native who worked for the Department of Agriculture in Sligo, had done many wonderful things.

“He helped set up the Leitrim People’s Association in Sligo and in 1994 was Leitrim Guardian Personality of the Year. Grandad was always training football teams and wanted to give Sligo kids something to do.

“He never wanted thanks for the things he did. He inspired me because he always put other people first. There is a road going through Kevinsfort now and it comes out near St Mary’s Football ground. I have a wish; can this road please be called after my grandad Roger Eames?

The now first year student at Mount Mercy College in Cork could not contain her delight at the unveiling ceremony, which fittingly took place on the late Mr Eames’s birthday.

“I’m just really happy that we could honour my grandad in such a special way. It’s the best day it could have happened. It was good for our family to be together today,” said Ali.

Her father Norre explained the significance of the road to their family.

“The road was part of a big farm called Kevinsfort farms. Back in 1966 the local football club at the time was called Muire Naoife and they didn’t have their own ground and they were looking for a plot of land somewhere to build their own GAA grounds.

“They went to a local farmer and he agreed to sell them nine acres, which is now St Mary’s Gaelic Football Grounds in Sligo or Kent Park. To buy that they had to go to the bank. So my dad and some of his colleagues from the football club went to the bank manager cap in hand and he gave them a loan if some guarantees were given and my dad gave one of those.

“As a family we are absolutely thrilled. It’s a huge gesture from our county council. I suppose we could be cynical about politicians but I think this is a time politicians have delivered big on a local level and on a very personal level for our family. This has caused a lot of smiles and a lot of tears in our house but today is a great day.”

Mayor of Sligo Cllr Marie Casserly, whose motion along with Cllr Sean McManus put the wheels in motion for the project, said now the many people who have been touched by Roger’s kindness and grace will reflect with great fondness on his memory, and will pay their own quiet tribute when they pass along the road that will forever bear his name.

“Alison, you touched the hearts of our Council with your moving tribute, and you should take pride in the central role you have played in bringing today’s events to fruition.

“Roger was selfless and generous, a kind neighbour, a revered friend, a respected and admired pillar of his community” said Cllr Casserly at the unveiling. “Roger played a pivotal role in Sligo Community Games and managed a number of Connaught and All Ireland wins from folk group, question time, Irish dancing, instrumental music, recitation and solo singing. He was also Honorary President of the Leitrim Guardian. His popularity was reflected in the large crowd who turned up to witness the unveiling.”