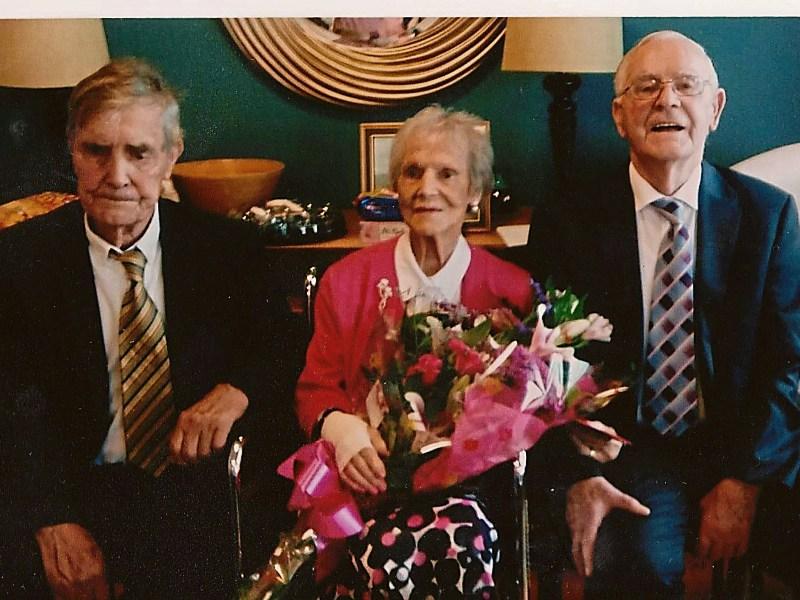 Congratulations to Margaret Regan, or Maggie as she is more commonly known, from Kinlough who celebrated her 100th birthday at Our Lady’s Hospital, Manorhamilton on Thursday, September 1st.

Margaret (nee Feely) was born in Larnahugh, Rossinver, Co Leitrim in 1916. Her parents, Patrick and Annie Feely, got married in Boston in 1914 and returned to live in Rossinver.

She went to school in Rossinver at the age of six and left at fourteen to start work. Her first job was in Foy's Guest House, Bundoran and she worked long hours and only got to visit home when the summer season was over.

Margaret remembers the construction of the Convent in Rossinver. The contractors were Travers from Bundoran and they often gave Margaret and her siblings “lifts”. As Margaret says, “It was safe to give lifts back then”.

Margaret then went to work in the Leinster Cafe in Enniskillen. This was during the war years. She remembers serving black coffee and steak to the American soldiers from early morning until midnight. Her pay, at that time, was two pounds a month.

Margaret married Francis John Regan in 1953 and went to live in Aughavohil, Kinlough.

Farming was her life line and she helped with the animals, saved the turf, sold the eggs and made her own butter. She loved nature and had great pride in her flower garden.

Sadly, her husband, Francis John passed away in 1987 aged 76 years. Margaret then moved into the village of Kinlough and enjoyed living there and going on day trips to Ballyshannon Day Centre.

Her first time on an aeroplane was at the tender age of ninety years when she went to visit her brother in England. Margaret has many friends and is never short of company. Her brothers Frank and Packie and sister-in-law Annie visit her regularly.

Her family would like to thank the staff of Our Lady’s Hospital, Manorhamilton for accommodating her birthday party and to thank everyone for all the kindness shown to her at this time.

Margaret herself would like to take this opportunity to thank all her kind neighbours, friends, family and all who visit and have helped her in any way throughout her long life.

Best wishes and many more years of good health to Margaret.