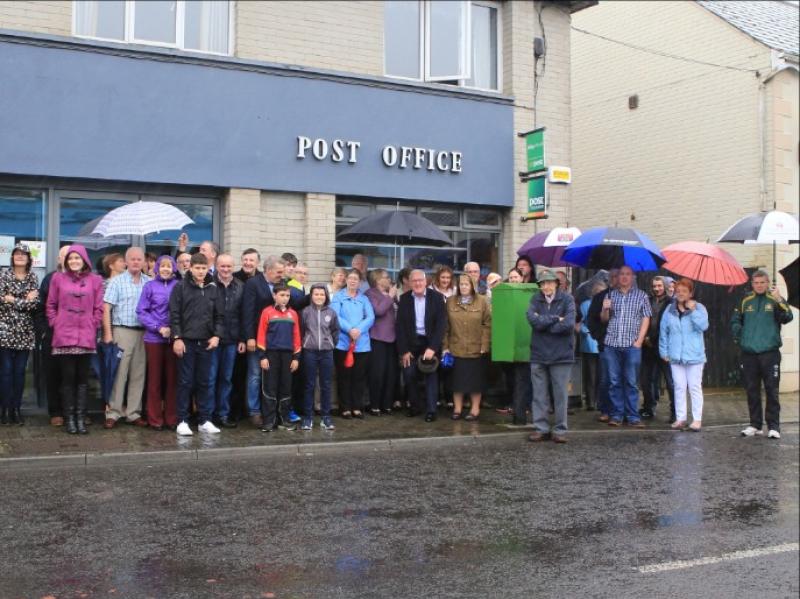 A local action group has been set up in Ballinamore against any relocation of the current Post Office from High Street, Ballinamore.
A protest in support of the Martin family to retain the Post Office outlet was held in the town last week.
The Martin family have been the landlords and operators of postal services in the locality for more than 80 years.
Brian Martin is the temporary Post Master, he was contracted last year, but there is no end date to his contract.
Mr Martin told the paper he applied for the permanent position of Post Master but was refused.
He said An Post offered “no reason” why his application was refused.
A new Post Master has been appointed by An Post. A spokesperson for the company told the paper, “Following the recent process to select a new contractor, An Post is planning a new, top quality new Post Office for its Ballinamore customers. We expect that it will open its doors in mid-October and we will make a formal announcement closer to the opening day.”
She said, “In the meantime it is business as usual at the current office.” An Post also confirmed the current staff will transfer to the new Post Office.
Brian Martin said he has not been notified of any date for change of service and as it stands he is the current Postmaster.
Mr Martin said the family “appreciate the local support” and they want to do best by the community.
Speaking on behalf of the local action group spokesperson Joey Smith said that they wished to send very clear messages to the “powers that be in An Post – that there is widespread support for Mrs Miriam Martin and her family in retaining the Post Office outlet and that every effort will be made to prevent the postal business being moved away from High St. which could result in a further premises being closed up.”
He stated, “It is vitally important for the survival of a small town like Ballinamore that businesses and services are spread right throughout the entire town.”