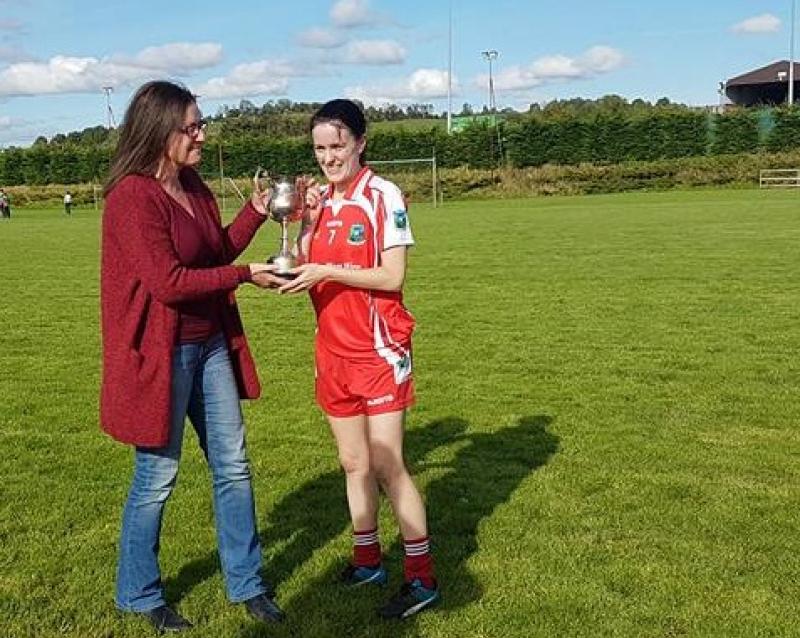 Dromahair captain Erin Farrell is pictured being presented with the Leitrim Ladies Division 1 Cup after her side defeated Kiltubrid this afternoon in Ballinamore.

The Dromahair Ladies went some way towards making up for the pain of defeat in the semi-final of the Senior Championship at the hands of Kiltubrid when they saw off the same opposition in Ballinamore this afternoon to claim the Division 1 title.

Dromahair raced into a five point lead before Kiltubrid brought themselves back into contention with a Michelle Guckian goal 13 minutes into a pulsating contest.

Dromahair deservedly held a three point advantage - 0-7 to 1-1 - at the interval but within seconds of the restart Kiltubrid were awarded a penalty. Unfortunately for Kiltubrid, who claimed the Senior Championship crown recently, Aine Tighe's penalty hit the crossbar before going over the bar.

Erin Farrell, Anna Conlan, Mairead McMorrow and Roisin Fowley were all to the fore for Dromahair and they extended their lead to 0-14 to 1-7 as the game entered injury time.

Having been kept relatively quiet all afternoon, Aine Tighe pounced for a goal two minutes into injury time but it was not enough to deny Dromahair who saw out the remainder of the game to emerge victorious on a scoreline of 0-14 to 2-7.