Big Brother is apparently watching us.... well the NSA anyway

Claims Leitrim is a trigger word for US security surveillance 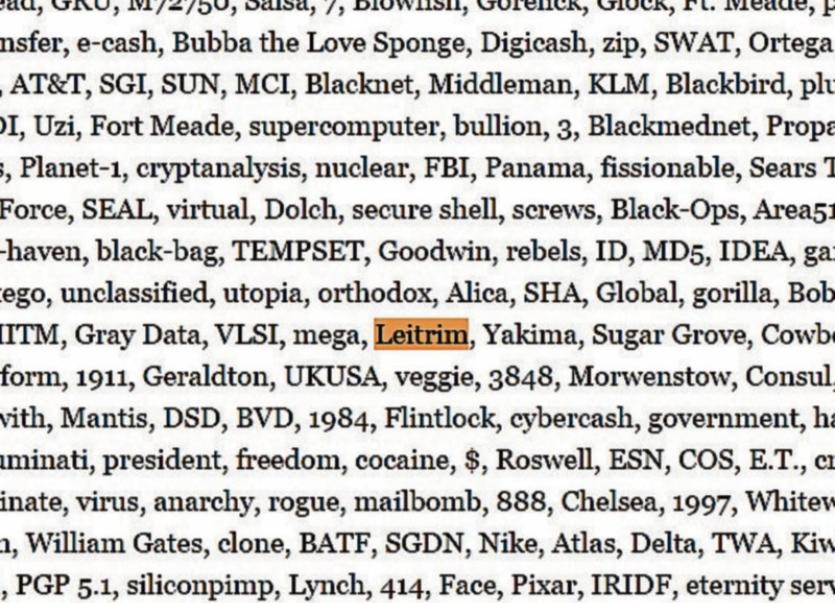 The NSA watch words list purported to include Leitrim as a trigger word.

It's a story that has been doing the rounds of cyberspace for a couple of years now, but over the weekend it managed to raise its ugly head once more. Yes, apparently - if you believe all things published on the internet - Leitrim has been included on a list of trigger words under surveillance by the United States of America's National Security Agency (NSA).

While this story has prompted bafflement from some, others have met it with well deserved ridicule, after all, why Leitrim?

But, in the interests of public safety and, well, just general nosiness, the staff of the Leitrim Observer have contacted the United States of America's NSA and officially enquired about the validity of the Leitrim watch list rumour.

While awaiting their response we decided to do a little investigating on our own.

A website www.Attrition.org - which claims to monitor the goings on in the security industry - first published a list of so called 'trigger words' which it was claimed, attracted the interest of the United States of America National Security Agency, if used on anything published online.

However the list, which first appeared in 1998, hasn't been updated since. A visit to the site doesn't exactly inspire anyone with confidence about its status as a reliable source, especially as when we opened it, the welcoming slogan kindly informed us that restraining orders were just someone's way of telling us they loved us.

However the urban myth of the NSA trigger-word list is something which has consistently refused to go away.

In May 2012 a report on the website www.sovereignman.com detailed how Homeland Security had been 'forced' to publish its 2011 Analyst's Desktop Binder - a manual for staff on what to monitor in terms of internet activity.

In it, details the report, were 377 trigger words - none of which, coincidentally, included Leitrim - which attracted the interest of the National Security Agency when used. Some are obvious, words like assassination and attack, others are slightly more innocuous words - like cloud, pork, smart and exercise.

However some time between May 2012 and June 2013 the so called leaked 'watch list' of trigger words expanded exponentially - and it's now running at close to 600 words.

Interestingly, in the latest update Leitrim is the only Irish county included in the watch list. While we could feel a perverse sense of pride at this - after all, in this at least, it would appear we are all-Ireland champions - the company we are keeping on the list isn't very impressive at all.

Oh yes there are the usual suspects like DefCon V, Hackers and Computer Terrorism, but words like Scully (we're assuming of X-files fame), VHF, Dictionary and obscurely enough, 15kg, have also been included.

So basically if you typed a Facebook post along the lines of “I took 15kg of sugar over to see Scully, my neighbour here in Co Leitrim. I better remember to ask for my dictionary back”, well, alarm bells would just be ringing all over the shop in the NSA.

Of course we're having to base this on an assumption, as, despite getting confirmation that our query had duly been received and a response would be forthcoming from the NSA website enquiry portal, alas, the deadline passed and ....nothing.

Clearly it's been a busy week for the staff at the NSA.

But just in case, please add the word Leitrim to everything you send on email and post on facebook from now on. After all, we may as well capitalise on the notoriety.