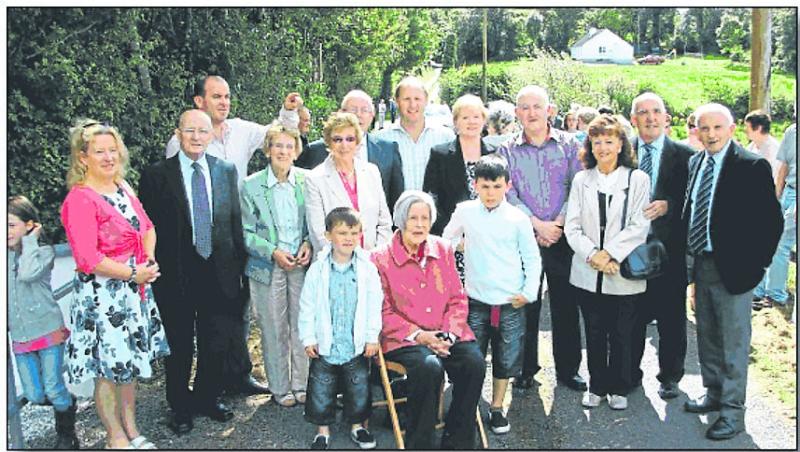 Bernadette (sitting) is pictured at the 70 anniversary of the tragedy which took place in August 2012.

The death has taken place of Bernadette Spollen (née Wisley) Railway Terrace., Ballinamore, Leitrim. She was the last remaining survivor of the Carrickmakeegan tragedy 1942.

Sunday, August 23rd 1942 is forever etched on the minds of people in the Ballinamore area – the day on which six young people lost their lives in a tragic boating accident at Carrickmakeegan, on the Ballinamore-Ballyconnell Canal, close to where it enters Garadice Lake.

Lost in the drowning were Sean Dolphin, Seamus Wisley, Maureen Rowley, Carmel Prior, Minnie Walsh and Maureen Moran, all aged between 15 and 19 years.

They and their friends Eamon Canning, Betty Bohan, Teresa Martin, Carmel Conlon, Noel Dolan, Bernadette Wisley and Vincent Keegan clambered excitedly into a boat on August 23, 1942, only for it to capsize and they were all tumbled headlong into the deep water. Thanks to the heroism of the only swimmer in the group, Noel Dolan, and the valiant efforts of Vincent Keegan, the catastrophe was prevented from being even worse, as they managed to save the lives of some of the youngsters.

There were 13 young people from the town who cycled to Carrickmakeegan bridge, which spans the canal about two miles from Ballinamore on the sunny August 23, 1942.

At an inquest into the accident, on August 24 (the day after the event) it was reported by the Leitrim Observer that all 13 got into a flat bottomed boat (16x4ft) which had been moored at Maxwells Shore on the canal bank. As the two oarsmen Noel Dolan and Vincent Keegan managed to get clear of the bank, it appears there were too many passengers on one side of the boat - it went over on its side and the water started to come in. Panic set in and the passengers all plunged out, except Mr Keegan, a non swimmer who “went into the water showing great bravery and composure in rescuing three of the party.”

Noel Dolan, who was a swimmer helped Bearnadette Wisley to the shore. After undressing, Mr Dolan went in again to try and rescue Sean Dolphin, but “despite his best efforts his friend was lost.” Dolan also helped Vincent Keegan after he got in difficulty trying to save others.

According to the archives “by the time Sgt Hugh J Gillespie, Ballinamore arrived on the scene at 4.50pm, only the body of Carmel Prior had been pulled out of the canal by local farmer Hugh Baxter.” Great efforts were made by Hugh Baxter, John Gallagher and Vincent Keegan to revive her. The rest of the bodies were recovered from the canal but Dr PJ Moroney was unable to revive any of them. Fr Brady CC Ballinamore administered the Last Rites.

Both Noel Dolan and Vincent Keegan were later commended on their great heroism in rescuing five of the party “at great risk to their own lives.”

Patrick Moran, father of the deceased Maureen Moran told the inquest in Ballinamore that he felt no blame for anyone and hoped and prayed they were all in heaven. He added “the last time that I saw my child was in the Church Choir on Sunday.” It is reported that the town of Ballinamore went into mourning for two days, all business closed, while work in offices and outdoors were suspended.

While it was originally intended to have a public funeral for all six victims, families wanted their own private funerals to pay their last tributes. The first funeral was that of Carmel Prior at 2.30pm and the other funerals followed at half hour intervals after that. The Local Defence Forces formed a guard of honour, members of the Red Cross marched behind the coffins and representatives from all of the churches, sporting clubs and the general public from all over the county attended the funerals.

In September 1990 a memorial monument was erected at Carrickmakeegan bridge. A number of songs were composed in tribute to and in memory of the victims and to the heroism of those who helped to save those drowning.

Bernadette was predeceased by her husband Dermot. She will be sadly missed by her sister Alacoque and brother Brendan, nephews, nieces, relatives, neighbours and friends.Reposing at her residence until Tuesday at 12 noon. Removal to St. Patrick's Church, Ballinamore, arriving for Funeral Mass at 2 o'clock on Tuesday afternoon.. Burial afterwards in Oughteragh Cemetery, Ballinamore.