Little boy lost in wilds of Africa in the 19th century 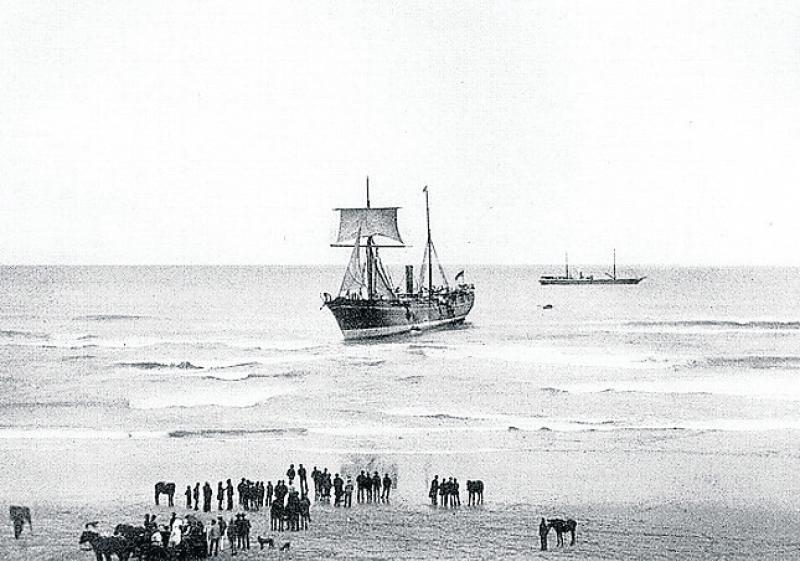 SS Asiatic on which the Barton family travelled to South Africa.

As a child in South Africa, Rosemarie Gilchrist’s grandmother told her a story about an orphaned Irish boy, lost in Africa, who grew up in the bush, cared for by a local tribe until he was found by a man who then traced his family back to Counties Leitrim and Fermanagh.
This amazing story has now become the subject of a documentary ‘The Prospector’s Son’, set to broadcast at 2pm on RTÉ Radio 1 on Saturday, October 15.
The boy’s name was Cyril Barton, and he was Rosemarie’s cousin. He was born in South Africa in 1875 to Irish parents, Florence and Folliott Barton.
Cyril’s mother, née Florence Lyons Montgomery, came from an Anglo-Irish family who were landlords in Killargue, Co Leitrim. She married Folliott Barton from Pettigo, County Fermanagh, who also came from a landed family.
Folliott, an engineer, set up a large scale mining enterprise in Belbulben, Co Sligo. However, things didn’t go to plan and the enterprise ended five years into a 21 year lease. He was then declared bankrupt, and a hurried escape to South Africa followed.
After a month long turbulent journey on the SS Asiatic, the Bartons disembarked in Cape Town, and travelled upcountry where Folliott hoped to find engineering work.
Florence was a graphic letter writer, and her letters written to her family back in Ireland have survived, and document the birth of Cyril in Grahamstown in June 1875, along with the trials and tribulations of Florence, Folliott and Cyril and their travels through South Africa via ox-wagon.
Rosemarie’s grandmother’s story has always fascinated her, and years later she came across some old family documents from Ireland which give an account of what happened to Cyril and his parents.
It tells us that Florence died of malarial fever. After her death, eight-year-old Cyril and his father then moved onto the gold fields of the Northern Province. En route, Folliott had his possessions and wagon stolen, and was killed. The maid travelling with them grabbed the young boy, Cyril, and took him to her tribe in the mountains.
According to the family account, nothing more was heard of Cyril for many years although all enquiries were made as to what had become of him. Years afterwards, his grandmother, Mrs Barton, had a South African newspaper sent to her in which was an account of a white child having been found by a hunter in a wild tribal area far up country. She at once got into communication with the hunter and eventually Cyril was brought home to his father's people in Ireland.
We later find Cyril in Dublin in 1933, working as a clerk in the Office of the Comptroller and Auditor General. But what happened to him before and after?
What became of him as a youngster and what effect did his strange upbringing have on him as a person?
Rosemarie has heard this story about her cousin all her life, but is now piecing together what actually happened.
Rosemarie and documentary maker, Sarah Blake, go in search of Cyril’s story – a trail that moves from Fermanagh, Leitrim and Sligo, to the remote Highveld of the Mpumalanga region of South Africa, and back to Dublin.
It will be repeated on RTÉ Radio 1 on October 16 at 7pm. The programme will be available for podcast/download from Friday, October 14 on www.rte.ie/doconone.