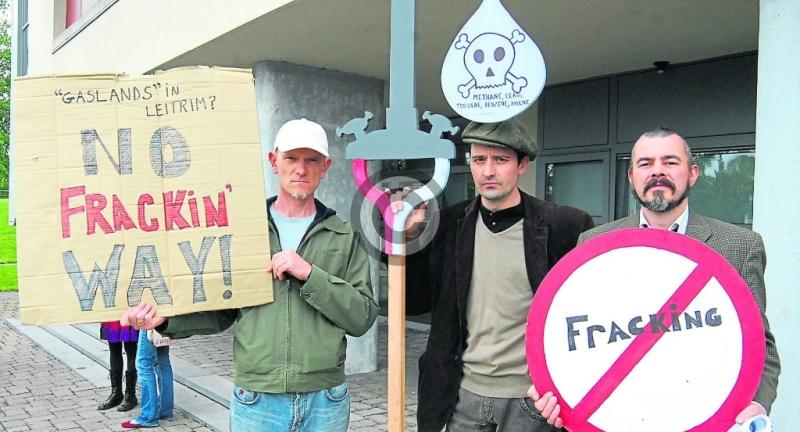 Love Leitrim is calling on TDs from across all parties to support legislation to prohibit fracking in Ireland. The bill to ban fracking will be debated in the Dáil on Thursday, October 27.

Eddie Mitchell of Love Leitrim said, "This is our time to make history. This is what we have been aiming for, a ban on fracking.”
The bill prohibits the exploration and extraction of oil and gas on land and in Ireland's internal waters. This legislation has been brought forward as a Private Member’s Bill by Sligo-Leitrim TD Tony McLoughlin.

McLoughlin has previously highlighted how fracking poses a serious risk to public health. In this bill he stresses the importance of adhering to our commitments toward measures to combat climate change.
The move to ban fracking comes after the very successful “Sign the Pledge” campaign during the general election by Love Leitrim.

The campaign saw 70 candidates, and crucially, all elected TDs in Sligo-Leitrim, pledge their support to ban fracking.
The two hour Dáil debate on October 27 is the second stage of the legislative process.

McLoughlin said he has received technical advice to the wording of the bill from “experts in the field.”

Eddie Mitchell of Love Leitrim said, "For much of this long campaign our region has led the way in ensuring that the health of our communities and future generations is centre stage.
“We are appealing to our TDs starting here in this constituency to continue to work together across parties and back this legislation to ban fracking.
“We need our elected representatives to work to secure support for this bill within their parties.
“We need them to continue to stand up for us now. We are working with them all and we thank them wholeheartedly.
“We have an opportunity to forge a terrific legacy for the country together!"

Johnny Gogan, Chair of Love Leitrim added that, however, the public also has a crucial role to play in the run up to the bill .
“This is the critical time in the campaign. We need everyone to talk to their TDs and tell them how important a ban on fracking is to you.
“So we are calling on you to pick up the phone to your TDs and leave a message.
“Write a letter, email or connect with them on social media. Pop in to their office. Do everything you can.
“We know if we all push together on this as politicians or as members of the public we can make this happen.
“We're better together.”

Love Leitrim are also currently involved in the Better Together campaign urging the public and politicians to work together to ban fracking, see their video here.