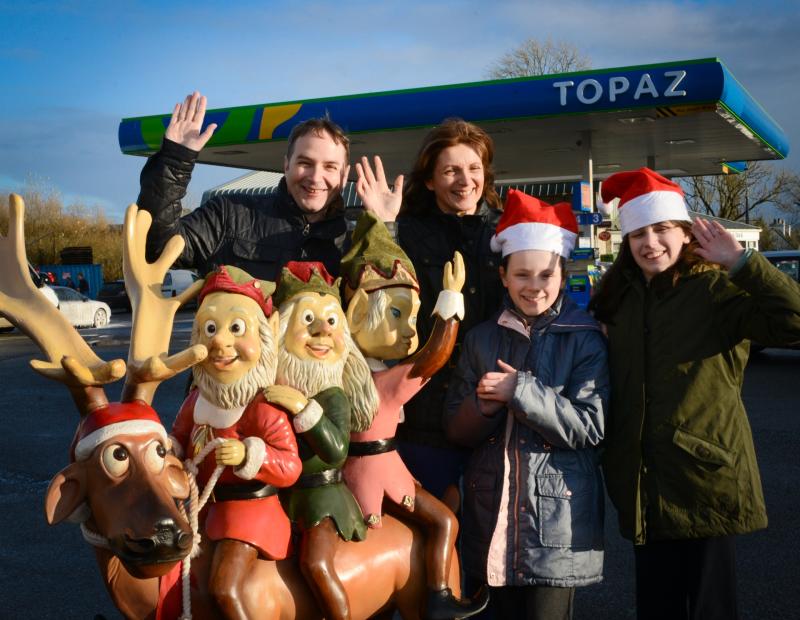 Eugene McKiver and his family from Drumsna are certainly getting into the festive spirit after he was told that he is the lucky winner of a trip to Lapland with €2000 spending money.
Topaz, Ireland’s leading fuel and convenience retailer, has announced Eugene McKiver as the October 2016 winner of Topaz Play or Park.
The total prize value is a whopping €7,500.
After choosing to play his points in his local Topaz (Kennedy's) on the Dublin Road in Carrick-on-Shannon, Eugene and his family will be kicking off the festive season in sensational style in enchanted Lapland.
Eugene, his wife, Katherine, and their two daughters, Leonie and Kristen, will enjoy a sleigh bell spectacular itinerary as part of this once in a lifetime Sunway trip, making memories that the whole McKiver family will cherish forever.
Furthermore, the family will receive €2,000 spending money.
Play or Park is the award winning loyalty game, which allows customers to collect points every time they refuel or make a purchase at participating Topaz stores.
The prize package includes:
- Return flights for the family;
·- 4* accommodation;
- Reindeer Sleigh Ride & Licence Certificate
- Snowmobile Ride and Tobogganing
- Husky Sleigh Ride;
- Trip to Jolukka Forest of Dreams
- Private meeting with Santa
- Santa Park Festive Dinner & Show
- €2,000 spending money
·Commenting on the win, Eugene said: “I was initially lost for words when I got the call from Topaz telling me that I was October’s Play or Park winner. I’ve never had an opportunity to travel to Finland, let alone the magical Lapland!
“Katherine and I have found it very hard to keep the news from the girls but it will all be worth it when we see the look on their faces when we tell them where we’re flying to!!”
With a chance of winning just like Eugene, don’t forget to play your points next month!