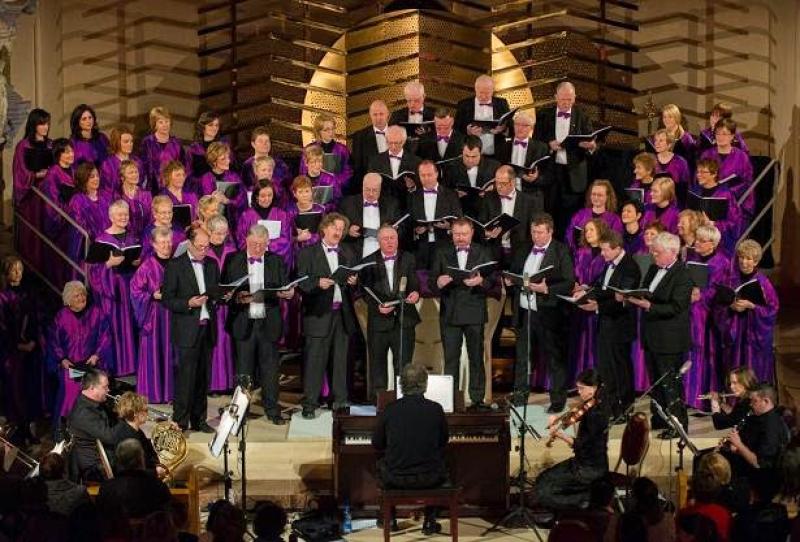 Carrick-on-Shannon's Millennium Choir (Association of Irish Choirs) will feature on a brand new RTÉ CD release of One Hundred Years a Nation, a major piece of choral music specially commissioned by RTÉ from composer Shaun Davey with text by writer Paul Muldoon and recorded with the RTÉ National Symphony Orchestra and conductor David Brophy.

The CD, issued on the RTÉ lyric fm label, will be included free of charge in next week’s edition of the RTÉ Guide (issue dated 28 November 2016). It will stand as a legacy recording capturing the full force of the memorable open-air, world premiere performance that featured 31 choirs from 19 different counties together with the RTÉ National Symphony Orchestra, narrator Paul Muldoon and conductor David Brophy. One Hundred Years a Nation was presented as part of ‘A Nation’s Voice’ on Easter Sunday, 27 March 2016 at the National Museum, Collins Barracks.

‘A Nation’s Voice’ was presented by the Arts Council and RTÉ, in association with the National Museum of Ireland, the Association of Irish Choirs and Music Generation, as part of Ireland 2016. The CD recording of One Hundred Years a Nation, featuring the voices of the Millennium Choir, has been produced with combined support from the RTÉ National Symphony Orchestra, the Arts Council, RTÉ lyric fm, and the RTÉ Guide.

Hosted by Miriam O’Callaghan the world premiere performance of One Hundred Years a Nation was presented as part of the official State programme of events on Easter Sunday. Despite driving wind and rain, the performance struck a chord with all present as well as with viewers watching the performance live on RTÉ One, and it was an easy decision to make a studio quality recording for posterity. The challenge was how and where to record 800 singers, the 80 plus members of the RTÉ National Symphony Orchestra, conductor David Brophy and New York-based poet Paul Muldoon, whose stirring narration is a hallmark of the piece. The Helix, Dublin was the chosen venue and so, on October 1st, buses from the four corners of the country converged on The Helix and the Millennium Choir reunited with their fellow choral singers, ranging in age from 8 to 85, to record this powerful new work.

The recording was one of the largest scale recordings ever undertaken by RTÉ involving over 200 microphones and hundreds of meters of cabling leading to the mobile recording unit where composer Shaun Davey sat side by side with the engineers in his role as Producer. At the centre of it all conductor David Brophy cajoled and encouraged the best performance ever from these singers from all over Ireland.

They were all more than ready for this day. In the lead up to October 1st the Millennium Choir regrouped for further rehearsals under the direction of their choral leader Alla Crosbie, who also worked with them in preparation for the Easter Sunday concert performance. The Choir was founded at the end of 1998. An SATB group with 50 members, assisted by Siobhán Talbot, the Millennium Choir performs locally, regionally and internationally, singing a mix of sacred, operatic, stage musical and popular music. Based in Carrick-on-Shannon, Co. Leitrim, singers of various ages and backgrounds come from a wide area from Longford to Sligo.

On Wednesday 21 December at 11.20pm, RTÉ One Television will broadcast One Hundred Years a Nation, featuring the Millennium Choir performing as part of ‘A Nation’s Voice’ on Easter Sunday at the National Museum, Collins Barracks.