So you think you got the worst Christmas present ever? 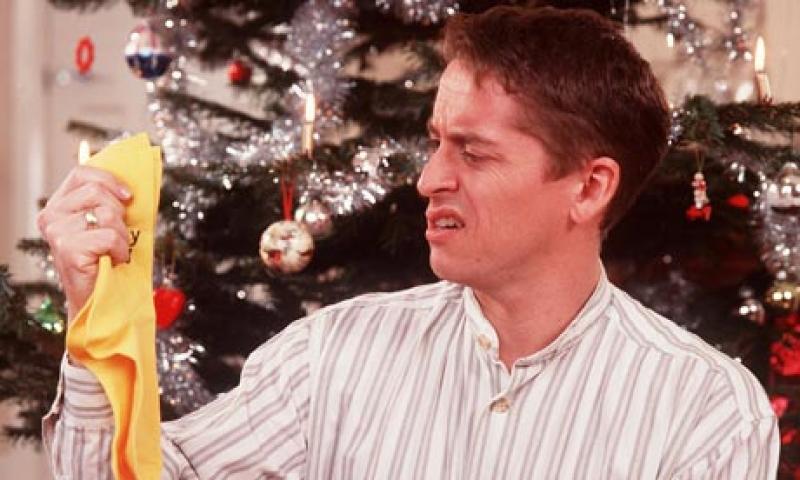 Socks are never a great present but there are worse gifts out there.

Ok, the 25th is officially over, we've emerged from the turkey induced coma and now the dissection of this year's Christmas can commence!

While you may now suspect that your Aunt Mary's special 'gift' of 23 pairs of socks may qualify you as being the recipient of this year's worst Christmas present, take heart, there are people so much worse off than you....

One Reddit user confessed that their grandmother, unintentionally, presented them with the worst gift ever. User name: ShekhMaShierakiAnni said: "I unwrapped it and it was a little tin box. I opened the box and there was a fake gift card there, like an indication of this is where you put the gift card. And I just looked at her like... what is it or whats going on? And she goes "It's a gift card holder. You can put all your gift cards in there." And I just started laughing saying noooo, you are supposed to put a gift card in here to give to someone! It was really cute though. Bless her heart."

It really was the thought that counted for Sammie-Chu, who detailed how a "fairly distant relative once gave me three promotional (freebie) vouchers for a clothes shop I didn't really like. Each gave £5 off a purchase, per £50 spent. 15 year old me didn't have enough money to be spending £50 on clothes in one go, and the vouchers had actually expired on December the 23rd."

3. A bit of a thoughtless one from mum

It's not great when you're own mother doesn't put a lot of thought into your gift. Reddit user Starringbecca's mum bought her a 3D poster, despite the fact she was visually impaired in one eye and couldn't see the 3D effect.

In something that only be described as unecessarily cruel GildedFire's parents not only ignored their child's Christmas list, they rubbed salt into the wounds.

"One year when I was a kid, my parents bought me a computer mouse," said GildedFire. What makes it bad is that I didn't have a computer, and had been asking for one for years. My parents just really didn't want me to have my own computer. Still not sure why they got me the mouse though. Just seems like a, "f*** you".

Feel sorry for gennieb7, her aunt decided that she deserved an actual rock for Christmas....

"She gave presents to me and my two older cousins and said its time for the big girls to open their gifts. She made my cousins go first and they got scarves and I opened my present and pulled a rock out of the package and looked up waiting for her to laugh and she said "isn't it wonderful??" So I had to be like yeah, I loooove it!! She then told me that she had dug it out of her garden the previous summer and she knew that I would think it is sooo cool," explained gennieb7.

But the joy didn't stop that year for gennieb7.

"The following year (my aunt) gave me acorn tops because "some people know how to use them to whistle and I don't know how to show you or explain, but I'm sure you can figure it out." She is a tad eccentric. Both were pretty terrible presents."