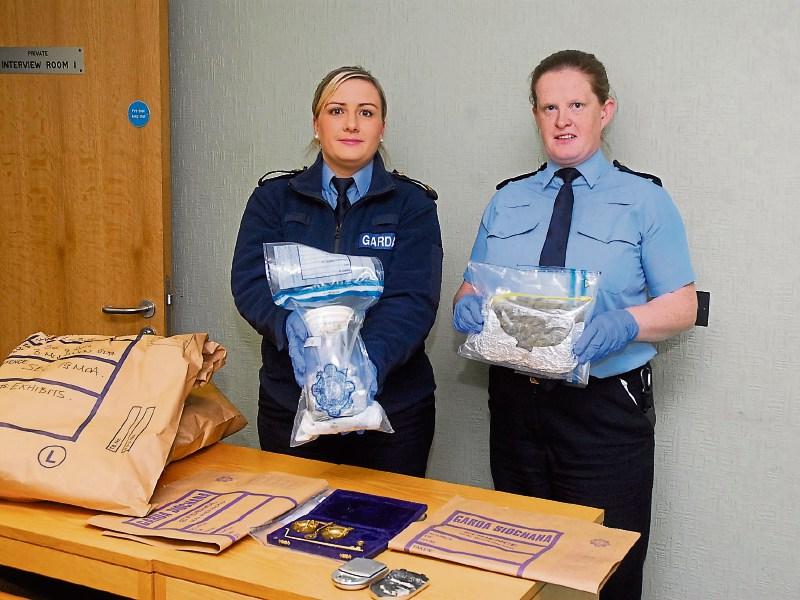 Gda Lydia Cawley and Gda Mary Burke are pictured with the €5,000 in cannabis herb seized in early October by gardai.

House prices were on the increase in Co Leitrim according to two new reports this month which showed that Leitrim properties were achieving around a 1% increase each month - welcome news for those seeking to sell properties. Local auctioneers said that a shortage in supply of housing stock for sale was also pushing prices higher than they had been for many years.

It would appear that Co Leitrim is attracting international attention for more than simply its beautiful surrounds with claims that America's National Security Agency (NSA) had added the word 'Leitrim' to its list of trigger words - that would be words which, when used excessively on social media, will draw the ire of America's security watchdog. Leitrim is the only Irish county to have made this list - to date - something we can all be ummm, proud of.

October was also the month which saw gardai seize cannabis herb with a street value in excess of €5,000 during a raid in Carrick-on--Shannon. One man was arrested and charged in relation to the find.

In sad news this month, a young mother lost her fight for life three weeks after sustaining serious injuries in a road traffic accident in Longford. 32-year-old Sarah Brady (nee Reynolds), 9 Sliabh Corglass, Moyne, Longford, died in Mullingar's Midland Regional Hospital in early October. Sarah had close connections to Bornacoola, Co Leitrim, having attended the local national school there as a child. She is survived by her husband Stephen and two children, Oisin (3) and Caoimhe (1).

North Leitrim also continued its winning ways this month with a lucky Manorhamilton man scooping the top prize of€250,000 in the National Lottery's Lotto Plus 2 draw. The winning ticket was sold at Mullin's Service Station.

There were fears of a fodder crisis looming for farmers in Co Leitrim as a result of poor weather in 2016. A Teagasc report into the impact of weather on the farming sector this year, revealed that half of farmers surveyed in Counties Leitrim, Sligo and Donegal, admitted they have inadequate winter feed to carry them into 2017.

However there was good news this month for those in Aughawillan as their Senior Men's' Team took home the Fenagh Cup after they defeated Glencar/Manorhamilton to win the 2016 Connacht Gold Leitrim Senior Championship Final. The final score was 1-10 to 0-12.

This was an important month for those opposing the introduction of Hydraulic Fracturing.

Sligo/Leitrim TD, Tony McLoughlin, introduced a Private Members Bill to the Dáil which sought to ban the process of gas extraction. Deputy McLoughlin called for cross party support for the Bill.