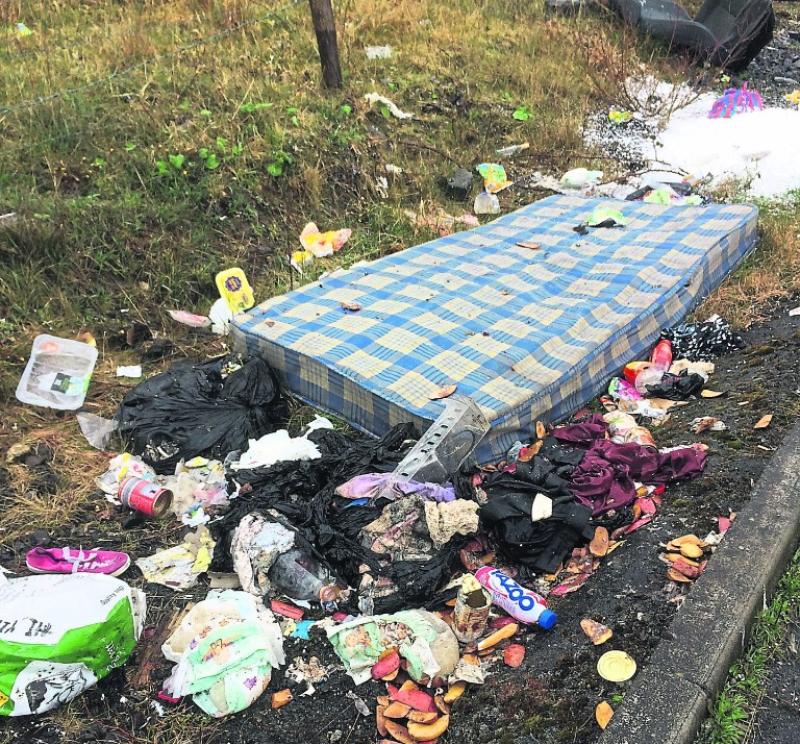 'Stop using our county as a bin' was the front page headline on the April 13 issue after photos were submitted of serious dumping in Carrick-on-Shannon.

April was a month of contrasts on the news front with several strong lead stories. Among the more notable stories was the trial of a 22-year-old Leitrim man for murder, the 'nightmare' side effects the HPV vaccine to reduce the risk of cervical cancer was having on an Annaduff teenager, and images of shocking illegal dumping that took place in Carrick-on-Shannon
The trial began this month in the Central Criminal Court of 22-year-old Leitrim native Matthew Gralton who pleaded not guilty to the killing of Christy Daly in Clara, Co Offaly on a date between December 29, 2013 and January 7, 2014. The case continued throughout the month but was later dropped.
A large crowd gathered in The Bush Hotel , Carrick-on-Shannon on April 1 for the official launch of 'Darkness Into Light 2016' for Pieta House. The launch was attended by Michael Harding, novelist and playwright, Eleanor Shanley, singer, and Joan Freeman, founder of Pieta House, as well as volunteers from Leitrim, Roscommon and Sligo.
A state of the art marina complex in Ballinamore was placed on the market with a guide price of €200,000.
Leitrim Sinn Fein's AGM was postponed after concerns about the selection convention by some members to replace Deputy Martin Kenny on Leitrim County Council.
Eleven-year-old Drumsna girl, Caoimhe Mooney, had a smash hit on her hands when her version of the song 'Grace' went viral on Facebook with over 125,000 views prompting her and Evolution Stage School Longford to record the full version in a recording studio.
Illegal dumping was to the fore once again as Lovely Leitrim's image was tainted by pictures of deplorable dumping of household waste in Carrick-on-Shannon.
Kevin McGeever, who faked his own kidnapping after being found on a road in Corraleehan, Co Leitrim in 2013, was given a two year suspended sentence for wasting Garda time.
Fifteen-year-old Annaduff teenager, Rebecca Hollidge, told her story this month of how the HPV vaccine, given to young girls to reduce the risk of cervical cancer, had turned her life into “a nightmare.”
Rebecca outlined to the paper the effects it has had on her life, some days spending 24 hours in bed, suffering pain, sickness and seizures. The Hollidge family want the HSE to investigate and examine the 330 girls in Ireland suffering form this and put in place a treatment plan. The HSE informed the Leitrim Observer that there are no known long term side effects from the vaccine.
Figures from the Central Statistics Office for the final quarter of 2015 were released this month and showed just 23 planning permissions were granted in Co Leitrim, putting the county as the lowest in the county in terms of the number of planning permissions granted for that quarter.
Gardai were investigating the theft of €30,000 worth of cigarettes from a commercial vehicle in Ballinamore on April 14. The incident was linked to the theft of power tools in Carrick-on-Shannon earlier the same day.
The Friends of St. Patrick's Hospital met with local TDs to outline its case for the reinstatement of a five day nurse-led day hospital service as they felt it was now a matter to be placed in political hands.
Renowned journalist James Downey from Dromahair was laid to rest in Creevelea Abbey. Tributes to the former Irish Times and Irish Independent writer were led by President Michael D. Higgins.
Marking 30 years since the Chernobyl nuclear disaster, an articulated truck filled by the people of Co Leitrim was part of a convoy of trucks that travelled across Europe to deliver much needs goods to the Vesnova Children's Mental Asylum and surrounding areas.