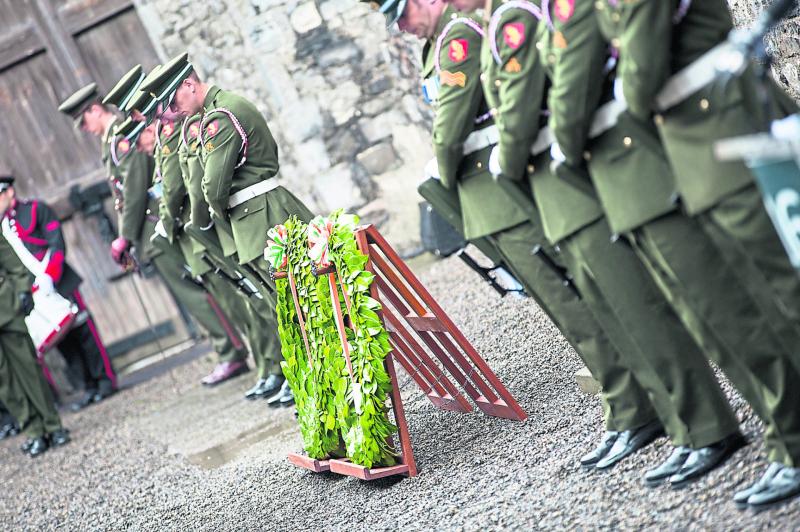 Members of the Defence Forces bow their heads in remembrance of 1916 hero Sean MacDiarmada at a special event in Kilmainham Gaol marking 100 years since he was executed.

May was a poignant month with commemorations taking place to mark the anniversary of the Easter Rising and the execution of Proclamation signatory Sean Mac Diarmada. There was also concern about the school transport scheme, a plea to save the village of Kiltyclogher, and jubilation as Kinlough's Breege Connolly confirmed her place on the Ireland team for the Rio Olympics.
Relatives were joined by members of the Defence Forces in the stonebreaker's yard in Kilmainham Gaol in the early hours of May 12, the exact date and time of the execution of Leitrim's most famous patriot, Sean Mac Diarmada. The commemoration was one of many held throughout the country.
Here in Co Leitrim, commemorations were held over several weeks by various groups, particularly focused on the Kiltyclogher area of north Leitrim from where Sean Mac Diarmada hailed. Mac Diarmada was seen by many as “the mind of the revolution.”
In a somewhat related story, Cllr Sean McDermott pleaded with Leitrim County Council for “the last chance to save Kiltyclogher.” He called for the village to be designated as a 'Heritage and Cultural Village' due to it being the birthplace of Sean Mac Diarmada and he said they must seek the necessary resources to support it from the Minister for Arts, Heritage and the Gaeltacht.
The almost constant struggle for proper high speed broadband in the county continued as the Department of Communications confirmed that it would not be in a position to commence negotiations with shortlisted bidders as planned this year.
The “complete and utter inflexibility” of the current school transport scheme was described as another nail in the coffin of rural Ireland when councillors expressed their views to representatives of Bus Eireann this month. Local councillors said the rigid criteria was threatening the future of some rural schools.
Tributes were paid to the popular founder of the Solas Art Gallery in Ballinamore, Sandra Vernon, who passed away this month.
A murder charge against a Leitrim man, Matthew Gralton, was dropped t in the Central Criminal Court.
A High Court action against Facebook over allegedly defamatory posts by a group supporting the lawful restoration of Sean Quinn's family to control his businesses was struck out. It followed Mr Quinn's intervention and his request that the group calling itself 'Concerned Irish Citizens' to remove the Facebook page in question.
Annmarie Keegan, aged 26, from Aughavas, was chosen as the 2016 Leitrim Rose of Tralee in The Bush Hotel to represent the county at the International Rose of Tralee Festival in August.
St. Mary's Church of Ireland, Mohill celebrated its bicentenary on May 21.
Kinlough's Breege Connolly joined a very select group of Leitrim athletes to compete at the Olympic Games. The marathon runner became the county's fifth Olympian after she was named in the Ireland team to compete at the Rio de Janeiro Olympic Games.
Breege joined Eddie Leddy and Colin Griffin from Ballinamore, Laura Reynolds from Eslin, and Frances Cryan from Carrick-on-Shannon as an Olympian.
Businessman Sean Quinn and his son Sean Quinn Junior, left their roles as consultants to Quinn Industrial Holdings Ltd after a difference of opinion between Mr Quinn and the Board of Directors of the company.The Board stated it had become evident that Mr Quinn's expectations for his role and the ownership structure of QIHL were at odds with the strategic direction of the businesses.
Arigna Mining Experience was named as one of Ireland's Top 10 Landmarks in the TripAdvisor's Travellers' Choice Awards.