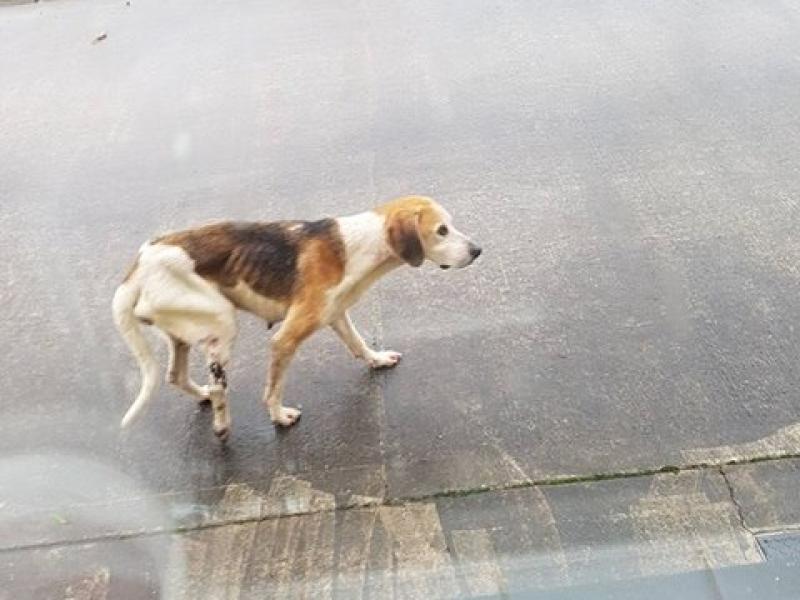 The image of the injured dog was posted on a Dromahair community page last week.

Leitrim's Dog Warden, Ciara O'Kelly, has appealed for the owner of a stray dog, seen in and around the Dromahair area in recent days to immediately contact her.

A picture of the emaciated and injured hound was posted on a Dromahair community Facebook page over the weekend after it was seen wandering in the locality.

Since then there have been unconfirmed reports that the owner of the dog has come and collected it. However Ms O'Kelly is urging the owner to contact her at Leitrim Animal Welfare to confirm this is the case.

"We want to be able to confirm that the dog has been collected by the owner and to also follow up on the current welfare of the dog," she said.

The Dog Warden said that she is able to confirm the animal is not a stray from a Leitrim hunt pack. After an incident where two stray hounds caused a significant amount of damage to livestock in the Drumshanbo area in 2015, Ms O'Kelly and the County Veterinarian, James Madden, worked with the local hunt clubs and ensured that all hounds were subsequently microchipped.

"I have checked with (the Masters of the Hunt) and all dogs are accounted for so this is not a dog from a Co Leitrim hunt club," said the Dog Warden.

She has urged anyone who has seen this or any stray animal to immediately contact her at Leitrim Animal Welfare on 071 9648300. The Dog Warden is not only trained in the sedation and care of injured animals, she can also follow up any welfare concerns, legally, for animals in Co Leitrim.

Ms O'Kelly is based at Leitrim Animal Welfare, near Drumkeerin. Leitrim Animal Welfare took over the operation of the Dog Pound for Co Leitrim in 2004 and operate under a strict 'no-kill' policy. Meaning all healthy stray and abandoned dogs are provided with veterinary care, spayed/neutered and microchipped before re-homing. They are cared for no matter how long it takes for them to find a 'forever home'.