Return of the O'Sullivan's to Co Leitrim 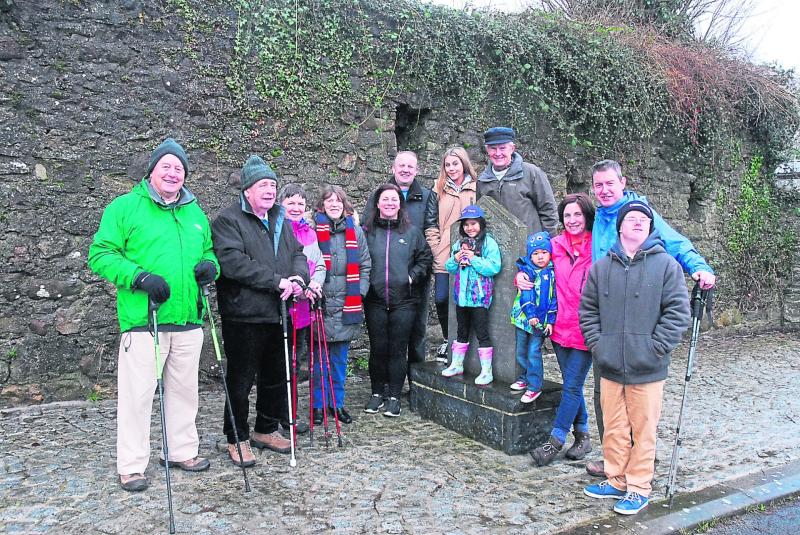 Members of the O'Sullivan and Meehan families from Dublin pictured at the ruins of O'Rourkes Castle in Leitrim Village .

Patrick O’Sullivan from Dublin, along with his father and some other members of his family, set out on the O Súilleabháin Beara Way over a three-day period from Thursday, January 12 to Saturday, January 14, and arrived at O'Rourke's Castle in Leitrim exactly 414 years after Donal Cam OSúilleabháin! This is his story:

Having completed our initial odyssey across Ireland, from Dollymount to Dursey Island in 2010, my father and I wondered what we should do next.

We looked at various options for continuing our annual walking holiday that had begun in 2005. But, now in the Beara peninsula and exposed to the stories and sights of our clan (we are both Patrick O'Sullivan), we were left with no choice.

Our new adventure was to consist of us walking the OSúilleabháin Beara Way from West Cork to Leitrim. One week per year.  It would be another epic trip for us.

It also had a crucial additional ingredient – my parents-in-law, Michael and Pauline Meehan, who had been such an essential part of our trek to Dursey, would be continuing to walk with us, and their family name hails from the hinterland of Leitrim! It seemed that destiny itself was urging us on. Along with my wife Linda and my 3-year old daughter Thúy Vinh, the travelling party was complete.

When I first researched the OSúilleabháin Beara Way back in 2010, I discovered that the entirety of the route was much less known than any of the walks we had previously attempted. Indeed it wasn’t (and still isn’t) even mapped out in some areas.

It struck me then that such a state of affairs was a modest legacy, to say the least, for a moment in Irish history of such heroic proportions.

Having been besieged by Crown forces and facing certain starvation, O'Súilleabháin Beara left Glengarriff on New Year's Eve in 1602 with 1000 of his people. With minimal provisions, and in horrendous mid-winter conditions, they attempted to march north to the safety of the O'Rourkes in Leitrim. Despite a lack of food and under almost constant attack from other Irish chiefs along the way, the 500km journey was completed in two weeks and the last of the Gaelic Chieftains, Donal Cam O'Súilleabháin Beara, reached the O'Rourke castle. Only 35 of the original party made it.

And so to our somewhat less arduous trek. Using a variety of books and whatever information we could glean from Beara Tourism, we set off from Glengarriff in the summer of 2011. On that holiday we rented a house in Ballingeary and hiked across the beautiful Cork countryside, via Gougane Barra and Ballyvourney, as far as the slopes of Clara Mountain, south of Millstreet.

In 2013 we based ourselves in the Glen of Aherlow and marched into County Tipperary, passing Cappawhite and Hollyford before finishing that year in the alluring village of Upperchurch.

In 2014 we based ourselves in Ballingarry in North Tipperary. That was the year we crossed the Shannon but we did so in a manner that was special beyond words.

Intending to cross at Portumna, as per the publicised route, we got talking to David Broderick, a local historian, and Lil and Denis who ran the local pub, and to say they were kind and hospitable isn't the half of it.

They were as intrigued, it seemed, with us pursuing the walk as we were impressed with their historical knowledge of it. Denis and some of his friends arranged to take us across the Shannon on their boat and not only that but at the very spot where O'Súilleabháin Beara himself had crossed more than four hundred years previously! They even treated us to an impromptu poetry recital as we crossed the hallowed water.

They told us that we were the first walkers they had met to be following the route as an independent, as opposed to an organised group.

That evening, as we munched through the crab claws and shell fish provided free gratis by Lil, washed down with a pint and a heap of sunshine, we were simply floating on air!

A tragic burden and a wonderful blessing both visited our family in 2015. In February, over a 6-week period, Michael lost his sight. There was no accident, no forewarning - the doctors said it was akin to a stroke on his optic nerve. Sadly it was irreversible. Yet despite this awful shock, Michael was as determined as ever to carry on, and with the support of the rest of the party, but especially his wife Pauline, he continued bravely north.

Our blessing arrived in November of that year when Linda and I adopted our second child from Vietnam - a 2-year old boy named Huy - and our marching party now had another warrior in tow.

In 2015 we stayed in Mount Talbot in Roscommon and walked from Melick on the banks of the Shannon, through East Galway via Ballygar, as far as the slopes of Mount Mary. And in 2016, we based ourselves in Williamstown and walked from Mount Mary, across to Sliabh O'Flynn and Lough Gara and on to the foot of the Curlews.

And so to the present day. We estimate we have about 35km left to do and are allowing ourselves 3 days to comfortably achieve this.

Our route will take us across the Miners Trail to Ballinafad and on to Knockvicar before making the last stretch to Leitrim Village.

When we finally get to Leitrim on Saturday, there will be a quiet moment to take it all in and then no doubt a bit of a hooley.

So as we conclude our travels we have a lot to reflect on. The challenges of the walk along with the wonder of what we have enjoyed, together, on each and every day of our journey, have mirrored our lives over the period. With each rising hill, with each bend in the road, we have learned a little bit more about ourselves and our place in this universe.

Unlike Donal Cam, this O'Sullivan party grew in number over the course of our journey. This time around, 414 years later, the pleasure has been all ours.

Donal Cam eventually set sail for Coruna in Galicia in North-West Spain. Around 800 of his people also travelled to Galicia and O'Súilleabháin became the head of this Irish community.

He received a title and a royal pension from King Philip III of Spain, and his princely status was thus reconfirmed. And with his work in helping found the Irish College in Santiago de Compostella, he was central to establishing an enduring link between Ireland and Galicia.

I have often thought about the cultural and historical links between Gailica and Ireland. Galicia is of course the end-point for one of the most famous long distance walks in the world - the Camino de Santiago - tracing as it does northern Spain, 'til it reaches its final destination of Santiago de Compostela, a town and a region with direct links to OSúillabháin Beara.

Official statistics from the Pilgrim's Office in Santiago confirm that literally hundreds of thousands of walkers make their way along the Camino each year. Yet the long march of O'Súilleabháin across

Ireland is hardly known, even within Ireland! With a little imagination and will surely the powers that be could harness the resources needed to develop the huge potential of this walk, potential it has in its own right but also as a prospective companion trail to the Camino.

It is a source of frustration that we in Ireland often do not recognise and value that which we have; the OSúilleabháin Beara Way is one such example.

But for now we seven pilgrims will zip up and march on, smiling.