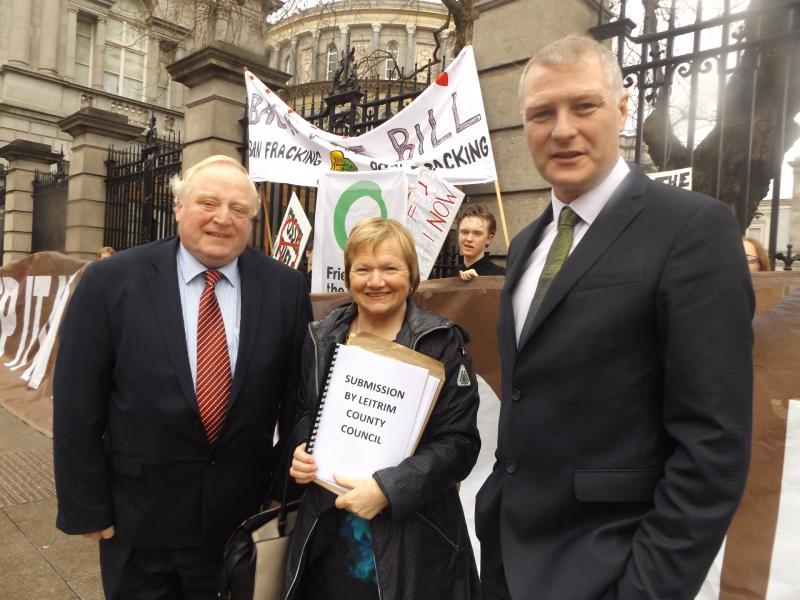 The consultation was called in late December and organisations and individuals are being asked to send in their submissions with the closing date now extended till Feb 10th.  The bill was voted unanimously through the Dail on October 27th but subsequent to that decision, the public consultation was announced.

Submissions were delivered on the day from Love Leitrim, Leitrim Co Co, and GEAI as well as 250 farming petitions gathered by local Leitrim farmer Michael Gallagher. Love Leitrims’ submission recommendations were to pass the bill in its current form to the next stage, to not delay in that aim or water it down.

Submissions were presented to Hildegarde Naughton, the Chair of the committee scrutinising the bill.  A hand made St Brigids cross from Leitrim to commemorate the day, and to warn off danger and protect from harm was also presented to the Chair.  Friends of the Earth also delivered a petition with 7,500 names that they and Uplift had gathered online.

A recurring theme at the press conference voiced from representatives, was a concern that the bill was being delayed.

Tony McLoughlin TD who sponsored the bill reminded the people present that the bill was only part of the way there. He said  “We cannot afford delays of any kind” He urged that the bill get clear passage with ”no ifs or buts”

Eddie Mitchell of Love Leitrim said “The only thing that can stop this bill is if people want to hold it back."

Martin Kenny TD of Sligo Leitrim reiterated that sentiment, even though a ban in fracking was voted for unanimously through the Dail, there were still forces behind the scenes promoting fracking.  He said ‘There are vested interests pulling strings”.

Brid Smith TD said that she was “worried that they are dragging it out, to make the bill fall.’  Heightened public pressure to ensure the bill continues without needless delays she felt was now the priority.

To that end the crowd was reminded that the Friends of the Earth and Uplift petition was still online for people to sign.

A vision of a frack free country was one that was in sight.

Kate Ruddock of Friends of the Earth rounded off the conference to say that ‘Fracking plays no part in our future.”