A million minutes of physical activity by Leitrim club 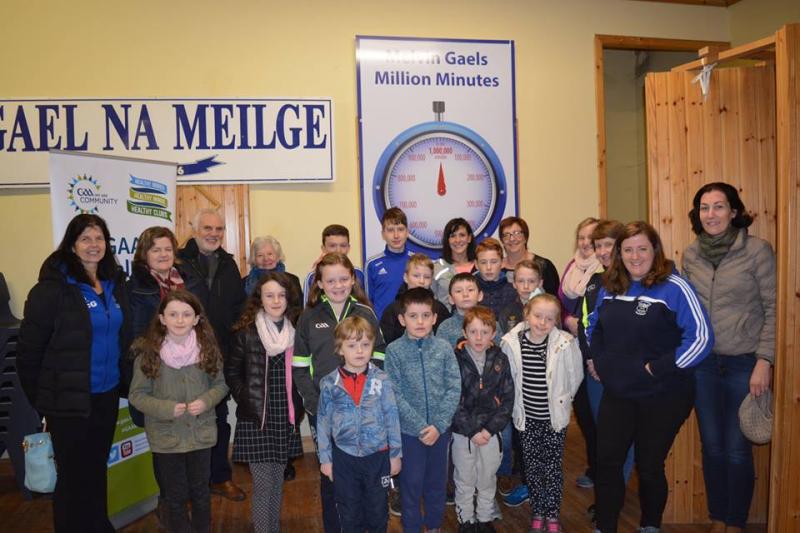 Thanks to a monumental effort by the local community,  Melvin Gaels club’s idea of logging a million minutes of physical activity in eight weeks has been achieved. The final tally logged on Friday March 3 was 1,154,283 minutes of activity.

Launched by local Olympic hero Breege Connolly on Friday, January 13, the initiative was part of the club’s involvement in the GAA’s Healthy Club project. The challenge captured the imagination of all elements of the local community, young and old, from families and individuals to schools and businesses.

They all contributed by logging their minutes each week, gathering each Friday evening for a health-related discussion in Kinlough Community Centre, joining the walking/running group each Saturday evening, or by kindly donating prizes or running classes for those taking part.

The online log book revealed the broad variety of physical activity that locals are engaged in each week, ranging from the ever-popular walking to yoga, cycling, athletics, karate, gymnastics, horse-riding, strength and conditioning, surfing, kayaking, gardening, dancing, tai-chi, to good old fashioned play.
The idea was the brain child of the Melvin Gaels’ Healthy Club project team leader, Katherine Williams, who is ably assisted by Mary McSharry, Ciara Barrett, and Mary Rooney. Katherine and Mary outlined the format of Million Minutes challenge at the recent Connacht Healthy Club Roadshow in Ballyhaunis which was attended by almost 150 people including representatives of 54 other clubs from the province, several of which expressed interest in replicating the idea in their own communities. They were joined on stage at the event by Healthy Clubs ambassadors Anna Geary, Philly McMahon, Michael Fennelly, and Mickey Harte.

Melvin Gaels is Leitrim’s sole representative in phase two of the GAA’s award winning Healthy Clubs project, which involves a total 60 clubs, at least one in each of the 32 counties. It is supported by Healthy Ireland, the HSE, National Office for Suicide Prevention, and by Irish Life. The project aims to support clubs in becoming hubs of health for their communities.

If you are interested in health and wellbeing and would like to get involved in the Melvin Gaels’ Healthy Club Project team why not contact Katherine Williams on mrskatherinewilliams@gmail.com or by calling 087-2870086.