No stopping Denis after 60 years in the same job 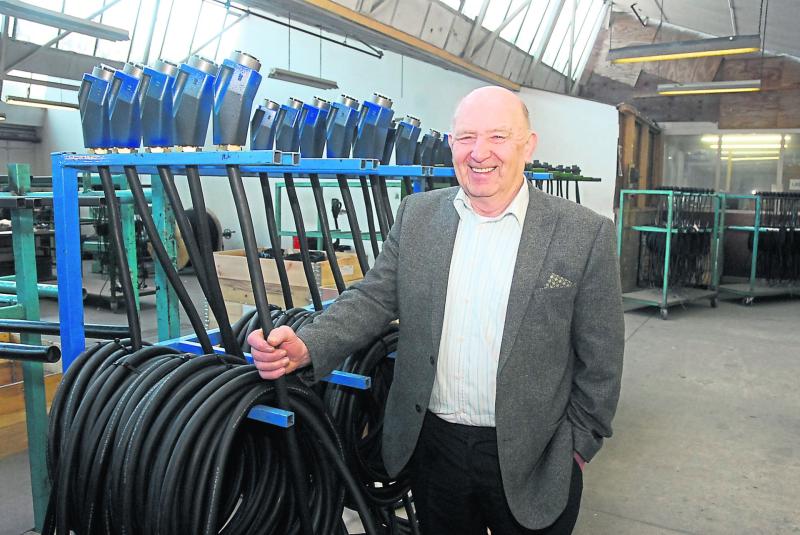 Denis O'Brien (77) in the factory where he has worked for 60 years.

“I’m going to keep going for another while” says Denis O’Brien after 60 years working in the same factory in St Patrick's Park, Carrick-on-Shannon.

77-year-old Denis just won’t stop working, he is happy and healthy and just doesn’t see the point of retirement.

It is hard to believe this young looking man has been working since he was 17 in the factory now known as DY Electrical Accessories Ltd.

After six decades of “labour intensive” work, company and manager changes, plenty of different staff, new products and extraordinary changes in technology and workplace health and safety, Denis is more than happy to continue to work “while my health allows me.”

As the rest of us dream about retirement, turning off the weekday alarm clock and kicking up our feet, Denis couldn’t think of anything worse than no work.

He says it “keeps me going.” The Carrick man has no date in sight for when he will hand over the baton, he enjoys that he doesn’t have to work full time and says if his boss is happy, he is happy.

“I don’t know what I would do with myself if I wasn’t working,” he admits. Denis has some land which he farms also, but he couldn’t stand the idea of being at home idle.

Denis remembers searching for work as a youth, in an effort to avoid emigration to England to join his brother. He wanted to stay at home, but there was “very little - no work here.”

The 17-year-old met Pauline Guckian, who worked in the factory office and she said she would get him an interview. “I got in straight away, I was lucky” he added. And so young Denis started his weekday commute on push bike from Leitrim Village to Carrick-on-Shannon on March 19, 1957.

“I started out mucking around, drilling plastics, doing mouldings,” then he was promoted into the tool room with Maintenance Manager Johnny Edwards. “I went on from there, I trained to be a fitter and eventually took over his role.”
Jack Dolan was the accountant when he started but he moved across the road shortly afterwards to a new enterprise.

The factory fondly remembered as The General Plastics was owned by Ward and Goldstone when Denis started. Not only did he see “hundreds of men and women pass through the doors” he also saw a few owners too. The factory changed to Wessel and then to John Dwyer’s DY Electrical.

He said he remembers very little heat in the factory away from the machines. Despite the cold he said “there were no complaints, people were happy to have the work.”

The produce has changed down the years from electrical accessories such as switches to plugs, propeller shafts for boats to the submersible cables, they now make.

Denis said there was no intensive training when people started, we “learned as we went along.”
Denis met his wife Maureen Shanley in The Mayflower and when they married they moved to Drumshanbo, so he had even further to cycle to work! He remembers “everyone would be here at 7.50am.” He said there was weekend work during busy spells.

At that time you clocked in and out - “that is gone a long time now.”
His first wage was £4.19 shillings which he says was “a good rate at that time,” adding, “I still had to give up some of that at home for my keep.”

He recalls it was manual work, with “no health and safety” or comfort. He said technology has helped but the work now has to be exact and precise.

“Every youngster from around was in here at some time,” he recalls. When Denis started work there was a 70 strong full time staff which swelled to 110 in the summer with student workers. Now the factory employs 14 full time, and they are a loyal staff. Three ladies have worked for over 40 years in the place!

Denis was promoted to Maintenance Manager and on to General Manager, a role he still holds.
He praises the loyal staff in the factory, he said he does not work a full day anymore but calls in and out, he states everyone works hard and there is no need for a constant boss to oversee work.

“I am happy enough here,” he concludes. Denis and Maureen have five children Veronica (Vobe Interiors) Denis, Damien, Darren and David, most who live close by. Denis has 14 grandchildren.
Have his children told him to it is time to retire? “They have but I don’t listen to them” he replies laughing.

DY Electrical Accessories Ltd are the second biggest suppliers to Sulzor in Wexford who produce deep well pumps. They produce cables and accessories for pumps.

Denis is having a celebration in The Bush Hotel, Carrick-on-Shannon on March 18 with staff and family to mark his 60 years in the factory.