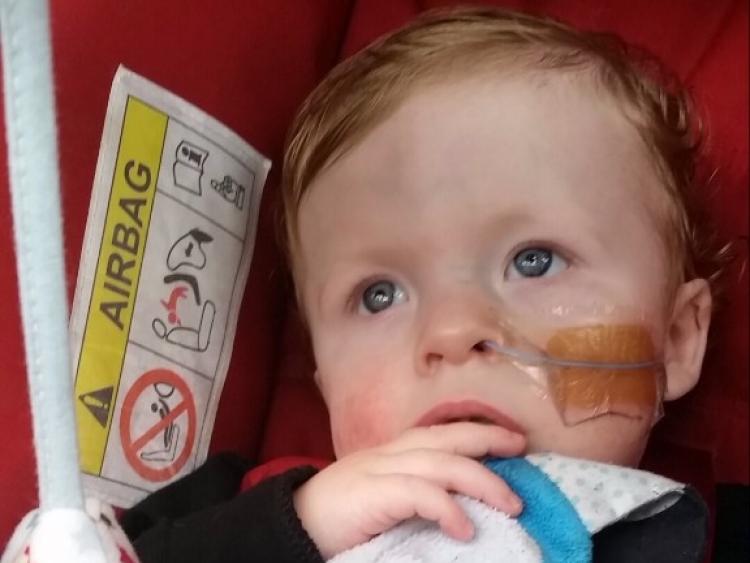 The family of a 14-month-old Ballinamore baby with a rare syndrome are at their “wits end” and have taken to fundraising online to raise the money for nursing care at night.

Baby Tyler was born with a genetic disorder known as Digeorge Syndrome or 22Q Deletion Syndrome. It is unknown what the future holds for him, but for now due to sleep apnea and feeding by tube he needs 24/7 attentive care.
Tyler's parents say the HSE granted them two nights of nurse care before Christmas but the nurses have still not been placed.
Tyler’s father Shane O’Connor say they are at their “wits end” and need nurses at night to monitor him, his mother Rosie Cassidy told the paper “we are beyond exhausted” and need help.

With sleep apnea, the baby holds his breath while sleeping and needs to be monitored carefully.
He is hooked up to an apnea and stats monitor while he sleeps, and caregivers need to be ready to alert him or even resuscitate if he stops breathing for long.
The Jack & Jill Foundation has supplied nurses for two nights a week, but Tyler’s exhausted parents Shane and Rosie need more help.

Shane and Rosie said they have asked for meetings with the HSE nursing managers of this region but were “turned down straight away.” Shane explained that they have sent “countless emails” but they “have all fallen on deaf ears.”
The frustrated parents have set up a fundraising page to help hire nurses for some of the remaining nights.
They are now almost half way to their fundraising goal of €3,000 to pay for night nurses.

The parents of 14-month-old Tyler have set up a GoFundMe Page in the hope of raising money for night nurses to help care for their son.
Parents Shane O'Connor and Rosie Cassidy from Ballinamore say they were left with no other choice but to fundraise for nursing care for their son as they are “beyond exhausted.” They want to raise €3,000 so they can employ a nurse two nights a week to help monitor and care for beautiful baby Tyler.

Rosie explained they set up the GoFundMe page as “we are sick of waiting, we had to do something.”
She said there are over 100 families in the 22Q Ireland support group. She said the reaction to the fundraising has been positive as many people did not know that Tyler had a syndrome.
Although the funding is important to the family what they really want are the nurses granted by the HSE. Rosie added that another family in Manorhamilton are also waiting on HSE nurses to be allocated.

To donate to the fundraiser visit: https://www.gofundme.com/tylers-22q-syndrome-fight