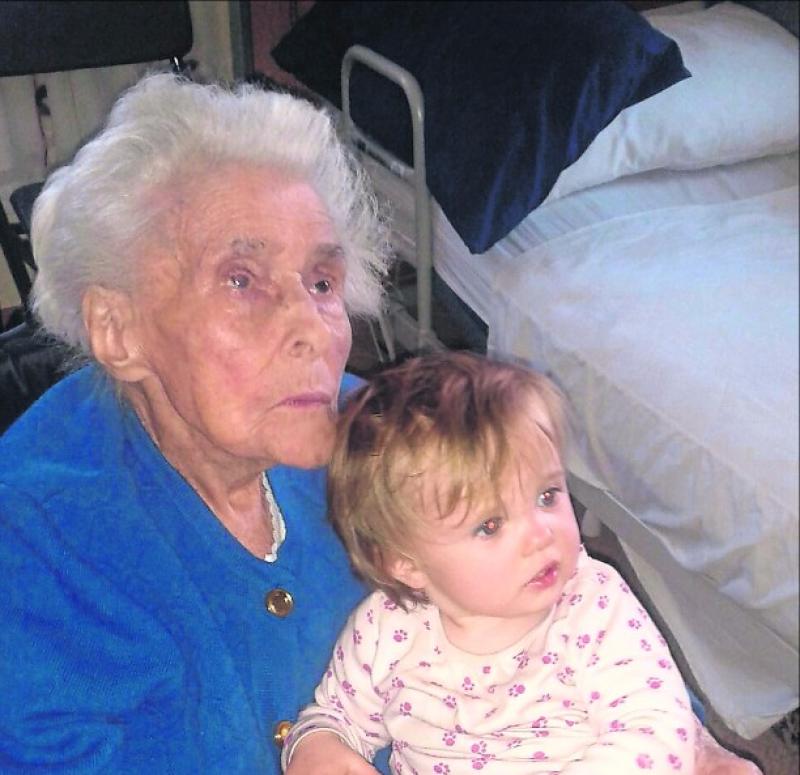 The late Elizabeth Gallagher with her youngest great-granddaughter Hannah.

Her funeral mass was celebrated on Tuesday 28th March 2017 in Saint Brigid’s Church Ballintrillick in the diocese of Kilmore.

In his homily Fr. Keogan recalled some of the events of a long action packed life.

Elizabeth was born Elizabeth Rooney in Moneygold on 15th September, 1908. She married Martin Gallagher from Ballintrillick in 1943. They had three children, son Hugh Gallagher, Ballintrillick, and daughters Mary McGowan, Ballyshannon and Bridie Regan, Athleague. She had ten grandchildren and eleven great-grandchildren.

Her father died when she was only three years old. She went to Cairns NS and helped out in the house and on the farm in the evenings. She worked hard all her life but said she was always happy.

She enjoyed using her spinning wheel, knitting cardigans and jumpers. She could turn her hand to anything, crochet, basket making, making sheepskin rugs. She often spoke of how self-sufficient people were at that time; she grew her own vegetables, had her own eggs, made butter and jam, baked soda bread and her Christmas cakes were always a treat.

A lover of nature she was never happier than when she was in her flower and vegetable garden. She had a very strong faith and was deeply religious.

The frightening times of the Black and Tans era left a lasting impression on her as did the hardship of living through two world wars.

Twelve days after she was born, Henry Ford’s first Model T car came off the assembly line. That was the start of the extraordinary advances in technology and in the quality of people's lives that Elizabeth was to see during her lifetime.

She enjoyed exceptional health and was a very independent person living on her own up until about a year ago. She took great pride in her appearance and loved her style.

In December 2016, Elizabeth became the oldest person in Ireland and she was very proud of that.

Fr. Keogan remarked that she was very aware that she herself was history in the making. St. Brigid’s Church in Ballintrillick was full to capacity for her funeral mass as family, friends and neighbours gathered to celebrate her very long, fruitful and happy life.