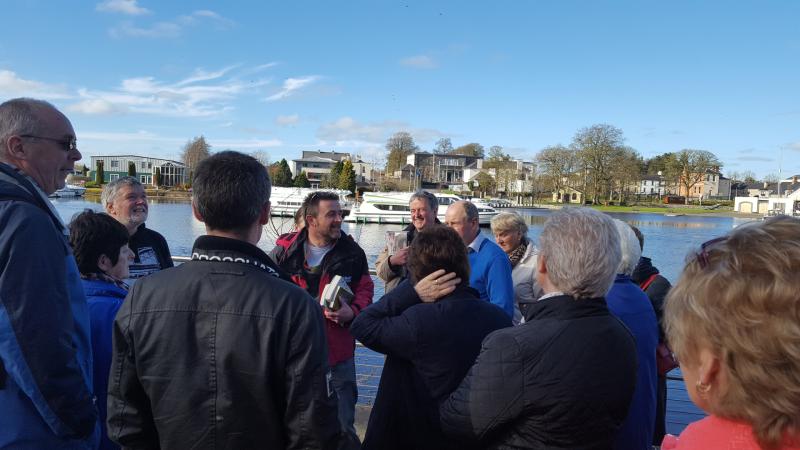 Biodiversity walk along the Shannon

Over sixty people gathered from Tidy Towns groups in the Bush Hotel in Carrick-on-Shannon last month for a Networking for Nature event organised by Leitrim County Council and the Waters & Communities Office.

Joseph Gilhooly Director of Services with Leitrim County Council welcomed and commended the Tidy Towns on the excellent work they do in their communities.
Padraig Mc Shera (Area Engineer) and Carmel Coll (Environmental Awareness Officer) highlighted the resources available to support Tidy Towns Groups with their efforts.

Tidy Towns groups from Roscommon, Sligo, Longford and Cavan joined 20 people from Leitrim Tidy Towns groups to learn and share experiences on how they could enhance their waterways and support biodiversity as part of the National Tidy Towns Competition.

Bernie O’Flaherty and Karen Kennedy from the Waters & Communities Office emphasised the value of our water catchments and the importance of reconnecting with our rivers and lakes as they provide a wide range of benefits for all of us including health and wellbeing. They also gave practical examples of how local groups can get involved in protecting and managing their own local water environment and encouraged communities to have their say on the Draft River Basin Management Plan for Ireland through consultation events being organised by the Waters & Communities Office over the coming months.
Guest speakers included Emer Brennan from Monaghan Tidy Towns Network who encouraged groups to go and visit other Tidy Towns as their network had benefited from a recent visit to Letterkenny.

Also on hand to offer support were Leitrim Development Company, Inland Fisheries Ireland, Waterways Ireland, The Organic Centre and BirdWatch Leitrim to provide advice on funding and other resources available to Tidy Towns groups.
The day finished with a biodiversity walk and talk in glorious sunshine along the boardwalk and River Shannon led by Billy Flynn.
There will be community consultations events on the draft River Basin Management Plan announced by the council shortly.