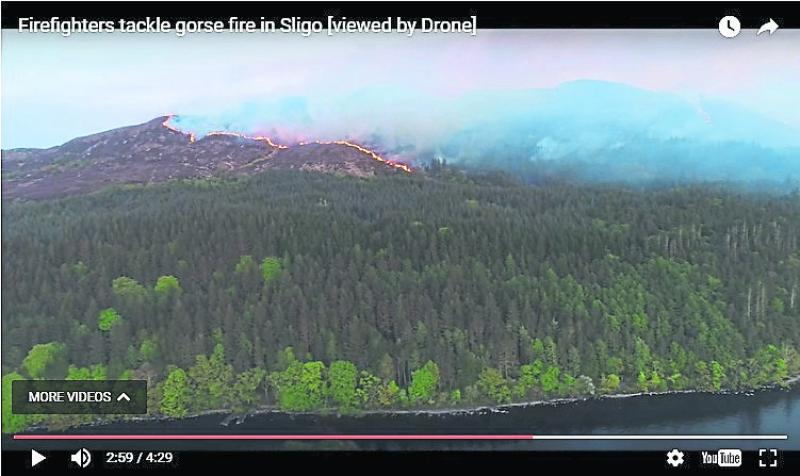 A gorse fire on the Sligo/Leitrim border.

Leitrim's Chief Fire Officer, Finian Joyce, is appealing to landowners not to light any fires in the wake of a number of serious blazes in the region over the past few days.
Soaring temperatures and strong winds have seriously increased the fire risk and Finian Joyce told the Leitrim Observer that the period of high risk will continue into the coming weekend.
Already the region has seen a number of serious fires.
Last week Leitrim fire units were called to help units in neighbouring counties to battle blazes on the Sligo/Leitrim border on the Killerry mountain and also in the Drumshanbo/Arigna area.
At one point all Co Leitrim fire units were called to fight the fire near Arigna which took hold on Wednesday evening last. The battle to contain the blaze continued until Saturday morning.
The blaze on the Killerry mountain last week led to the R287 road from Dromahair to Sligo being closed for a period of time and the Coast Guard helicopter was deployed to assist with containing the fire as two homes came under threat last Wednesday.
Dramatic videos and images of the fire were posted online which give an indication of the scale of the fire.
Over the weekend the popular Cuileagh Boardwalk on the border of Cavan and Fermanagh was closed because of a heather fire on the mountain. The boardwalk was reopened on Monday afternoon.
The Co Leitrim Chief Fire Officer has noted that the dry weather of the past few weeks is forecast to continue for the coming week and there is a considerable high risk of further outbreak of bog/ gorse/ forest fires occurring.
“Forest owners, farmers, rural dwellers and other countryside users are asked to be vigilant to help prevent the outbreak of such fires occurring,” he told our reporter.
It is an offence to cut, grub, burn or otherwise destroy any vegetation growing on any land not then cultivated between March 1 and August 31 in any year.
This includes the burning of rushes, gorse and heather on bogs.
It is illegal at any time for households to burn rubbish and this practice is even more dangerous at this time of year as a stray spark could cause a serious fire.
Members of the public are asked to report any suspicious or illegal activity to Gardai immediately. Landowners found responsible for lighting fires illegally will be issued fire bills by the fire authority.
“Landowners wishing to carry out prescribed burning during the legal period for doing so, must notify in writing all forest owners within one mile, and the local Garda station between 7 and 35 days in advance of any controlled burning operation,” explained Mr Joyce.
“All controlled burning operations should be notified to the Fire Service before burning commences. Landowners found burning illegally could face fines, imprisonment and Single Farm Payment penalties, where applicable.
“If you see a fire, do not delay; report it to the Fire and Emergency Services straight away.
“Do not wait for somebody else to make the call. Dial 999 or 112,” urged the Co Leitrim Chief Fire Officer.
“Give clear details as regards location, where at all possible, and any other useful information such as the size of the fire, wind direction, proximity to dwellings or forestry etc.
“You will not be billed by the fire service or local authority for making the call. Do not attempt to tackle fires alone or without adequate training or protective equipment.”