Service is 'swamped' and not doing what it should 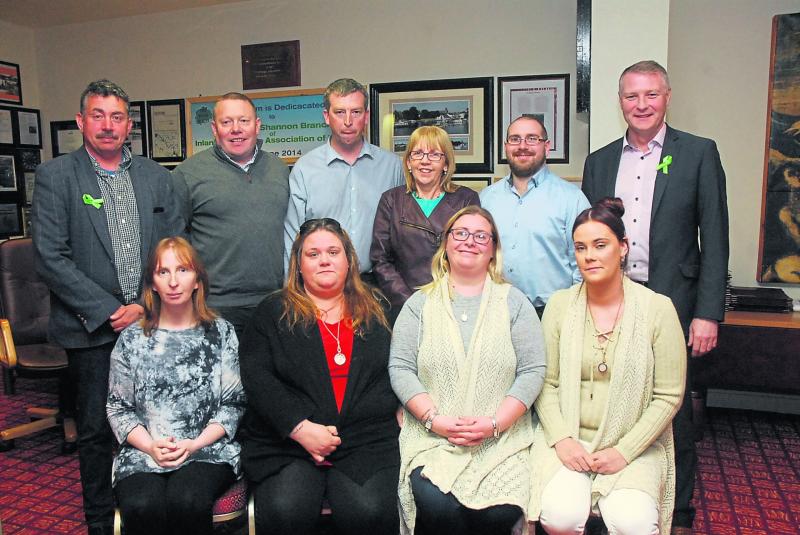 Pictured at a meeting of the 'Enough is Enough' campaign in The Bush Hotel, Carrick-on-Shannon last Friday night.

A public meeting took place on Friday, May 5 in The Bush Hotel, Carrick-on-Shannon outlining the 'Enough is Enough' campaign to people in Co Leitrim.

Mothers from Sligo whose children have specific health needs were in attendance and outlined the background to a campaign that is ongoing to redress what they said is a “huge imbalance in the health sector” in this region.

The main focus of the campaign is on child and adolescent mental health services, early intervention services, autism and broad based special needs services, and respite.

Such is the strength of their voice, they have gone from single voices lost on the wind to a powerful collective voice that has now managed to get them meetings with the HSE at managerial level to discuss the lack of services for children.

Going about their business with a positive and extremely determined approach, they have now also succeeded in scheduling a meeting with the Minister for Health, Simon Harris, in the coming weeks.

The campaigners were in Carrick-on-Shannon last Friday to tell their stories and to listen to the views and opinions of Leitrim parents and teachers and those who experience these difficulties first hand in their daily lives.

Taking turns to address the meeting, they stated that the stark reality is that the services are currently not there to even assess children with autism, intellectual disabilities, ADHD, those in need of speech and language therapy, those who are beginning to self harm, not to mind deal with the huge backlog that exists in the Child and Adolescent Mental Health Services (CAMHS).

This is a service that provides assessment and treatment for young people and their families who are experiencing mental health difficulties, but the reality on the ground is that the service is swamped and it is not providing the early intervention and respite that it should be.

The group is in the process of getting its message out to other families, those who are afraid to talk about their own child and maybe afraid of losing what supports and services they already have.

“We have individual problems but the problems are universal, we cannot access the public health service,” they said.

The group say there are currently 348 children on the CAMHS list in this region which includes Sligo, Leitrim, South Donegal, Cavan and Monaghan. They are under the care of a single consultant psychiatrist who has come out of retirement and is working 20 hours per week.

They say a letter has recently gone out to all GPs in the region from HSE management not to refer anyone else onto the CAMHS list as they are not accepting anyone else on it.

“There is nothing for children and parents are at breaking point. They are physically and mentally exhausted,” said one mother.

The group organised a protest march on March 3 last in difficult weather conditions which was very well supported and was given prominence by the local and national media, supported by local councillors and some of the local TDs. They make the point that all of the local TDs have now come on board in support of their aims.

On Friday, May 26 next they will be holding a further protest at Markievicz House in Sligo from 11.30am to 1pm. All the heads of the various department in the HSE will be meeting there at that time and the group is determined to make its presence felt, without being a loud protest, and show that it is a strong voice and it is not going to go away.

They have already met with senior officials in the HSE and all their questions, queries and concerns were listened to. Some of the people involved have agreed to meet once again with representatives of the group this Friday, May 12.

“This is going to be a very long process but we're not going anywhere until we see real progress,” they stated.
They have been told it is not a financial issue, the money is there for these services, but the budget hasn't been utilised.

“Our loved ones shouldn't be made suffer like that.”

Solas Respite Centre, specifically for children, was opened in Sligo in 2009 at a cost of €1.35 million but is now closed to children and is being used as an adult residential unit.

The HSE told them it is no longer suitable for children and they want it as a residential unit. They said there is no HIQA report on it and so it couldn't be used as it's not registered with HIQA. They were told that the HSE is currently tendering for a respite centre in Sligo but the building has to be under HIQA regulations.

“We were told it is going to be installed by September / October but we can't see it happening, this is going to take time,” they said.

They have been offered respite services in Carrickmacross, Co Monaghan which they described “as absolutely crazy.”

The option of private help is there but a lot of people don't have the money to go private. Parents are taking out high interest loans to get their children assessed and privately diagnosed in Dublin but that is costing them €60 to €70 per week.

Also, it was pointed out that if a parent chooses to go private, they automatically lose their place on the HSE public list because they are seen as being able to afford private treatment.

The meeting was told that CAMHS in Sligo has now switched to an answering machine and this is leading to huge frustration for parents even looking for a repeat prescription. When the mailbox is full, there is nowhere to even leave a message.

Cllr Seadhna Logan, who is working closely with the group, said there is also the issue that there is a huge turnover of staff in CAMHS in the last three years and every time staff changes take place people are back to square one.

The meeting heard from one teacher that new referrals of teenagers in Co Leitrim with emotional and behavioural difficulties are now being referred to Dublin instead of Sligo. They are willing to offer services on a weekly basis, but only in Dublin.

There is also a fear among the parents that the service for this region is going to be moved to Galway but they are determined to fight on.

The group has, to date, collected 11,000 signatures in Sligo which they intend to hand into Minister Harris to show its level of support.

Cllr Logan said they now need to document Leitrim experiences, for parents to speak out, so they can present as big a file as possible to the Minister when they meet with him.

“We are getting out to meetings, we are being listened to; they mightn't be doing anything, but they are listening,” the group stated.

Teachers present at the meeting on Friday all expressed the difficulties they face in their work. One teacher said schools get so little with regard to educational assessment, they're not getting the help they need to help the child.

“A teacher in an autism unit is not a psychiatrist or a speech and language therapist,” one teacher said.

“There's a false sense of security being put on parents that the school has the ability to deal with this. Teachers are not qualified to deal with that level of crisis,” the teacher noted.

While another teacher said that in reality “inclusion is an illusion.”

There is also the perception that a child, somehow, after five years in secondary school, is “cured” of autism.
“Oh I know,” said one of the mothers, “I know one child that was cured with a phone call.”

Deputy Martin Kenny said there is simply not enough resources to solve the problem and unless there are psychiatrists, psychologists, occupational therapists and speech and language therapists, there won't be a service.

One solution he put forward was that consultants from other areas of the country be used for assessments and diagnoses.

He too agreed that there is strength in numbers and said they now have a movement of parents who are “absolute experts on how the system works and are prepared to help and to make change happen.”

ourvoicetheirfuture is the name of their Facebook page. It is a private page for families only where they can ask whatever questions they might have and hopefully get some answers.