Carrick-on-Shannon is the fastest growing town (%) 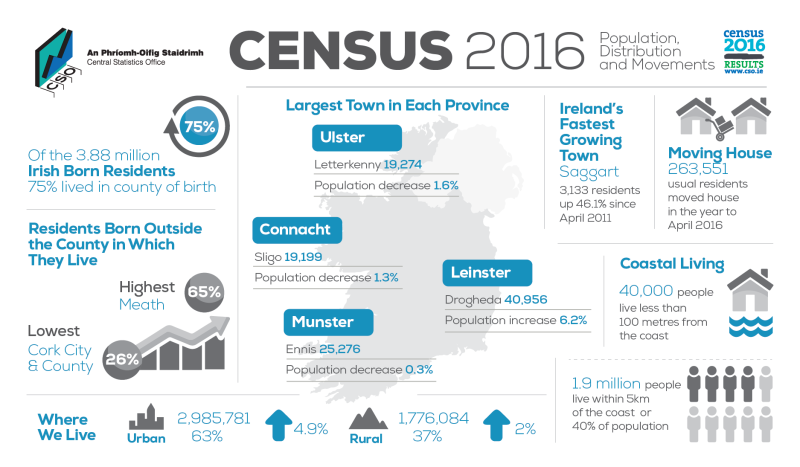 The Central Statistics Office has today published the second in the series of eleven thematic reports from Census 2016 – Profile 2: Population Distribution and Movements which sheds further light on how the population has changed over the past five years. Here's a look at Co Leitrim, followed by a national overview.

Carrick-on-Shannon, with 3,422 persons, was the largest town in the county. It was also the fastest growing town in percentage terms, experiencing 3.3% population growth between 2011 and 2016.

Nationally, Drogheda remained the largest town, with 40,956 residents, while Saggart was the fastest growing town, seeing its population increase by 46.1% between 2011 and 2016.

Only 88 of the 675 Leitrim households who moved in the year preceding the census bought their new home with a mortgage or loan, while 453 rented their accommodation.

In April 2016, 44% of the State’s total urban population lived in Dublin while 11% lived in Cork. Sligo was the county with the biggest change in the rate of urbanisation, increasing from 37% to 40% over the five years.
Forty-one towns had a population of 10,000 or more, with 27 in Leinster, nine in Munster, three in Connacht and two in the three Ulster counties. 62.7% of the population lived in urban areas in April 2016.

1.9 million people, or 40% of the population, were residing within 5km of the coast. Of this figure, 40,000 lived less than 100 metres from the nearest coastline.

County of birth and county of residence