Supporting people with dementia to continue to live at home 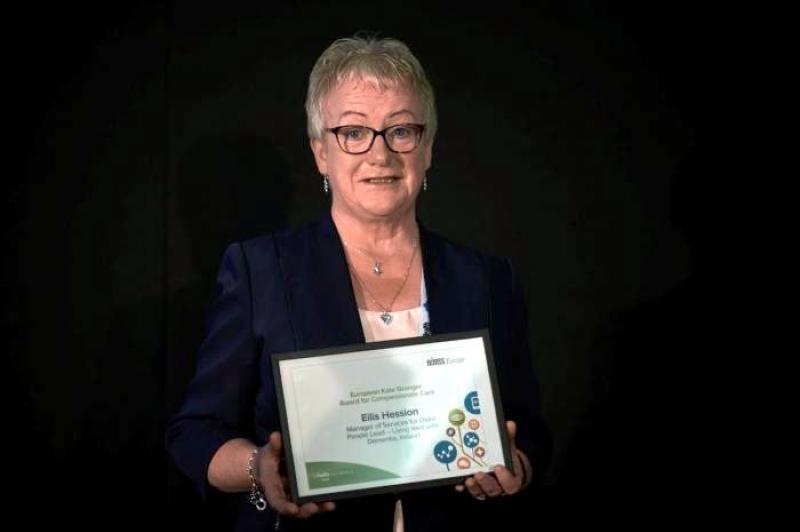 Eilis Hession, originally from Crucklahan, Drumreilly, Co. Leitrim, has been announced as the winner of the European Kate Granger Award for Compassionate Care 2017.

Eilis, who maintains very strong links to Leitrim with a house there and many of her family still living there, received the award at the eHealth Week Awards Plenary in Malta last Thursday, May 11. The Award recognises outstanding patient care by individuals currently engaged in the healthcare system.

She has worked as a public health nurse for many years delivering a quality and humane service to all her patients and their families. She leads the Living With Dementia programme in Stillorgan, Dublin, a three year community-based pilot project to support people with dementia to continue to live at home and be an active part of the community.

Her team comprises of patients, their primary carers and representative from community groups. The pilot will influence national policy on the care of people with dementia, improving the lives of tens of thousands of people throughout Ireland.

“I am a great admirer of Kate. In her darker days, while she was undergoing treatment for her illness, Kate still had the energy to try to change the way patients were being treated. She experienced that patients are not listened to and cared for as they deserve so she worked to transform that. I am very honoured to receive this important award,” Eilis said.

Eilis was the candidate that obtained the highest number of nominations for the European Kate Granger Awards 2017. The jury highlighted her “solid track record and accomplishment of compassionate care”.

The professionals that nominated Eilis for the award, said, “Through her passion, tenacity and leadership skills, Eilis secured three year funding for this project and her approach to patient care has been inspirational to the staff working with her.”

Eilis’ work demonstrates an ambitious and innovative way of delivering patient care. She is described as a “motivational leader with all the human, physical and clinical skills required to lead a whole community in creating a changed environment that is actively supporting and including people with dementia, enabling them to live their lives to the full in the community.”