Thank you from Carrick-on-Shannon Darkness Into Light 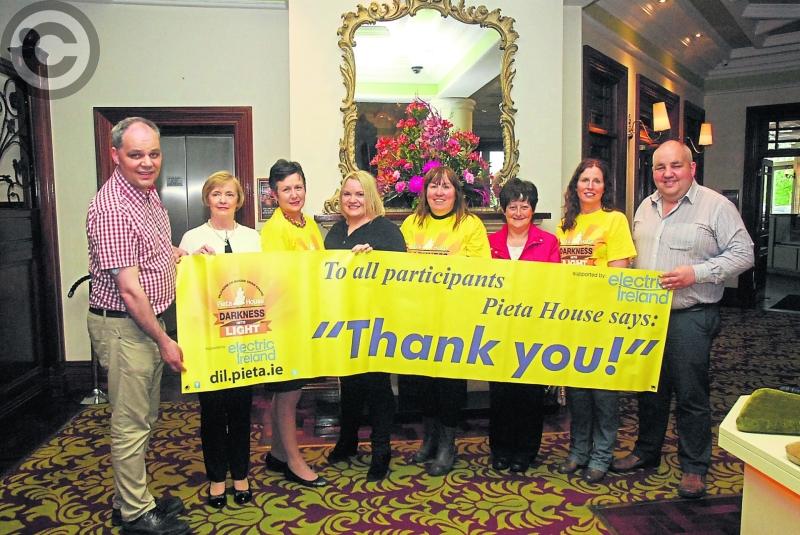 A huge thank you to each one of you, who in whatever way big or small, contributed to the success of the Pieta House event ‘Darkness Into Light’.
The committee would like to express a ‘Míle buíochas’, to all the volunteers, friends, stewards and sponsors who assisted them.
Firstly we would like to acknowledge our main sponsor Supervalu, Carrick-on-Shannon. Padraig Glancy and his team accommodated us with off-line registration and t-shirt pick-up. Aside from that Supervalu sponsored all the light refreshments on the night of the walk. A massive thank you to Glancy’s Bar, Cortober, who sponsored the water.
The involvement of The Magnet has to be appreciated. The support, kindness and assistance given by Finola, Teresa and Marie were second to none.
They offered t-shirt pick-up and off-line registration for a number of weeks. This premises provided a setting which facilitated communication and connectedness.
It was the first time for DIL Carrick to hold registration outside Carrick-on-Shannon. Once again thanks to Tríona and Gordon Murray for facilitating us in An Bóthar Rua, Elphin.
The co-operation of the Gardaí must be recognised also. Thanks to Supt. Kevin English and his team for their support and presence in the running of this event. Special thanks to Tom Dooner and his colleagues. Next we must thank our stewards.
Our committee member, Anne’s brother Paul and his colleagues from the council who joined with Padraig Hanly and Tommy Keenaghan’s Drumlion Diamonds, along with Ron, Michael, Pascal, Shane, Dessie, Eugene and Eugene and many more stewards who ensured that we had superb support and guidance for the participants.
Cllr. Enda Stenson’s presence has to be acknowledged, ensuring that everybody was in good spirits.
Inside the school we must acknowledge the ladies and lasses from the Drumlion Diamond group who along with Noelene and many other helpers, provided tea and coffee to all after earlier distributing t-shirts.
The promotion of the Darkness Into Light event was made possible by all the businesses in the Leitrim/North Roscommon region which allowed us to put up posters. Sincere thanks to Frances and Miceál Whitney for allowing us use of their premises for promotion and to Orla for enabling this to be possible also.
Also thanks to Brady Auctioneers for assisting in promoting of the event.
Many of the committee’s friends and family members assisted by putting up posters throughout our area, we are extremely grateful.
The photographs taken on the night were by Keith Nolan. These wonderful images can be viewed on DIL Carrick Facebook page or Keith's own page. Super job Keith.
The photograph of the bridge with the yellow lights was superbly taken by Gerry Faughnan. Thanks Gerry for sharing it with everybody. We are extremely grateful to the Chamber of Commerce, Carrick-on-Shannon for facilitating the change of lights to yellow. Thanks to all the people who assisted in registration both in Supervalu and on the night.
Thanks to AIB and Bank of Ireland, Carrick-on-Shannon, who helped by allowing donations to be collected on their premises.
Our gratitude also goes out to the Order of Malta who was present on the night of the event.
The entertainment on the night was provided by Eoin Lyons, who kept everybody upbeat with his choice of music. Míle buíochas Eoin.
Lastly we have to thanks Mr. Adrian Jackson and Mr. Paul Beirne for the use of The Community School. This location provided a wonderful setting for our event.
Finally to each one of you who took part and made the night a superb, emotional, and uplifting occasion. Thank you.