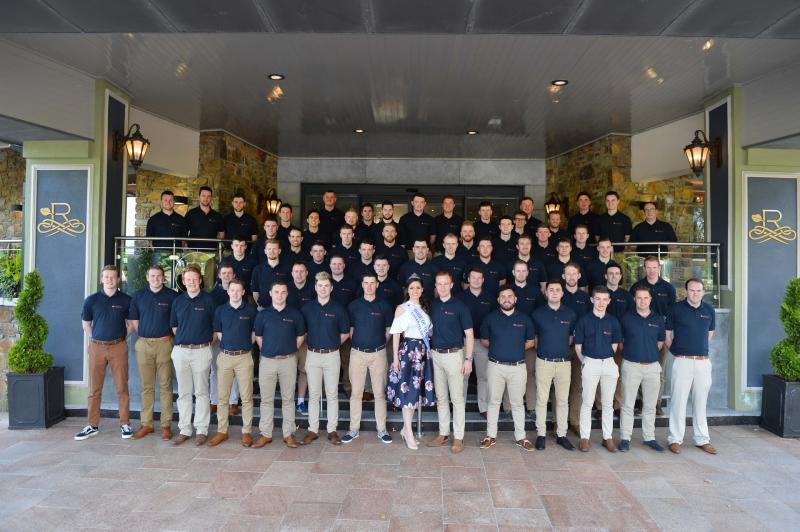 64 men from all over Ireland, including two from Leitrim. have made it through the famous Boot Camp Weekend in Kerry to take their places as Rose Escorts at this year’s Rose of Tralee International

Two young Leitrim men have got what it takes to be the perfect gentlemen and have been selected to be among the 64 Rose Escorts at this year’s Rose of Tralee International Festival from 16 to 22 August.

James Hazlett (23) from Drumkeerin and Niall Kiernan (28) from Carrigallen, who already came through an interview process at the Glen Royal Hotel in Maynooth in April, were put through their paces over the Bank Holiday Weekend at the annual Boot Camp along the Wild Atlantic Way in Kerry.

They had to pass a number of endurance tests and team-building exercises before they could graduate as fully-fledged Rose Escorts.
The Rose of Tralee International Festival’s Communications Manager, John Drummey, said: “The Rose Escorts spent three days in Kerry where they undertook a number of gruelling, yet fun, tasks to prepare them for the festival in August. It was not because the ladies love Milk Tray but because the lads prefer Roses. Around 200 men aged between 21 and 30 applied to become Rose Escorts at this year’s Rose of Tralee International Festival and following a detailed interview process, the final 64, the most ever, were selected to take part in a Boot Camp weekend in the Kingdom to help them cope with the demands of a busy week in Tralee.”

The lads had to carry out a range activities including a hike over Mount Brandon - Ireland’s second highest mountain - cliff diving, water-skiing, cycling, turf-footing, abseiling, kayaking, surfing, ironing and sewing in order to prove they will have the stamina to be a Rose Escort.