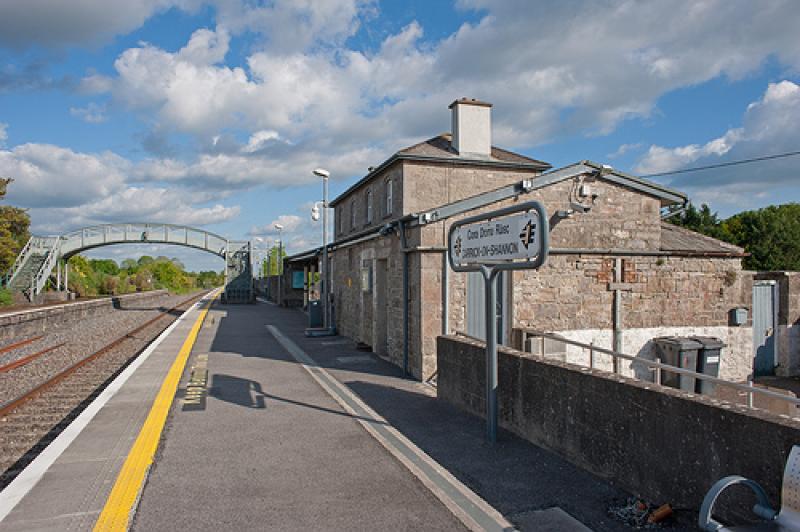 Carrick-on-Shannon councillors have unanimously backed a call for Iarnrod Éireann to provide weekend access to toilet facilities and shelter at Carrick-on-Shannon’s Railway Station.
Cllr Finola Armstrong-McGuire pointed out these essential facilities were not available over the busy weekend periods at the station.
Speaking at Monday’s Carrick Municipal District Meeting, Cllr Armstrong-McGuire noted that the office, waiting area and access to toilets at the station were closed from 5pm on Friday evening to Monday morning.
“There are many people using the train during this time and facilities we regard as basic, should be provided to all,” she pointed out.
“At the moment there is no shelter for those coming to collect people from the station, no place for people who are waiting for trains or arriving from other places, to take shelter during bad weather and no toilets available.
“Our traffic (on the train) is very heavy at weekends from mostly paying customers. I think this is a situation where Iarnrod Éireann will either have to open the doors to the waiting rooms and toilets or provide a better canopy outside this area and include a public or pay toilet there,” said the Fine Gael councillor.
She pointed out that the situation was exceptional in Carrick-on-Shannon as the station was located away from other shops and businesses.
“In places like Boyle, Longford or Sligo passengers or those waiting to collect them, are only a short distance from shops or bars where they can use facilities. That isn’t the case in Carrick-on-Shannon.
She put forward a proposal to contact Iarnrod Éireann with a view to getting better access to facilities at the station over the busy weekend periods.
Her motion was seconded by Cllr Sean McGowan who noted that current staffing at the station was very low.
“I think there are additional staff at Boyle and I see no reason why someone from Boyle could not come and open the waiting area and toilets in Carrick-on-Shannon on Saturday morning and close it that evening, for example.”
The proposal received unanimous support from the Carrick District councillors.