Leitrim student runner-up in Engineer of the Year Awards 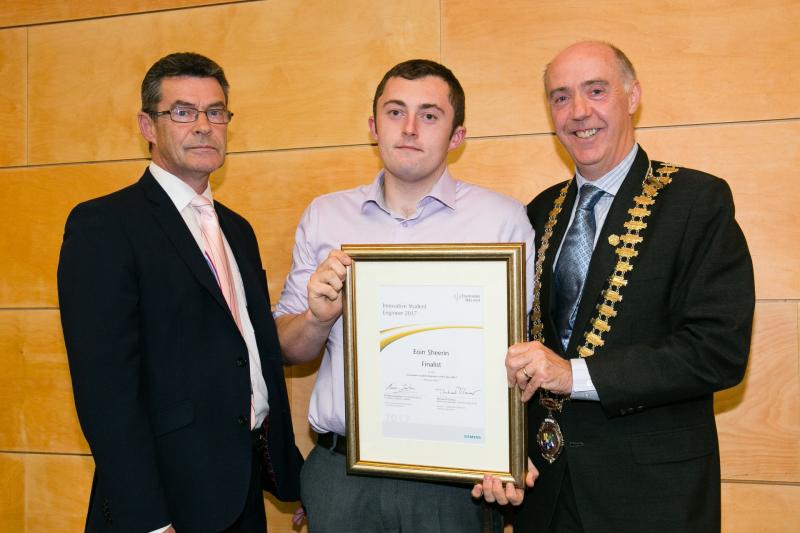 Eoin Sheerin, a student of Mechanical Engineering at IT Sligo and a native of Kinlough, Co. Leitrim has been announced as a runner-up in Engineers Ireland Innovative Student Engineer of the Year Award 2017, sponsored by Siemens.

Sheerin, along with his IT Sligo teammates, Barry Harkin, Julius Silkaitis and Darren Woods, were one of six teams shortlisted in the annual competition for their innovative project entry, the Standing Frame.

The Standing Frame allows individuals in a wheelchair to move from a sitting to a standing position. This innovative design has increased health benefits for the user and can assist with independent living.

The Engineers Ireland Innovative Student Engineer of the Year Award is an annual competition that focuses on showcasing innovation excellence amongst engineering third-level students across Ireland.

Six finalists were invited to present on their projects, which ranged from medical to logistic and environmental innovations, to a panel of judges at the competition final in Engineers Ireland’s headquarters in Ballsbridge, Dublin.

Aron Purser, a 3rd year student of Mechanical Engineering at IT Carlow, was the overall winner of the competition final for his entry, the Forklift ‘Bucket Bagger’,  which was designed to meet the requirements of the agricultural and construction sector having found that no such device was available on the market.

The ‘Bucket Bagger’ is an attachment which is placed on the front of a forklift and is used to fill bulk bags.  Previously, no bucket existed for forklifts, other than those for teleporters, which were unsuitable for use and also limited driver visibility during operation. Purser’s innovative product is currently being used by RDC Contracts in Kildare.