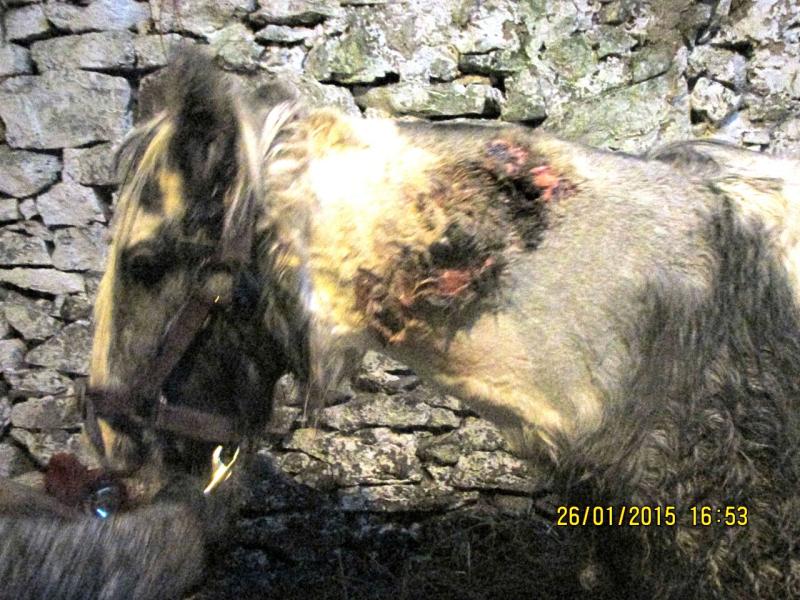 Some of the injuries suffered by the piebald pony.

A Sligo man has been ordered to pay €500 to an animal welfare charity after a piebald foal had to be brought to an animal sanctuary for emergency treatment for severely inflamed wounds on his neck.

Charlie Ward, with an address at 1 Elm Gardens, Ballytivnan, Co Sligo appeared before Judge Kilrane at Sligo District Court on Thursday, June 15 2017 where he admitted offences under sections 11 and 12 of the Animal Health and Welfare Act 2013.

The case related to a seven month old colt foal with serious neck injuries which was found in a disused carpark in Sligo town in January 2015.

ISPCA Inspector Karen Lyons responded to a call from a concerned member of the public at that time and found the young animal in a great deal of pain. Both sides of his neck had suffered massive puncture wounds which were badly infected and he was clearly in an extremely weakened state.

Inspector Lyons immediately organised for the foal, named Chance, to be taken into the care of the local equine sanctuary, Sathya Sai, where he received intensive veterinary treatment. The extensive wounds on both sides of the neck, which it is thought were over a week old, were only centimetres from the vertebrae in his neck and there was a risk of infection spreading to the spine, she said.

Although Chance was not micro-chipped further enquires by Garda Claire O’Brien revealed Mr Ward to be the owner and a Garda prosecution was initiated. Despite his horrific injuries, after some treatment Chance was in good spirits and his wounds quickly improved.

ISPCA Inspector Lyons said: “I would like to thank Garda Claire O’Brien for her work in taking this case and Sue Paling of Sathya Sai for coming to Chance’s aid. When I arrived on the scene he was just standing there lifeless on his own in the middle of the car park. He must have been in an awful lot of pain and didn’t have the energy to move”.

Members of the public should continue to report animal welfare concerns to the ISPCA by contacting the National Animal Cruelty Helpline on 1890 515 515 or report cruelty online in confidence on http://www.ispca.ie/cruelty_co mplaint.