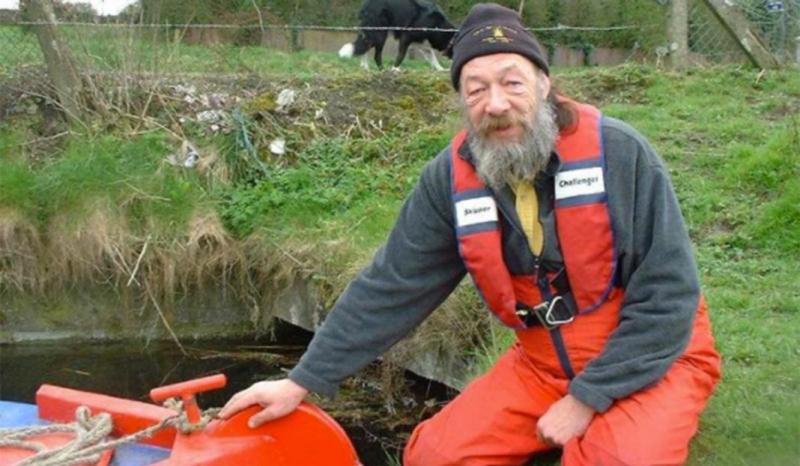 The Inland Waterways Association of Ireland has penned the following tribute to Dick Warner.

On the morning of Friday, June 16, 2017, a great man passed way. That man was Dick Warner and he possessed a special kind of greatness. Dick died suddenly while boating near Ballinasloe. While we are all shocked and saddened by Dick's passing, we are safe in the knowledge that when he was called home to port, Dick was engaged in what he himself described as '[his] full-blown love affair with the waterways'.

Dick Warner was always an explorer, a pioneer and an adventurer. Yet for a man who travelled widely from Botswana to Greenland and everywhere in between, Dick considered his 1991 journey along the Grand Canal and River Shannon from Dublin to Limerick aboard canal boat 45M as ‘one of the most profoundly important journeys of my life’.

The purpose of this journey was to once again take a fully laden canal boat from Dublin to Limerick, reminiscing the glory days of the inland waterways transport network, the reason that canals were built in the first place. So why was this journey so significant? And why, when the first series of ‘Waterways’ was broadcast did it have such a lasting impact?

As a child of the sixties, Dick Warner attended school during the same period that CIE ceased commercial boat traffic on the canals. Some years later Dick lived aboard a boat in Hazelhatch near Celbridge on the Grand Canal at a time when this was considered very unusual. Later, Dick settled near Donadea in Kildare, one of the most unspoilt and natural regions in the county.

Dick Warner was a prominent member of the Inland Waterways Association of Ireland (IWAI) and through membership he developed a passionate association with the Grand Canal in particular.

This may help to explain why the first series of ‘Waterways’ featured the Grand Canal. It told the tale of Grand Canal Company boat 45M as she travelled for one last time with a cargo of Guinness from Dublin to Limerick. 45M was the only original canal boat that could do this journey and she was also a boat with significant history. 45M sank at Parker Point on Lough Derg in Co Tipperary in 1946 with the loss of 3 of her 4 crew.

She was raised, purchased and faithfully restored to her original condition by Donnacha Kennedy, Carrick-on-Shannon, in 1975, so her choice for inclusion in the ground-breaking ‘Waterways’ series demonstrated Dick Warner’s commitment to regenerating the heritage of Ireland’s canals while at the same time highlighting their potential for future generations.

By the 1990s, Dick was already a well-known environmentalist, writer and broadcaster but the five series of 'Waterways' ensured international recognition for a humble and selfless champion of our canals and rivers. Dick held life membership of IWAI Kildare and he did so much to promote the use, without exploitation, of the Grand Canal in his beloved home county.

Dick was a regular and visible supporter of IWAI Kildare events and campaigns including the reopening of the canal harbour in Naas in 2002. Dick Warner did so much to put the potential of Ireland’s inland navigations in sharp focus and he did so in such an understated manner.

We have lost a truly great man in Dick Warner, a unique champion who continuously highlighted the beauty and magic of slow tourism on our navigations. He will be sadly missed.