The Cost Of Student Living 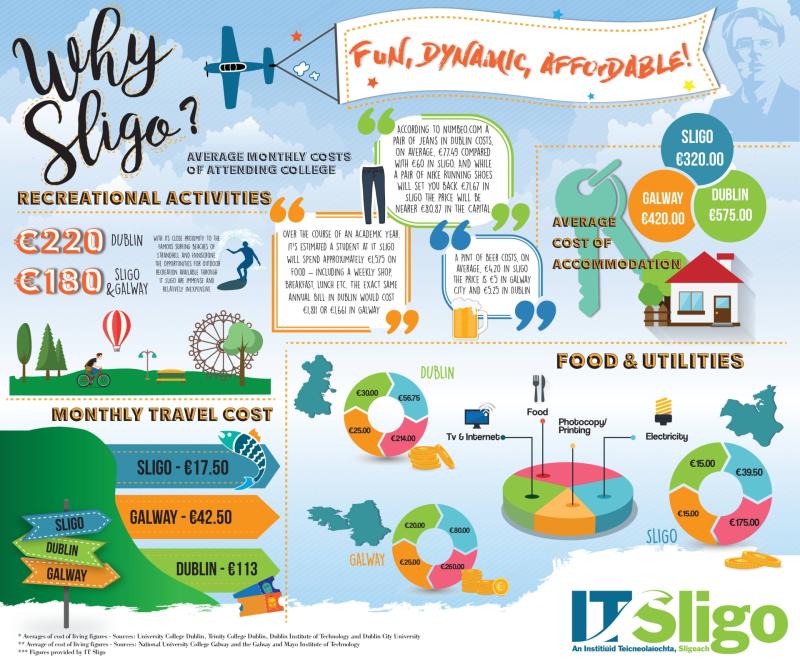 Students and their families can slash their education bills by thousands of euro a year by studying in Sligo.

A survey shows accommodation, food, transport and entertainment are vastly cheaper in the North West.

July means some post-exam freedom for those students who’ve just completed their Leaving Certificate examinations. But for their parents the calculators are out and it’s now they who must study. Because planning for third-level means knowing the likely costs involved.

Most third-level institutions will provide approximate living costs on their websites. And close analysis of these figures shows that the cost of attending a course in different Irish towns and cities varies wildly.

And the biggest variant? - accommodation costs.

While student accommodation in Sligo will cost, on average €320 per month, costs in cities such as Dublin and Galway, where there’s a severe shortage of supply in rental properties, are considerably higher.

Figures provided by University College Dublin (UCD) for example quote on-campus rents which start at €543 per month and run up to €1,008. They estimate that off-campus accommodation in Dublin will set the student back up to €600 per month.Dublin City University estimate the average cost of shared accommodation in Dublin for the academic year comes to €3,046 while Trinity College Dublin estimate it to be considerably higher at €5,500 just in one college year (that’s almost double the average cost in Sligo).

Individual apartments cater for between two to seven people. These purpose-built housing options include a laundrette and Wi-Fi and electricity charges are includedin the rental charge.

In addition, the IT Sligo Students Union operate a free bus service to assist students buy their weekly shop at discount supermarkets. The shuttle contributes to keeping the weekly shop costs low.

As in Dublin students in Galway compete with working professionals, families and tourists for basic rental properties. While Galway-Mayo Institute of Technology (GMIT) says monthly rents cost, on average, €400, figures provided by the National University of Ireland Galway (NUIG) put that figure at €440 each month – or €3,960 per year.

Accommodation, of course, is just one part of the annual student bill. Other less obvious costs eat away at the monthly budget.

Transport fees, for example, can mount.

While the estimated cost of travel in Sligo comes to €17.50 per month that figure is nearly seven times higher in the Capital.

University College Dublin advise students to purchase a monthly short hop ticket at a cost of €119. At DIT travel costs are quoted as €107.50.

Over the course of a nine-month academic year the variance become even more obvious – approximately €157.50 in Sligo compared with €1,071 in Dublin. It’s a major cost often overlooked when families sit down to choose a third-level institution.

In Galway, yearly costs for transport in the city for students amounts to between €360 and €400 according to the third-level institutions there.

Of course, recreation too is a major component to any student’s week. All work and no play is not an option!

A night out in the North Western hub is comparatively low compared with such costs in cities such as Galway and, of course, Dublin. While a pint of beer costs, on average, €4.20 in Sligo the price is €5 in Galway City and €5.25 in Dublin. With its close proximity to the famous surfing beaches of Strandhill and Enniscrone the opportunities for outdoor recreation available through IT Sligo are immense and relatively inexpensive.

Well, hidden cost differentials have to be considered when choosing a place to study.

Numbeo, the world’s biggest internet database on the cost of living, estimates that consumer prices in Sligo are 15 percent lower than in Dublin and 5.5 percent lower than Galway. Over the course of an academic year its estimated a student in IT Sligo will spend approximately €1,575 on food – including weekly shop, breakfast, lunch etc). The exact same annual bill in Dublin would cost €1,811 or €1,661 in Galway.

There’s even a significant difference in terms of the cost of clothes and shoes.

According to Numbeo.com a pair of jeans in Dublin costs, on average, €77.49 compared with €60 in Sligo. And while a pair of Nike Running shoes will set you back €71.67 in Sligo the price will be nearer €80.87 in the Capital.

When it comes to education it’s imperative that students can learn in a comfortable environment where they eat and sleep well.

At IT Sligo the burden of costs is lightened allowing students to thrive in a charming environment where the euro goes further.

When parents sit down at their kitchen tables with their calculators these are factors they should consider.