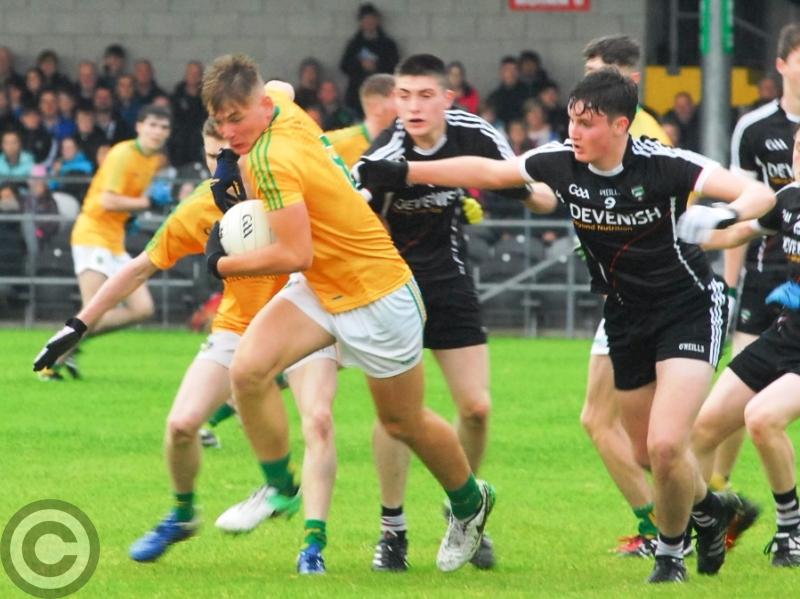 After a tentative first half, the game exploded into life in the second half with three goals inside the first four minutes as Leitrim twice responded to Sligo goals to keep the game and hopes of a Connacht Final appearance alive and strong.

But in the final ten minutes, Sligo took control of the contest, their strong running through the centre punching holes in the Leitrim defence to eventually open up a match winning lead.

Looking back on this game, Leitrim will rue missed chances as Martin McGowan’s side shot 11 wides, including two frees and one 50, to Sligo’s three, two shots dropped short to Sligo’s one and two shots saved that led to one wide and a point for Sligo from the resulting fifties.

The bare facts show a team that enjoyed a lot of possession and dominated territory but it also illustrates how the failure to capitalise on chances cost Leitrim very dear.

Sligo, who always looked threatening whenever they got the ball to their dangerous full-forward, made much more economic use of their chances and that, simply, was the winning and losing of this game.

Leitrim opened with an Oisin McLoughlin wide after 40 seconds but from the kickout, two Leitrim players collided in going for the ball, Sligo’s Barry Gorman played the ball through to Luke Towey who pointed.

Leitrim responded quickly when a free, taken at least 10 yards in front of where the offence occurred, saw the Green & Gold take advantage of indecision from the referee and Caleb Duffy swept over a fine point.

Ryan O’Rourke hit a free badly wide and Evan Harkin, pushing up to counter Sligo’s extra defender, dropped a shot short before a poor Sligo pass was intercepted, the ball quickly played into the corner for Duffy and the Allen Gaels man swept over a lovely point from the corner on seven minutes.

Sligo hit back with a very harsh free against Leitrim for touching the ball on the round, Red Og Murphy firing over from 40 yards.

Sligo’s Towey then got a harsh enough yellow for not stepping out of the way with Oisin McLoughlin putting a free wide. Sligo moved clear again when Conall Ryan gathered a free, spun and fired over on 11 minutes.

Leitrim had a great chance to go in front when a huge delivery was knocked down by Donnacha Devaney to a waiting Jordan Reynolds some five or six yards out but Sligo keeper Alan Davey made a spectacular save from close range at the expense of a fifty.

Sligo’s lead stretched to two points with a Red Og Murphy free after a mis-timed challenge from Sean Harkin that resulted in a yellow card but Leitrim hit back with a McLoughlin free after a foul on the raiding Ciaran Cullen after 24 minutes.

Sligo worked the ball down to Conall Ryan and back out to Barry Gorman for a monster 40 yard effort but Leitrim were dramatically and somewhat luckily back in front three minutes before the time.

Jordan Reynolds’ long range shot looked as if it would be another missed opportunity as it dropped short but Sligo keeper Alan Davey, in fielding the ball, stepped back over the line and the umpires quickly raised a green flag.

It was a huge boost for Leitrim but the score was almost wiped out seconds later when Conall Ryan left the Leitrim defence trailing but pulled his shot wide of the right hand post in a real let-off for Leitrim.

Red Og Murphy dropped a shot short while Leitrim, breaking after a Sligo attack that looked as if it should have resulted in a free, ended the half with a fine Caleb Duffy point to leave Leitrim 1-4 to 0-5 in front at the interval. 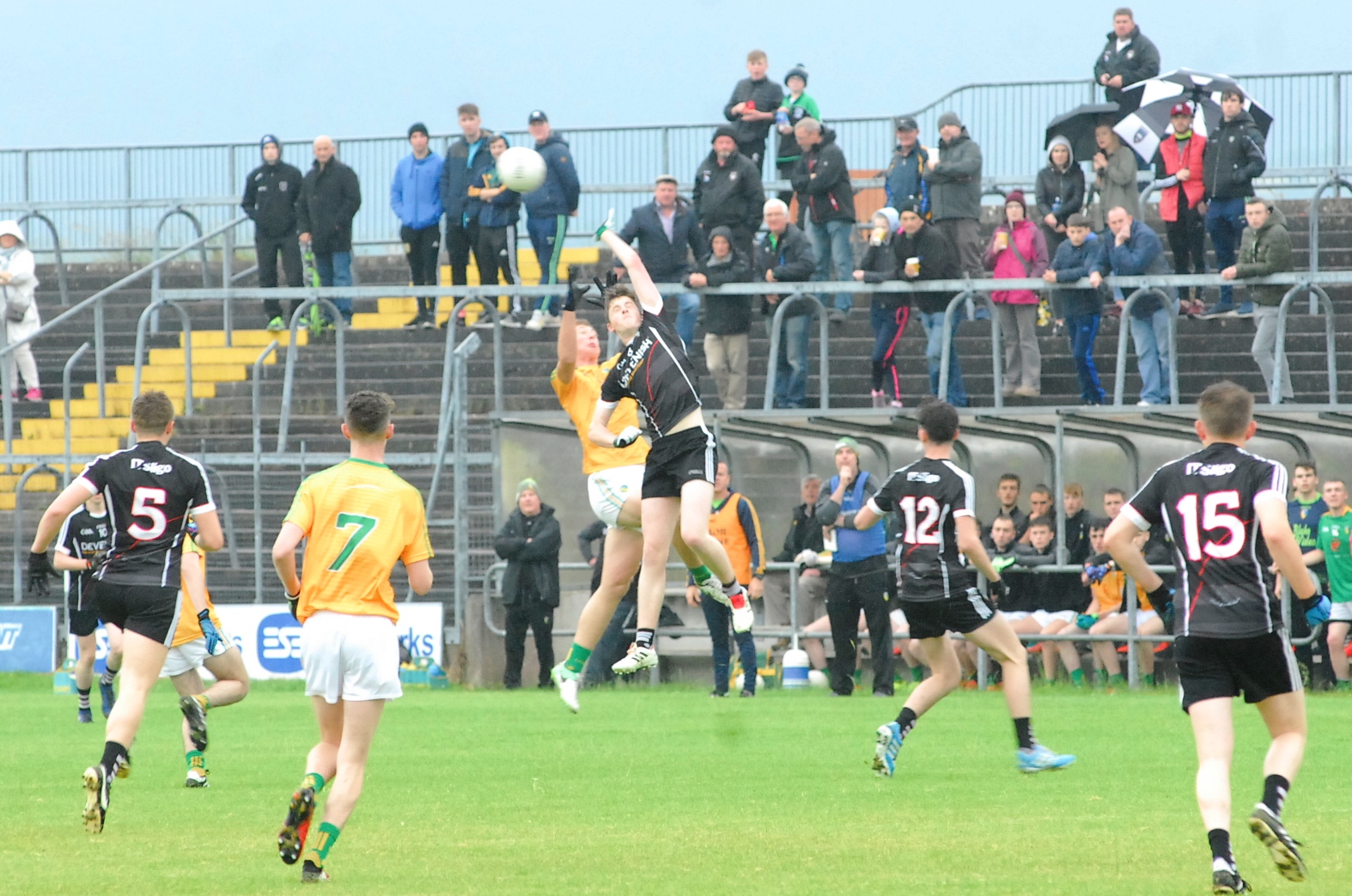 Leitrim suffered a blow at halftime when Ciaran Cullen, injured in the first half, was forced from the action with Mark Keegan coming on and it was Sligo who started with a bang, Barry Gorman feeding the ball to Roland Anderson who cut through the centre before find Red Og Murphy who finished expertly to the net.

Leitrim’s response was quick and while there was an element of good fortune in Sligo’s Karl McKenna overturning the ball when there seemed little danger, good Leitrim pressure forced a loose pass that was pounced on and quickly transferred to an unmarked Oisin McLoughlin right in front of the goal and he made no mistake with a close range finish.

If Leitrim responded quickly, Sligo’s response was instantaneous as, straight from the kickout, Barry Gorman broke the kickout to Sligo centre-back Evan Lavin who ran from his own half, breaking through a valiant effort from James Clancy to stop him, to finally produce a great finish from 20 yards out.

That left Sligo a point ahead again before Red Og Murphy earned a silly black card for a hand trip that might have cost his team. Leitrim broke through but Oisin McLoughlin dragged his shot well wide and it was a Riordan O’Rourke free that levelled the scores seven minutes in from a free.

Mark Diffley and Oisin McLoughlin had long range wides either side of a yellow card for O’Rourke before Aaron Hoare thumped a massive shot from 40 yards over the bar.

Sligo’s Josh Ellis made a good block on McLoughlin to concede a 50 but the fifty turned into a disaster as what Martin McGowan later revealed was a planned move backfired when O’Rourke played the ball back towards McLoughlin but it was off-target and intercepted, Sligo going up the field for Conall Ryan to score.

Ryan then had a shot that went across the goal but Sligo worked hard to keep it in play and found Roland Anderson who fired across the bar.

Good work from sub Colm Kiernan, who replaced Donnacha Devaney before halftime, set up Evan Harkin for a good point but the game took another major twist with a third Sligo goal, another great catch from Gorman releasing a quick ball to Ryan.

With the Leitrim team pressing high upfield, it meant there was lots of room for Sligo to exploit and exploit it they did with Ryan feeding sub Ryan Walsh and he fired low to the net past a helpless Eoin Gallagher.

It looked like a body blow but two minutes later, Leitrim hit back again, working the ball to Oisin McLoughlin and his low shot somehow squirmed under keeper Davey and into the net for a goal that had Leitrim’s supporters going wild.

Leitrim had three chances to go in front but Ruairi Sheridan, Aaron Hoare and James Clancy all had shots from distance that never troubled the umpires as they went wide while Sligo’s Michael Cahill shot wide.

But Sligo seemed to find a new gear in the final 10 minutes when Evan Lavin breaking through two or three tackles again to fire over the lead point on 21 minutes and that led to three points over the next four minutes as the home team took control.

Luke Towey ran through from midfield to score, Walsh just curled in a shot after Sligo counter-attacked when Mark Diffley was penalised for steps and then Man of the Match Conall Ryan just curled a long range shot inside the near post.

Ryan would put the exclamation point on the victory with an injury time point, a fabulous solo effort, as Sligo’s defence held out against Leitrim’s attempts to engineer any sort of a comeback. 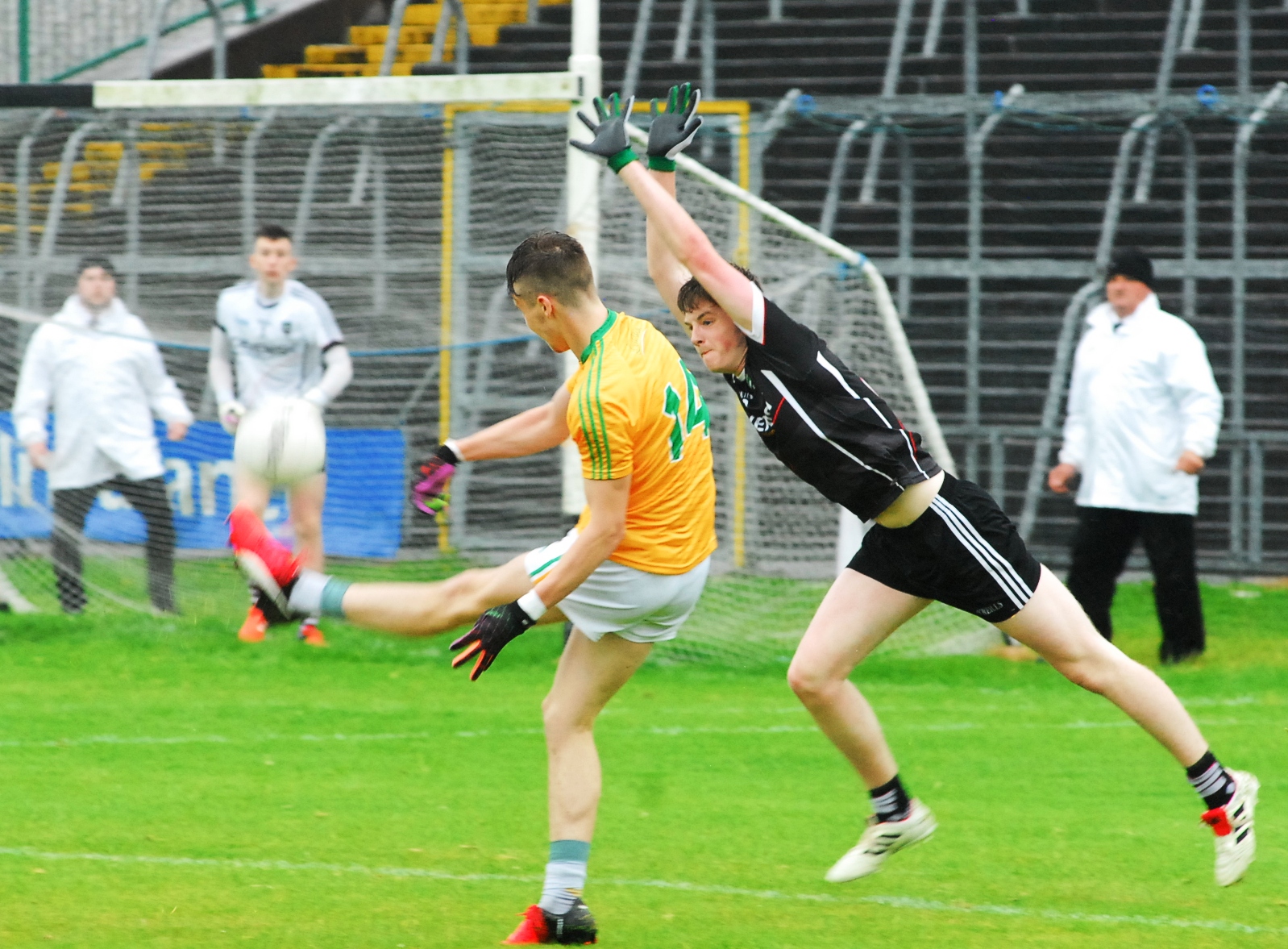 Caleb Duffy shoots for one of his three first half points against Sligo. Photo by Willie Donnellan