Average age of Leitrim people is getting older 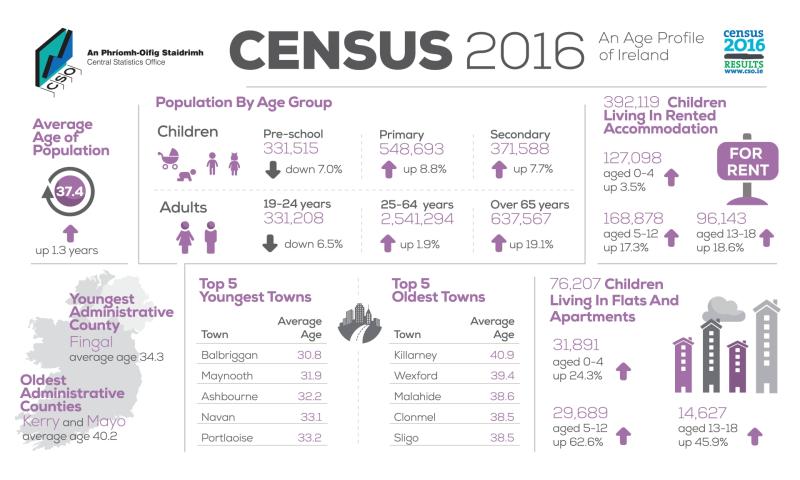 The latest results from Census 2016.

Leitrim's population getting older and has risen to 39.8 years.
The CSO  has, this morning, published Profile 3 - An Age Profile of Ireland, the latest in the series of thematic reports from Census 2016
The average age of Leitrim’s population in April 2016 was 39.8 years, an increase of 1.4 years since 2011. Those living in urban areas were on average 3.1 years younger than those in rural areas. Nationally, the average age increased by 1.3 years to 37.4 years, while the average age in rural areas was 2.4 years higher than that in urban areas.
Age Groups
Profile 3 provides data on the population by a range of age groups, i.e. pre-school children (aged 0-4), primary school aged children (5-12), secondary school age (13-18), young adults (19-24), adults (25- 64) and older people (65 years and over).
Leitrim, in common with the State overall, recorded declines in the numbers in the pre-school and young adult groups, with the percentage decline in both age groups being higher than those seen nationally. The county also showed a 2.5% fall in the number of adults, compared to a 1.9% increase at national level. The percentage increases in the other age groups were below those seen nationally.
Age Dependency
Age dependency is a measure of the extent to which the young (aged 0-14) and older (age 65 and over) populations are dependent on the population of working age people, defined as those aged 15 to 64 years. The dependency rate in Leitrim was 62.6%, i.e. the number of young and older people together were equal to 62.6% of the total number of working age people. This was significantly above the national rate of 52.7%.