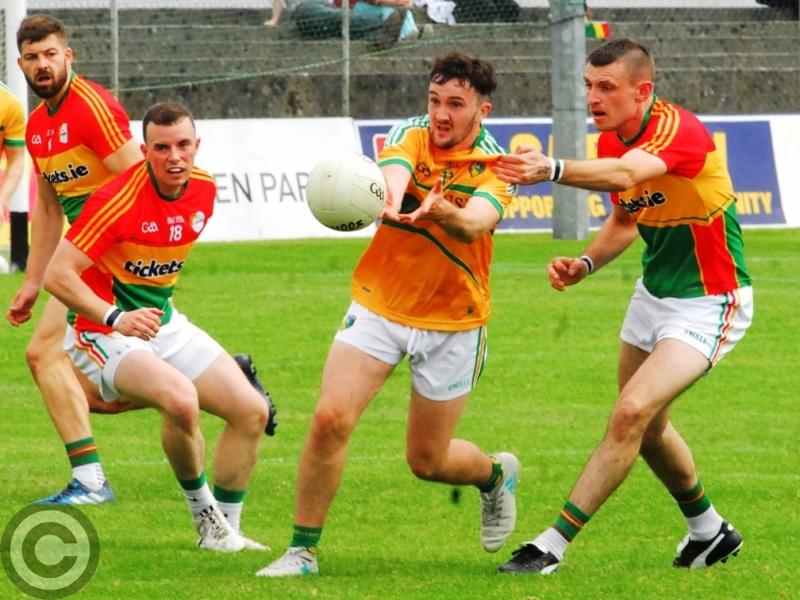 A tremendous first half from Leitrim counted for nought as Carlow over-powered the Green & Gold in the second half to run out seven point winners in Saturday’s All-Ireland Football Championship Qualifier in Netwatch Cullen Park.

Playing some of their best championship football for some years, Leitrim turned in a tremendous first half display to lead the home side by two points at the break and seemingly in a good position to rattle a clearly unsettled Carlow.

But the second half saw a different Carlow as the home team turned their focus from the long ball to Paul Broderick to repeatedly punching gaping holes in the Leitrim rearguard as the energy and drive of the Leitrim first half performance disappeared in the face of the Carlow onslaught.

Paul Broderick’s goal came after Leitrim turned the ball over eight minutes into the second half and Sean Murphy launched a surging 60 yard run that left Leitrim players trailing, a deft off-load and clinical finish from Broderick giving Brendan Flynn no chance.

The second goal didn’t come until eight minutes from time, another breakaway leading to Ciaran Moran blasting a rocket to the roof of the Leitrim net.

It was rough on a Leitrim team whose clever and patient build-up play had defied the odds in the first half, twice opening up four point leads and giving the large home support plenty of think about.

But once the physical power of the Carlow men began to bear fruit, Leitrim’s challenge mysteriously faded away as Carlow repeatedly turned over the ball and won the midfield battle to take control of possession, the Green & Gold going 20 minutes without a score after the restart.

Carlow did serve some notice of their impending dominance in the first half as they created three goal chances, Brendan Flynn making a great save from one effort while the loss of Dean McGovern to a black card just before halftime was another huge blow.

The game ended with a red card for both teams, Brendan Gallagher and Carlow’s Chris Crowley, while Gary Reynolds was very lucky to escape harsher sanction for a high challenge that led to a row that saw Gallagher and Crowley punished. 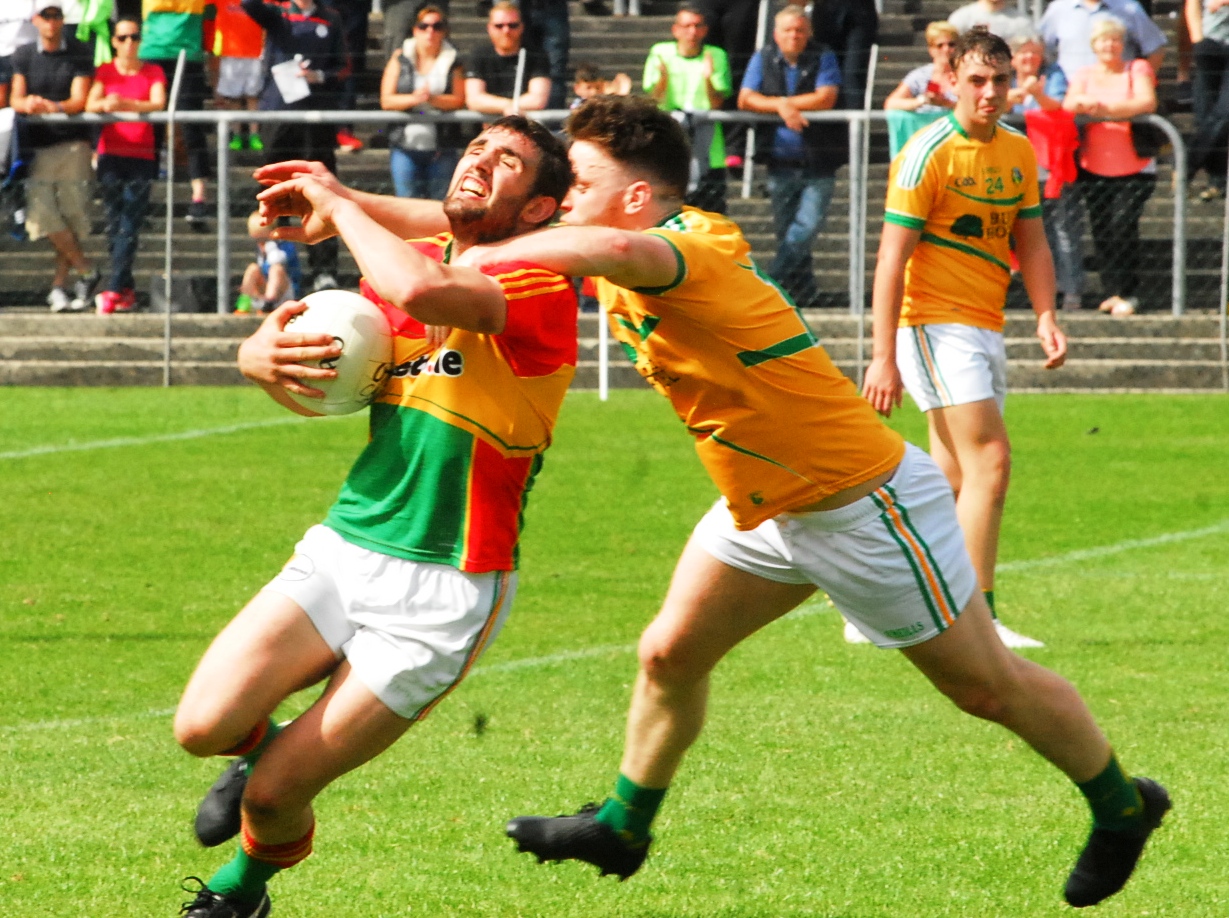 Carlow opened the scoring with a great Paul Broderick shot after just 48 seconds but it was Leitrim who were setting the agenda, a disciplined and patient gameplan seeing them switch the ball from side to side before Brendan Gallagher’s burst led to Conor Cullen curling the ball over the bar.

Leitrim got a bit of luck for their next score, a poor Gary Reynolds shot misjudged by a Carlow defender as the ball bounced over his head, Ryan O’Rourke gathering and running in to score.

Dean McGovern looked as if he was about to breach Carlow’s last line of defence with a powerful run, only to be taken down by Gary Kelly, Ronan Kennedy tapping over the free on seven minutes.

Carlow gave notice of what they are capable of when John Murphy blasted wide across the Leitrim goal with a couple of players in support but it was Leitrim who continued to impress, a long ball up to Ryan O’Rourke worked back out the field where O’Rourke got back on the end of the move to fire the ball over the bar.

Brendan Gallagher saw a great free curl just inside the posts on 12 minutes as Leitrim now led by four points and while a quick move involving Sean Murphy and Ciaran Mahon ended with Gary Kelly firing over, Leitrim hit back with a Ronan Kennedy free for an off-the-ball foul on 17 minutes.

Carlow made a couple of adjustments and started to run the ball more and two Broderick frees was answered by another O’Rourke point after a great catch on 23 minutes.

Carlow should have goaled after Sean Gannon cut through the Leitrim rearguard, his off-load to Paul Broderick seemingly set for a goal but Brendan Flynn made a wonderful save at the expense of a fifty that Broderick sent wide.

Broderick hit two points in quick succession, one from a free, but a huge effort from Brendan Gallagher steadied Leitrim.

The Green & Gold suffered a major blow when Dean McGovern collided with a Carlow player off the ball down in the home side’s right hand corner, the black card hard to argue with as Conor Cullen had escaped similar sanction minutes earlier. 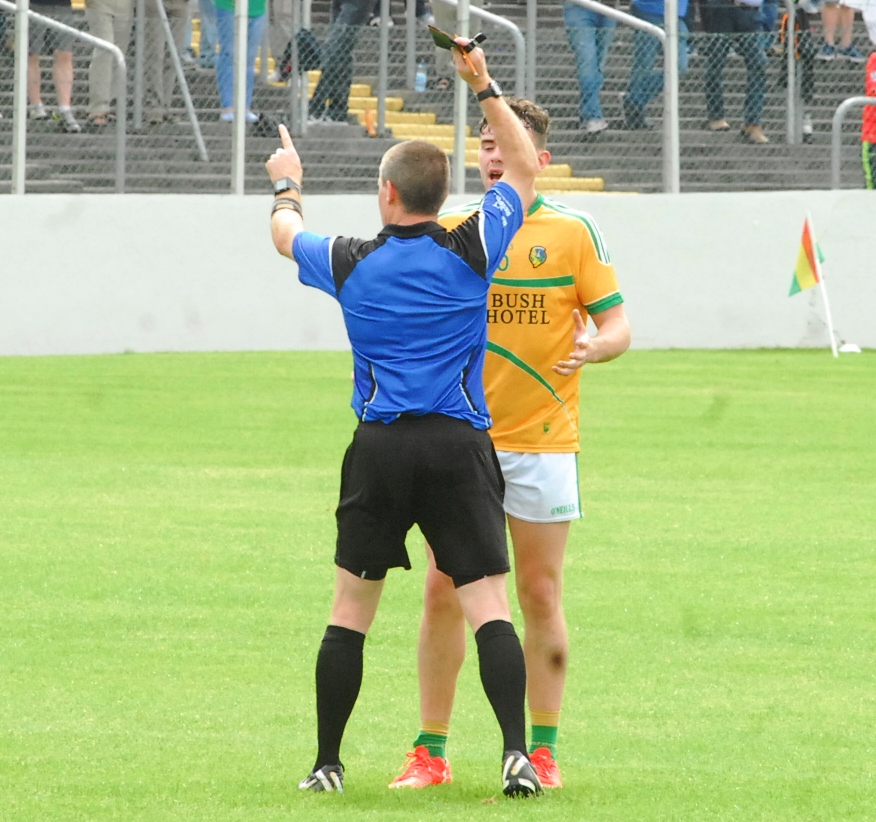 Ronan Kennedy fired over a fifty-yard free but Carlow finished the half with a point from Eoghan Ruth in injury time, a score that should have been a goal as he galloped clear with nobody near him.

That left Leitrim with a 0-9 to 0-7 halftime lead and seemingly in a good position but despite a missed Broderick free, it was Carlow who upped the ante, Darragh Foley and Broderick both firing over good points from play.

Eight minutes into the half came the moment of truth when Shane Moran lost the ball on the Carlow fifty, a quick turnover leading to a blistering Sean Murphy run. A hand-pass off to Broderick looked a bad move but the Carlow man managed to find a couple of inches between Flynn and the post to find the net.

That lifted Carlow and the crowd and although we went six minutes without a score, Carlow extended the lead with points from Gannon and Darragh Foley (free).

Leitrim got their first score of the second half when Ryan O’Rourke scored a brilliant effort from the corner and sub Darragh Rooney did the same two minutes later to cut the gap to just three points.

Leitrim looked as if they might rise a gallop but it was Carlow who hit the afterburners, Kieran Nolan, Ciaran Moran and Shane Clarke all scoring points over the next four minutes and they applied the coup de grace when they broke again, Broderick turning provider for Ciaran Moran and a powerful finish to the roof of the net.

The game ended in a welter of argy-bargy with Gary Reynolds yellow carded for a high challenge that looked very high, sparking off a row that saw Brendan Gallagher and Carlow’s Chris Crowley red carded.

There were also yellows for Conor Cullen and Sean Murphy for off the ball clashes and Leitrim finished with two late consolation scores for Ronan Kennedy and Keith Beirne, both from frees, as the season came to a close for the Leitrim Senior team. 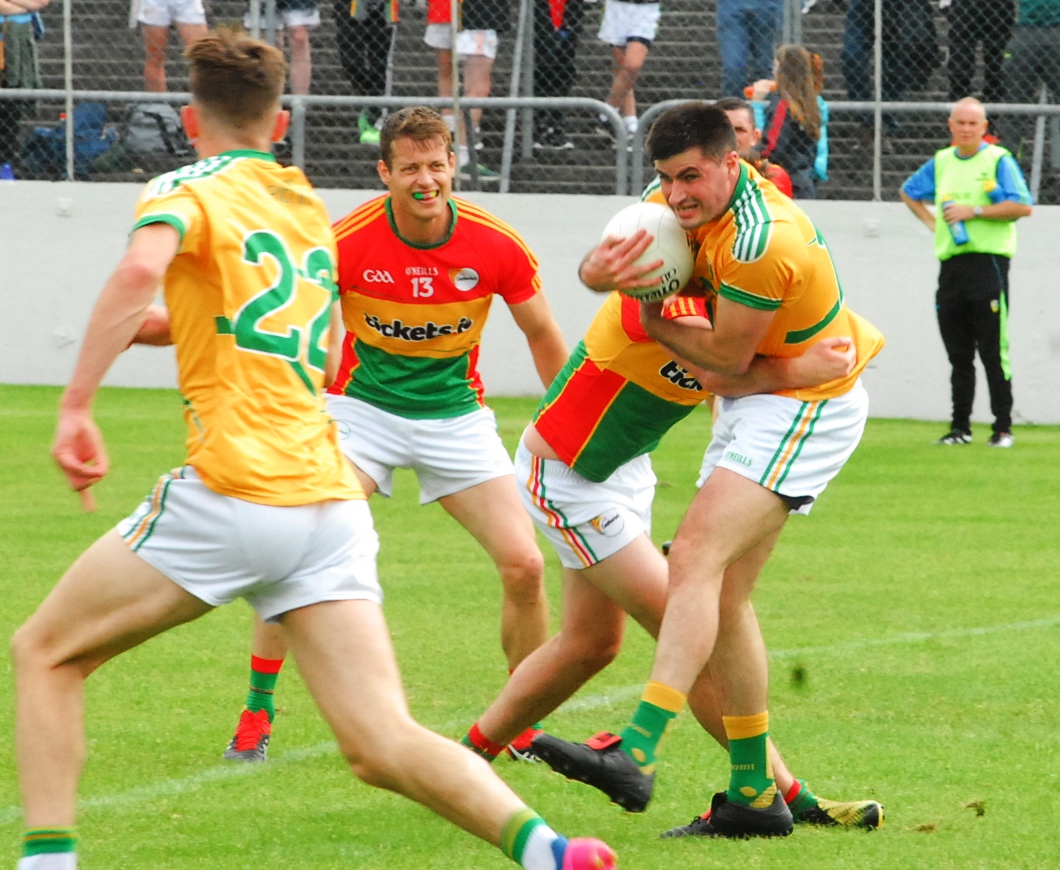 Ronan Gallagher is stopped in his tracks by a Carlow defender. Photo by Willie Donnellan

The Leitrim team who were defeated by Carlow in Netwatch Cullen Park. Photo by Willie Donnellan