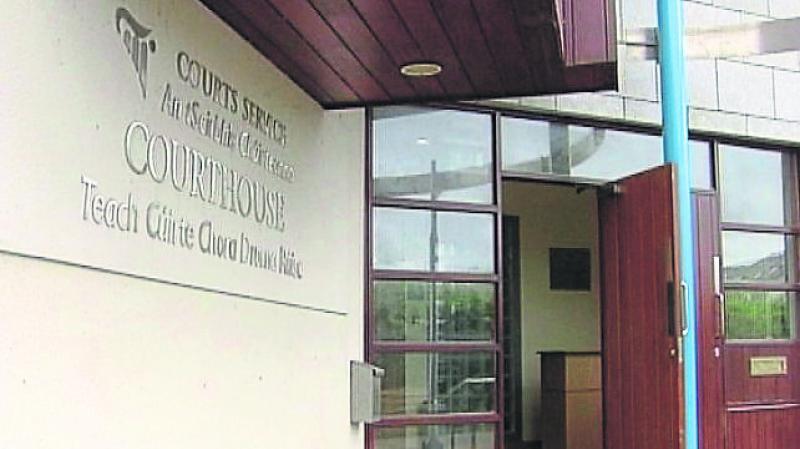 A case of “vicious” assault carried out “without provocation” concluded last week with Judge Kevin P Kilrane sentencing a Ballyconnell man to four months in prison.

Prior to sentencing at Carrick-on-Shannon District Court Judge Kilrane remarked “All sins can be forgiven up to a point if the truth is told. The truth was not told by the defendant. If the truth was admitted the consequences would not be as severe.”

Laurence Corcoran, Kildallen, Ballyconnell, Co Cavan was convicted of assaulting taxi driver Timmy McManus on June 13, 2016 at Main St, Carrick-on-Shannon and sentenced to four months in prison.
Prior to the case commencing all witnesses, other than the defendant, were asked to wait outside the courtroom until they were called.

Giving evidence the injured party, Timmy McManus, said he received a call to collect Jim Butler from Flynn’s Bar and parked outside the premises on the night of June 12/13, 2016.

He recalled that when he arrived he beeped the horn and shortly afterwards he observed a male “Hit my car a kick and hit the wing mirror.”

Mr McManus said he rolled down his window and called out to the person who had struck his vehicle saying “Do you know what you’re after doing,” to which a reply came back, “What the f**k about it’.”

Mr McManus said he then received a punch in the face, through the open window with blood splattering across the dashboard of the car and the passenger's shirt. Mr McManus recalled he was struck a further four or five times.

Mr McManus’ passenger “Tried to reach over and stop the gentleman from hitting me,” said Mr McManus who added Mr Butler then phoned the Gardai and called for assistance from the bouncers at Dunne's Bar.

The bouncers held the man who was adjudged to have struck Mr McManus with Mr McManus describing him as being tall, with dark hair and noted that he was “very strong.”

Mr McManus was brought by Shane Fitzpatrick, Bar Manager of Dunne's, into Dunne's Bar where Mr Fitzpatrick administered first aid and took photos of the injuries.

Mr McManus recalled after driving for three miles he began to get very sick and after contacting NowDoc was advised to get an ambulance. He was taken to Sligo hospital where he received five stitches adding that he is still on anti-depressants and has given up taxi driving.

Mr McManus said he was “100% certain” it was the defendant who assaulted him adding he, “Never saw the man before in my life” and said there was no reason he knew of for the assault.

Under cross-examination from defending solicitor John McNulty, Mr McManus said he was unable to recall what the defendant was wearing on the night in question with Mr McNulty replying, “You couldn’t say because you didn’t see him.”

The second prosecution witness, Jim Butler, said he was in the car when he heard a thump and observed a number of punches being thrown at Mr McManus through the open window.

Mr Butler said he “tried to restrain the arm coming in through the open window.”

He recalled punches were “Thrown repeatedly very, very fast into the face of Mr McManus. Blood came from above Mr McManus’ eye.”

Mr Butler said he observed the defendant and another male walk down Bridge St, then return past Flynn’s pub, past Mulvey’s and then walk back towards Flynn’s pub. Mr Butler observed him pull an empty beer barrel down and it rolled into a car.

Further evidence was given by three more witnesses: Gerry Shortt, a taxi driver who was parked at the taxi rank at the clock and witnessed the assault; Shane Fitzpatrick (Bar Manager of Dunne's) and Charles McTernan (Dunne's security).

Giving evidence Gda James Martin said he received a report of an assault. “I arrived at 1.06am and met with Timmy McManus who was injured over the right eye. Charlie McTernan was restraining a young male along with Des Hudson, another member of the security staff.”

Describing the behaviour of the defendant Gda Martin said Mr Corcoran was “aggressive, agitated and intoxicated.”

The case was adjourned for one week as one of the witnesses, Des Hudson, was unavailable to attend. When the hearing resumed Mr Hudson gave evidence which was in line with that already detailed.

The penultimate witness in the case was Mr Corcoran’s friend Jason Burns who said the two were in Carrick as part of a staff night out from the Slieve Russell Hotel.

When asked by Insp Harrington if he recalled the defendant pulling down the beer barrel, Mr Burns replied, “Yes, Laurence put his hand out and pulled a barrel down.”

Mr Burns added, “The barrel happened but he didn’t assault anyone.”

Addressing Mr Burns, Insp Harrington stated, “Your recollection is flawed and I think I am being very generous when I say flawed. I put it to you your evidence is economical with the truth.”

Judge Kilrane informed Mr Burns, “The assault wasn’t on Bridge St,” adding, “You were in full contact with Mr Corcoran about the case.” In reply Mr Burns said, “Not until recently.”

The final witness was the defendant, Mr Corcoran, who told the Court after spending some time in Dunne's Bar he and Jason Burns decided it was time to go to 360 nightclub.

“We got to The Bush Hotel and there seemed to be less and less people about. We decided what to do next and turned around.

“Around 20 or 30 yards around the corner we heard a commotion behind us. All of a sudden I was grabbed from behind.”

Under cross-examination from Insp Harrington, the defendant said he had a good recollection of the events of the night and wasn’t drunk adding, “I’m not a big fan of alcohol.”

When asked why he had discussed the case with Mr Burns, Mr Corcoran said it was because Mr Burns is not on Facebook and they don't see each other very often.

He added, “This has been over a year. You wouldn’t believe the turmoil I’ve gone through.
“This allegation that has been made against me... I was on anti-depressants, I’ve dropped out of college. I felt like I needed to speak to someone.”

When asked about the incident with the beer barrel Mr Corcoran said, “I don’t remember pulling and grabbing one down. It’s a long street, we weren’t the only ones there. He could have seen a barrel fall.”

When it was put to Mr Corcoran that his friend, Mr Burns, had seen him pull a barrel down he replied, “I don’t accept that.”

Having heard the evidence Judge Kilrane said, “There is overwhelming evidence,” that the defendant “Viciously and without provocation assaulted an innocent man causing him serious injuries.”

Imposing a conviction Judge Kilrane said, “All sins can be forgiven up to a point if the truth is told. The truth was not told by the defendant.

“If the truth was admitted the consequences would not be as severe. He may feel he has an obligation to continue that line. If he continues that, there is only one place he is going today and that is not home.”

The case was then adjourned for a five minute period to allow the defendant review his version of events.

When the case resumed Mr McNulty said, “The consensus seems to be nobody knows what happened.”

Mr Burns was then recalled to the witness box with Judge Kilrane telling him, “If you want to save him from prison, tell the truth.”

Mr Burns stated, “I don’t have a perfect memory of that night but I am genuinely convinced Laurence did not commit assault.”

Concluding the case Judge Kilrane said he did not need a probation report as the matter was “absolutely denied.”

He imposed a conviction and four month prison sentence.

Recognisances were fixed at €100 own bond and €3,000 independent surety of which €1,000 must be lodged and the surety must be approved.

The money was lodged immediately with the surety approved as the defendant’s mother, Catherine Corcoran.