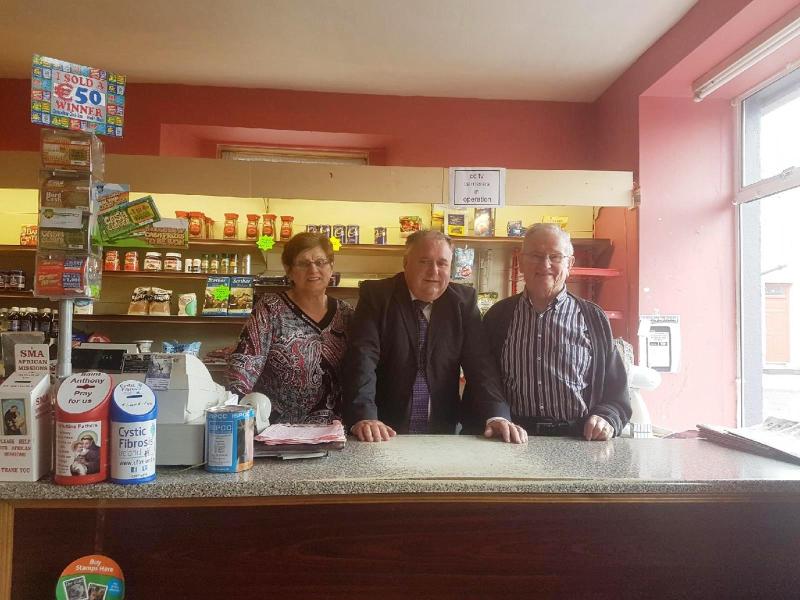 Deputy Eugene Murphy pictured with Colm and Una O’Donnell on the last day of trading in the landmark O’Donnell's shop in Keadue.

Eugene Murphy TD has moved to allay fears over the collection of Social Welfare payments in the Keadue area following the closure this week of the landmark O’Donnell’s shop.

O’Donnell’s shop in Keadue closed its doors to the public on Friday after over 50 years of dedicated service in the North Roscommon village.

"O’Donnell’s shop has been a feature of the area since 1964 when Colm O’Donnell and his wife, Una, established it and I want to pay tribute to them both for their many years of dedicated service and excellent customer service.

"It really was a landmark establishment in the area and it was a day tinged with sadness and emotion when I called in on Friday there were so many well-wishers and customers calling," said the Fianna Fáil TD for Roscommon / Galway.

"O’Donnell’s shop was also a postal agency for An Post, where people collected their social welfare payments and there was some confusion initially as to where payments could now be collected.

"I have been in touch with An Post who has since clarified that when a postal agency closes, the Department of Social Welfare has to nominate single location where payments can be transferred to and in this case Drumshanbo was selected.

"However people collecting their State Pensions and other Social Welfare payments will have to go to Drumshanbo initially but they will then have the option to choose a postal outlet nearer to them such as Ballyfarnon, Arigna or Knockvicar which will obviously suit people living in the Keadue area better so they can rest assured that they will have that option,” concluded Deputy Murphy.