Co Leitrim has lowest construction levels in the country 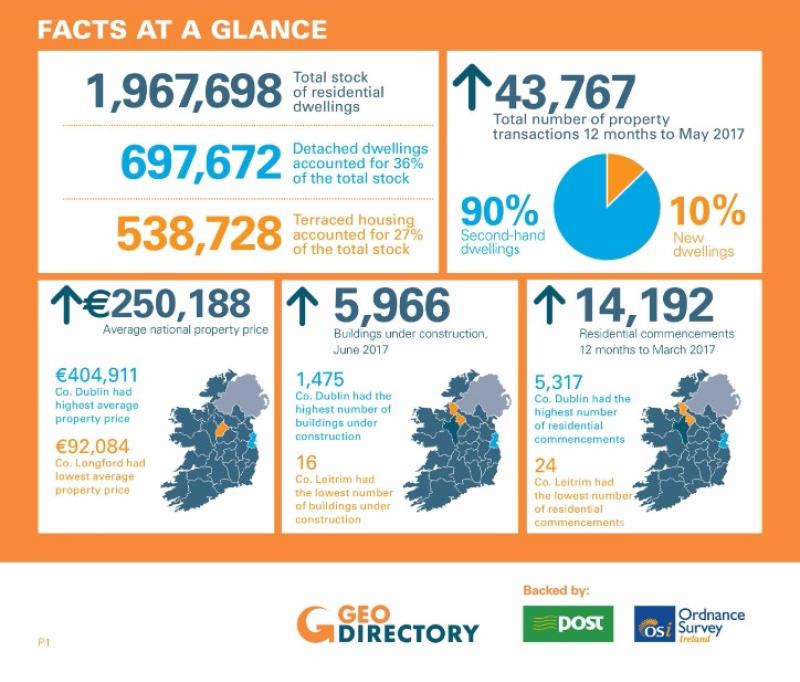 Residential construction has increased by 36% year-on-year, according to the latest edition of GeoView published today by GeoDirectory, but construction in Co Leitrim remains the lowest in the country.

The database found that there was a total of 1,967,698 residential dwellings across the country in June 2017. By cross referencing data from the 2016 CSO Census of Population, the Department of Housing, Planning, Community and Local Government and the GeoDirectory Database, the GeoView report offers new, unique insights into the residential housing density, turnover and construction levels and the housing shortage across the country.

One of the reasons for the sharp increase in construction is the low number of vacant properties in the market. In the GeoView report, a property is considered vacant if it falls into one of the following groups:

GeoDirectory report an estimated vacant stock of 96,243 (4.9% of the total stock) address points or dwellings in June 2017, while the 2016 Census reported a vacant stock of 183,312 (12.3%) dwellings, as of April 2016. The 2016 Census enumerators, in identifying vacant dwellings, were instructed to look for signs that the dwelling was not occupied e.g. no furniture, no cars outside, junk mail accumulating or overgrown garden, and to find out from neighbours whether it was vacant or not. It was not sufficient to classify a dwelling as vacant after one or two visits.

Longford, where the property market has been one of the poorest performers recorded the lowest average price of €92,084. The average property price in Leitrim was €98,241 an increase of €11,900 since the June 2016.