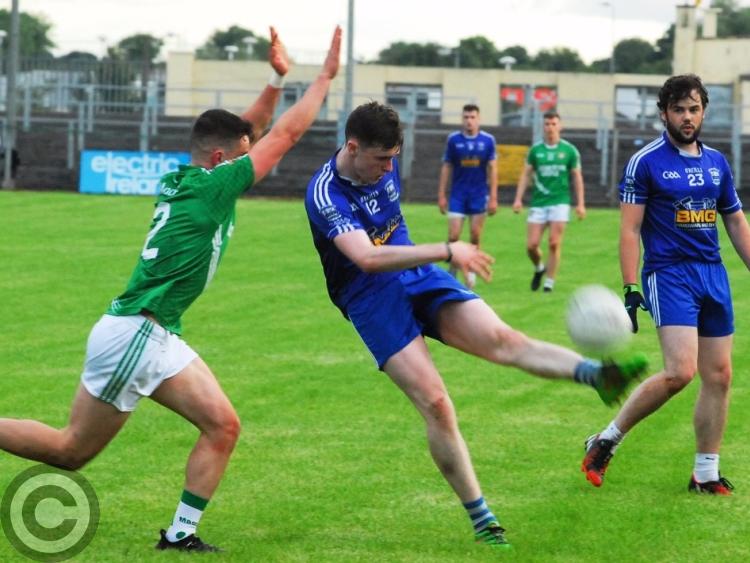 Mohill and Melvin Gaels are favoured to add to their wins in round three. Photo by Willie Donnellan

The games are coming thick and fast as we hit the midway point of the group stages in the Connacht Gold Senior and Fox Monumentals Intermediate Championships with some exciting games set for this weekend.

We take a look at a few of the games, put our heads on the chopping block by making predictions after calling ten of last weekend’s 12 games correctly. Of course, we got two wrong with Eslin piping Ballinaglera and Drumreilly shocking Dromahair.

This is a contest with a lot of history and not just recent history as we have the meeting of the 2016 Senior and Intermediate Champions. Ballinamore are unbeaten and seem to be hitting form while the champions seem intent on making it safely through the Group stages when they hope to have their injured stars back and making an impact.

It makes it difficult for Aughawillan to build momentum, work on team tactics with so many players missing but if there is a team that can inspire dread in the opposition ranks, it is Aughawillan. They will need to be at their best here against Sean O’Heslin’s.

Having lost to Aughawillan just a few weeks ago in the League, Ballinamore have the chance to send out a big message here if they can secure a big game win over their neighbours. O’Heslin’s have been firmly in their shadow in recent years but their form and huge resources mean they should come through here after a right battle. 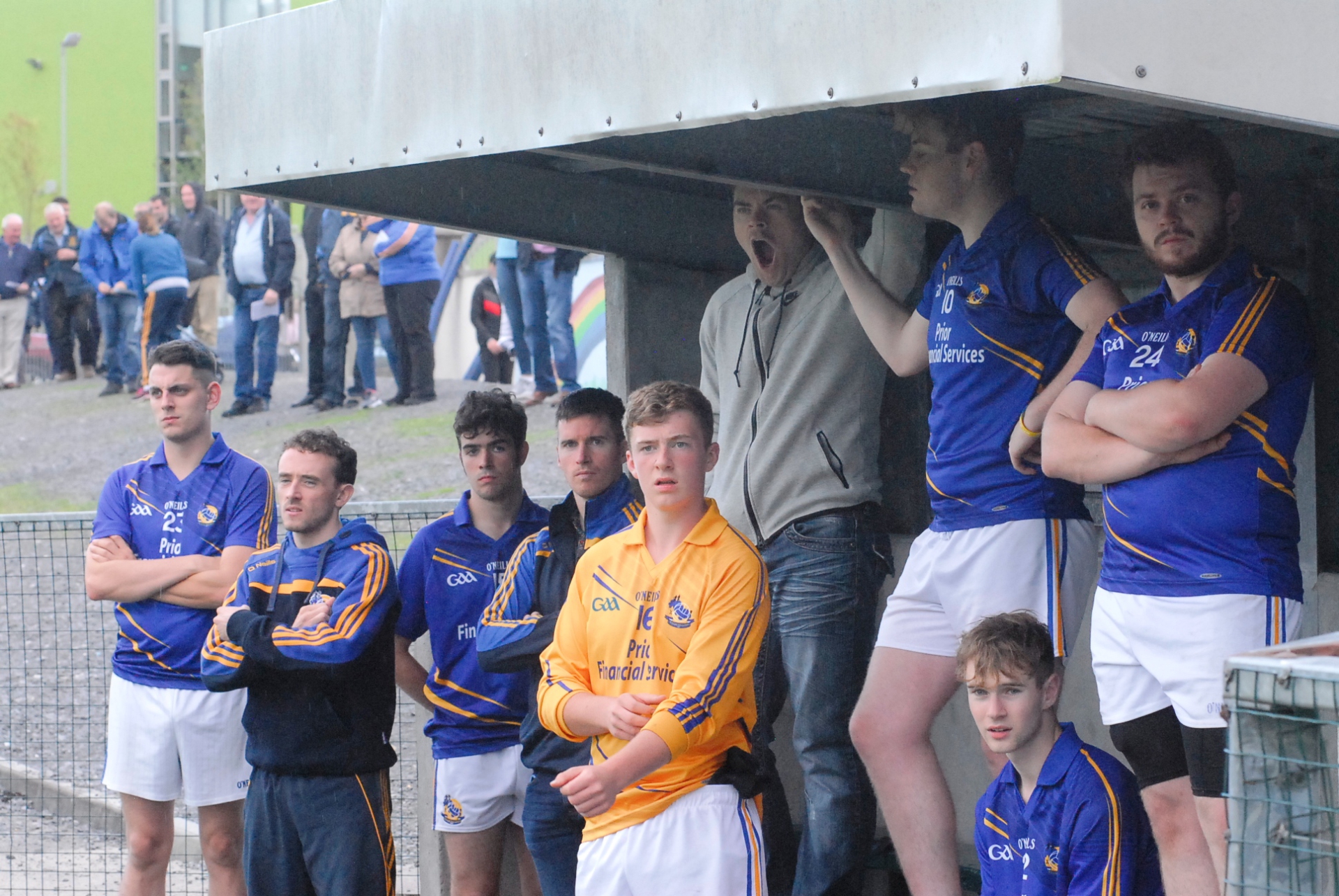 Fresh off a 19 point loss to Ballinamore, Gortletteragh must feel they broke ten mirrors as their neighbours and championship front-runners Mohill are up next. Cathal McCrann may be missing after suffering a heavy blow to the head last Friday and Gortletteragh dearly need his leadership as the fire and brimstone that they usually bring to the championship has been missing for Gortletteragh.

Mohill are simply flying and a hard but clear cut victory over Melvin Gaels will increase their confidence. A win here means qualification for the quarter-finals with two games to spare so don’t expect any lessening in Mohill’s momentum - a clear cut win for the League champions.

Mohill’s second string put up another battling display against Carrigallen but again fell short last weekend. They have the luxury of playing after their Senior team which should help with the pool of available players and they will test Kiltubrid here.

However, Kiltubrid can bounce back after their loss to Cloone with a clear cut win here. They have to cut down on giving away frees but they showed enough in the loss to Cloone to suggest that they can make the quarter-finals. A win here will go a long way. 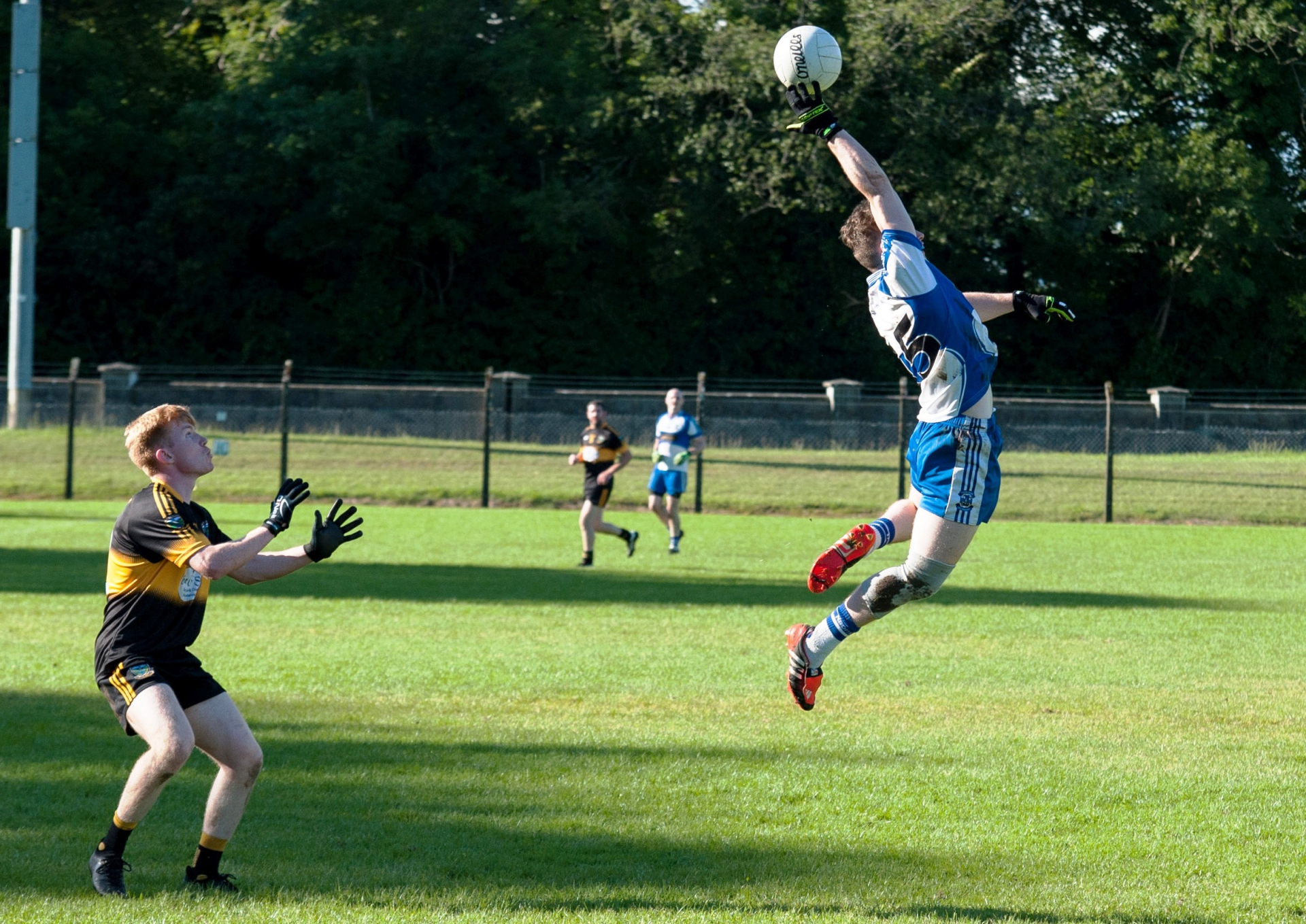 Reach for it! A great shot of an airborne Gary O'Daly in action for St. Mary's against Bornacoola. Photo by Declan Gaffney

Dromahair need a win badly but they look unlikely to get it against a St. Mary’s team going about their business quietly and efficiently. The Carrick men have two big wins behind them and a third should see them safely into the Quarter-Finals.

Their confidence is building all the time and having players like Ray Mulvey and Conor McWeeney coming off the bench is a huge asset. Confidence appears to be an issue in Dromahair who have put up some battling displays but always seem to fall away when the pressure comes on.

Hard to know if that is a confidence issue or a fitness one. Dromahair can catch Mary’s if the Carrick men are complacent but that is hard to see happening. St. Mary’s to win.

Allen Gaels have been something of a hard luck story in this year’s championship as they have led both Ballinamore and Aughawillan at halftime only for the walls to fall off in the second half.

Fitness and playing resources may be an issue but you can’t fault their spirit, it has made them far more competitive than their League record would suggest. Unfortunately for them, they come up against a team with a well-oiled defensive system and some outstanding forwards in Melvin Gaels.

The Kinlough men had a blip with the loss to Mohill last weekend but it is only that, a blip. Expect normal service to resume next Saturday in Pairc Sean Mac Diarmada.

This could be the game of the weekend - a derby meeting between two teams with vastly different resources. Fenagh St. Caillin’s are only now beginning to reap the rewards of strong youth development and look on the cusp of big things in the years to come while Eslin are struggling desperately with numbers and only had one sub on the line last Sunday against Ballinaglera.

But what Eslin have is the Beirne brothers and stopping them is the task set for Fenagh this weekend. Fenagh may have a couple of players capable of fielding with Tomas Beirne in Jack Gilheaney and Donal Wrynn but the physical power of the Eslin man is hard to match.

But as hard as Eslin with battle, it is hard to see them keeping out a forward line with Ryan O’Rourke pulling the strings. This game will be a more difficult test than they might expect but Fenagh should come through. 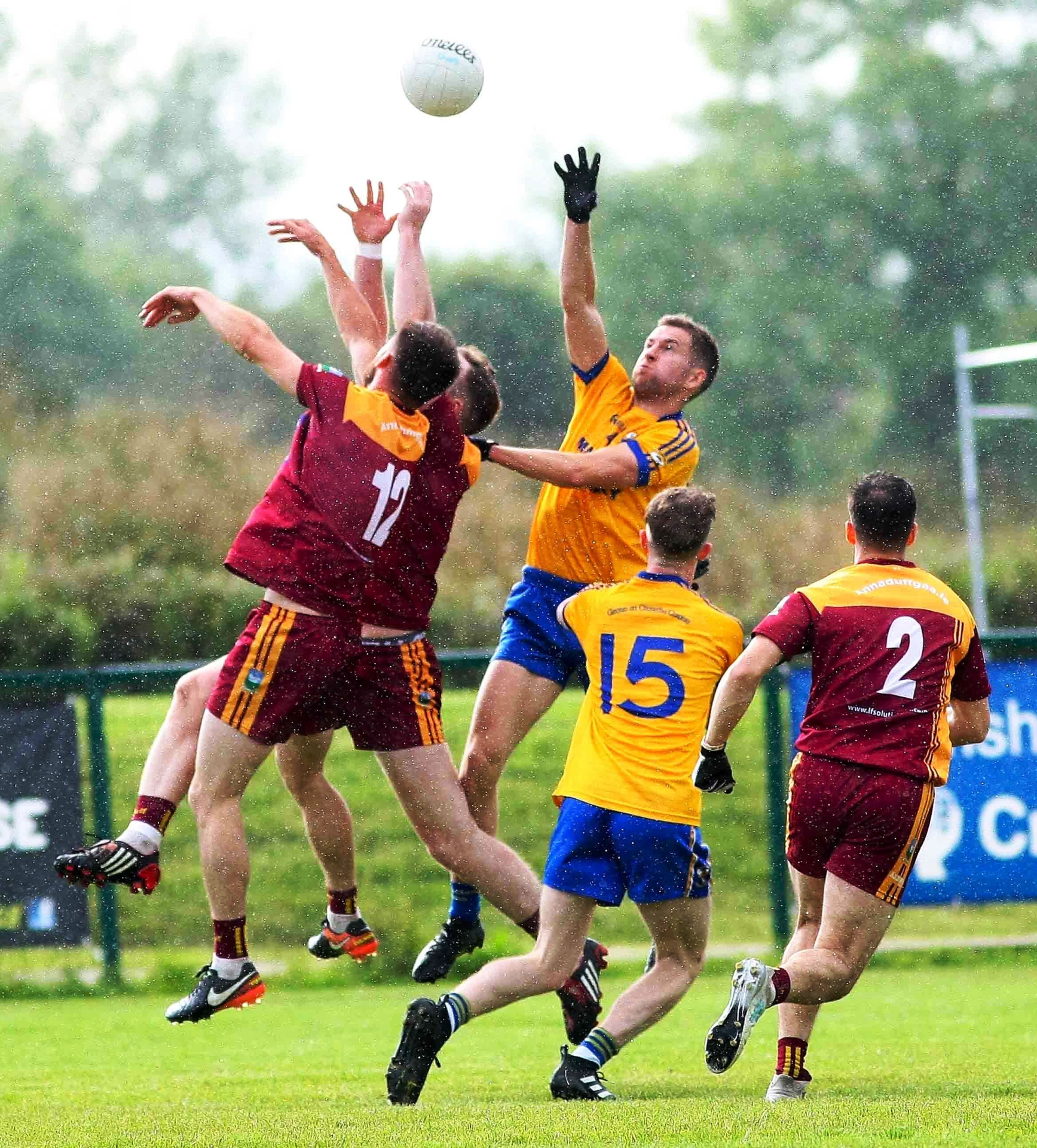 Aerial action from the meeting of Glencar/Manorhamilton and Annaduff in Shane McGettigan Park. Photo by James Molloy

Annaduff and Drumreilly both had important wins last weekend and a win here would push them well into contention for the quarter-final places. The teams, however, are a contrast with Drumreilly relying heavily on storied veterans while a new generation is beginning to make a mark for Annaduff.

Sean McNabola has been impressive so far and given their strength in depth and strong display against Glencar/Manorhamilton, a downright unlucky loss for the division 2 side, you have to fancy them to emerge with the victory here. County star Conor Gaffney will cause them plenty of headaches but Annaduff's strength in depth should see them through here.

No more than Dromahair, Bornacoola’s performances have not been reflected in results against Annaduff and St. Mary’s but the Bors need a big performance against a Glencar/Manorhamilton yet to fire on all cylinders.

The north Leitrim men were lucky to emerge with a win over Annaduff, an Annaduff side that Bornacoola matched for long periods in the first game so that should give the underdogs some hope. Yet it is hard to see anything other than a win for Glencar/Manor given their greater resources and talent on the field.

We might call this “The Mountain Derby” as neighbours Aughnasheelin and Ballinaglera meet in a vital game for both teams. Unbeaten Aughnasheelin improved drastically from their first game when overcoming Drumkeerin but shipped a couple of heavy knocks to Philip Dolan, Keith and Gavin Sammon - they won’t want to be without any of those players.

Ballinaglera kicked a hell of a lot of wides against Eslin and seemed to be struggling with themselves as much as the opposition last Sunday. They will need a major improvement but it is hard to see them making too much headway against one of the favourites for the title. 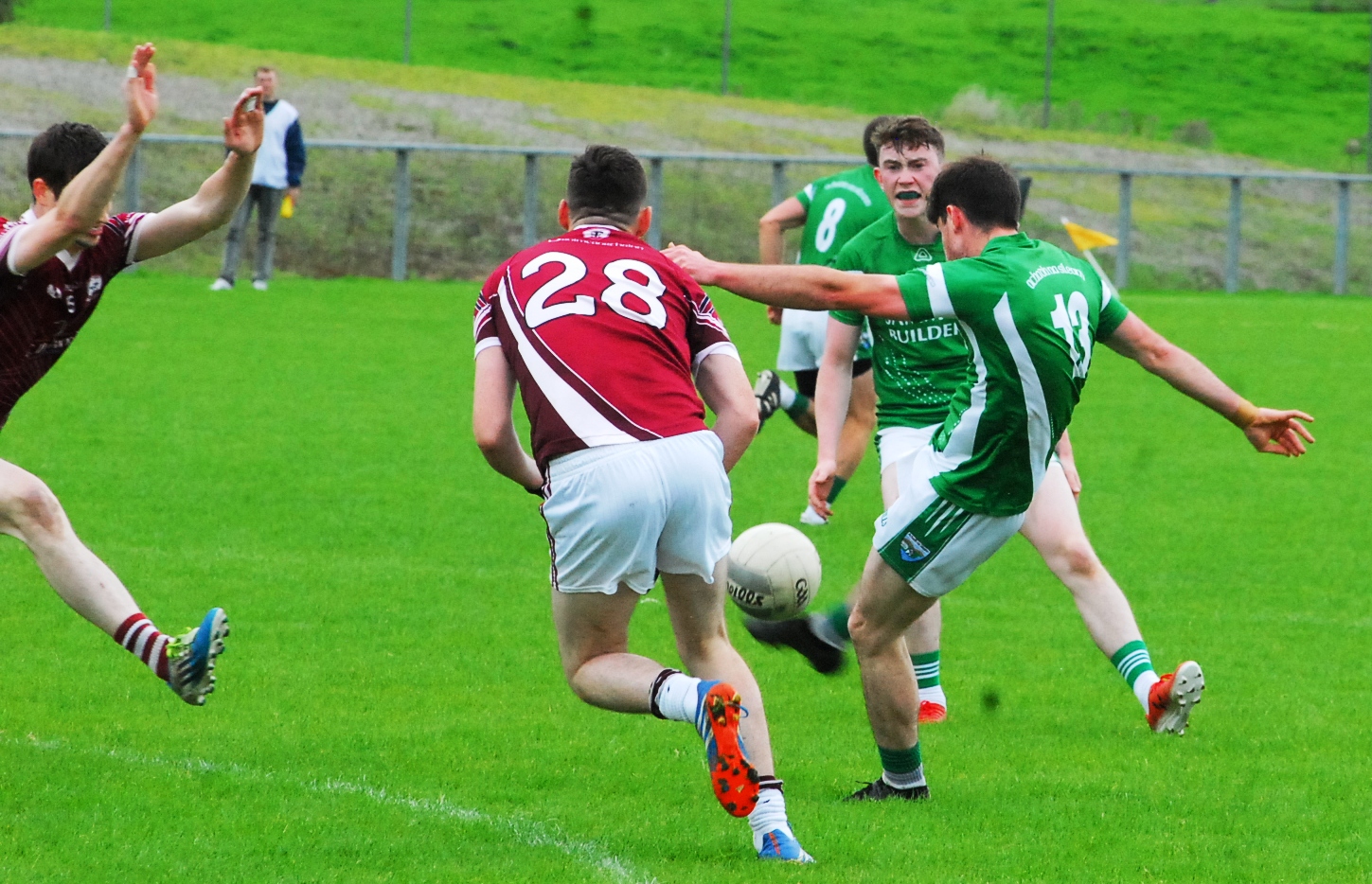 Fintan Fitzpatrick fires in a shot for Aughansheelin against Drumkeerin. Photo by Willie Donnellan

Two win-less teams here knowing that a third defeat spells the end of their hopes for this year. Drumkeerin have produced some good football in patches so far this year but a tendency to go to sleep for long periods of make crucial mistakes is killing their campaign so far.

They need a much greater cutting edge from their attack if they are to progress but they will also be sweating on injury victim Colm Clarke who had to come off last weekend.

Aughavas had a man sent off against Fenagh but much of their problems were not caused by the dismissal. They battled and fought but just lack the overall strength in depth and perhaps the engines of their opponents. Drumkeerin to get their campaign back on track.

Cloone will be without the considerable influence of the excellent Mark Creegan this weekend but a weakened Glenfarne/Kiltyclogher will be unlikely to put up too much resistance to Cloone racking up their third win on the trot.

Another intriguing game - Leitrim Gaels are going for a third win on the bounce and look like a team slowly finding their championship form. Physically, they have plenty of power and an influx of young players has added energy and enthusiasm.

They would want to be wary nonetheless of the challenge posed by Carrigallen. They too have a lot of young talent but they need to start delivering more convincing performances on the field. This will be close but you have to expect Leitrim Gaels to prevail. 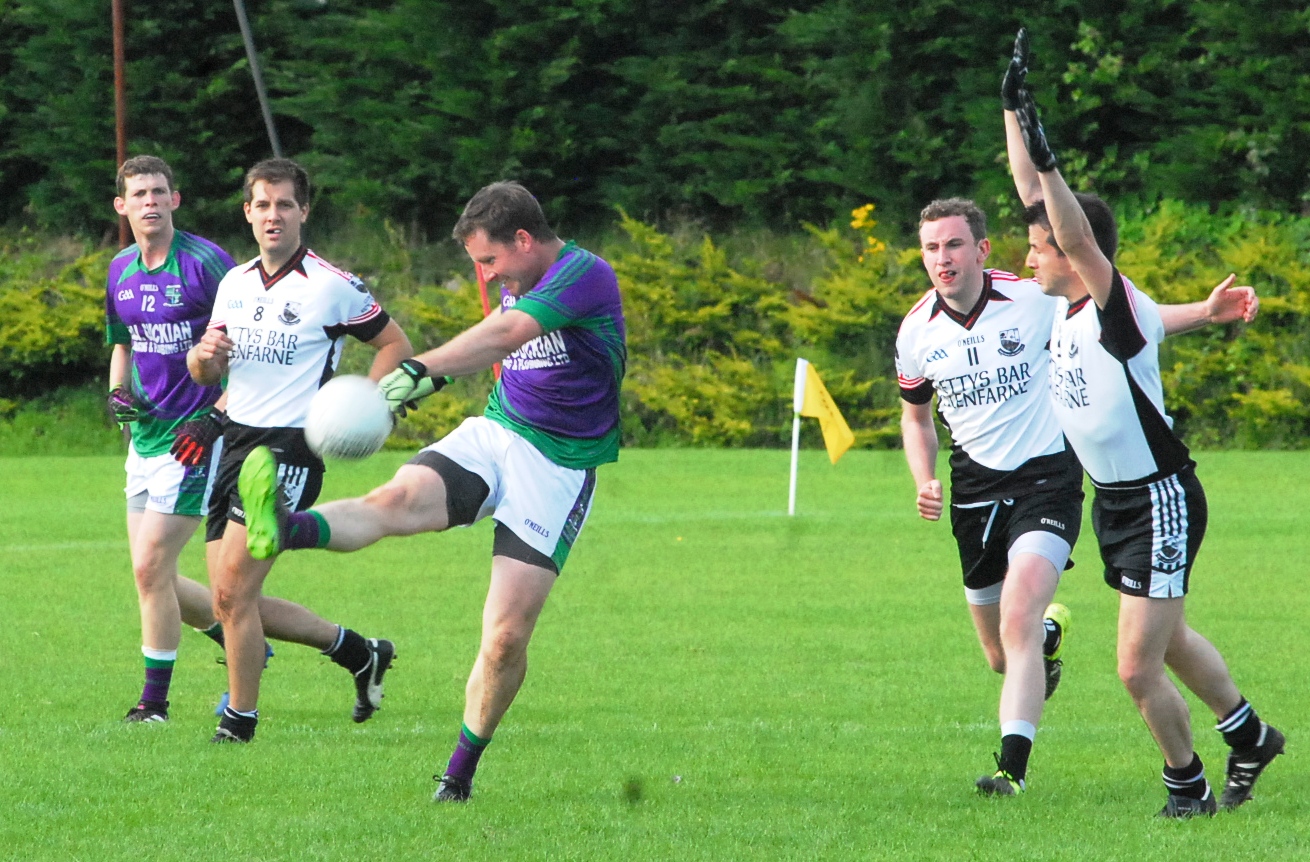 Leitrim Gaels will be looking to extend their unbeaten run against Carrigallen next Sunday. Photo by Willie Donnellan