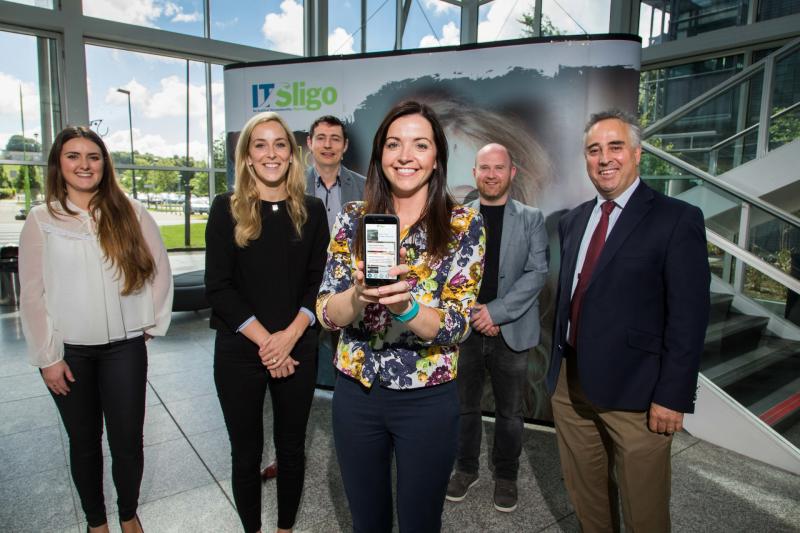 A Leitrim start-up has developed an app that helps CAO applicants connect with third-level institutions while they are deciding which college to attend.

The CampusConnect app, developed by StudyBundles Ltd, allows universities and colleges to form a bond with students while they are trying to decide which college to apply to through the CAO system.

Studybundles was founded in 2015 by lecturers Declan Sweeney and Daniel Hinkley and motion graphic designer John O’Hagan. StudyBundles works with leading education institutions in the UK and Ireland to increase engagement with prospective and current students, primarily through the unique CampusConnect app.

Declan, a native of Kiltyclogher  worked at the University of Bedfordshire before returning home to Co. Leitrim in 2014.

John, originally from Manorhamilton lived in London and worked for Turner Broadcasting before returning home to Co. Leitrim in 2016. The company has offices in both Sligo and Manchester.

The app benefits the students as they become immersed in college life before they step foot on campus, making the transition easier. But it also helps institutions to convert student applications into enrolments – a major issue for most third-level colleges in both Ireland and the UK.

CampusConnect uses the latest native app technologies and is already successfully in use at some of the UK and Ireland’s top universities — such as Liverpool John Moores University, Dublin City University, University of Limerick and Maynooth University — in order to boost overseas student enrolments.

However, this is the first time such technology has been adapted to support Leaving Cert Irish students and others applying through the CAO system.

IT Sligo is the first third-level college to adopt CampusConnect for its CAO prospects but the company is in talks with a number of other universities and ITs about introducing it for their CAO students. IT Sligo CampusConnect is free to download and is available for both iOS and android devices.

CampusConnect is designed to help students kickstart the college experience. It allows them to start planning – and looking forward to – their college adventure before it begins.

It connects students with peers and college staff while introducing them to the institution and its campus, providing maps and general information on course queries, support services, grants, clubs and societies.

However, it also personalises the experience by providing bespoke information on interests specific to the user as well as allowing live chats where students can get to know each other.

Declan Sweeney, CEO and co-founder of StudyBundles which developed CampusConnect, said, "As former university lecturers, we know that progressing from school to third-level can be a daunting experience. CampusConnect is designed to help students gain a real insight into campus life and to give them a solid base for making the important decision of which third-level institute they will attend. They can then immerse themselves in college life before the term starts and are already familiar with the campus — and even their fellow students — when they arrive.

“From the viewpoint of the third-level institution, it gives them a unique insight into potential students and how likely they are to choose to attend their institution. Up to now, this level of individual insight was something that colleges could only dream about.

“It is very exciting for us to see CampusConnect being rolled out to help attract and retain CAO students after we have seen it work so successfully in order to help our clients attract and retain overseas students. It is particularly pleasing for us that IT Sligo is the first institution to take this on board as we are based at the Innovation Centre on IT Sligo’s campus.”

Meanwhile, StudyBundles Ltd, which also has an office in Manchester, has signed a contract with Liverpool John Moores University (LJMU), one of the largest, most dynamic and forward-thinking universities in the UK, with 25,000 students from more than 100 countries worldwide. Its new CampusConnect app has provided international offer holders with the knowledge and support they need to make the all-important journey towards studying in the UK at LJMU.

CampusConnect is also being used for overseas students at the University of Limerick, DCU, Maynooth University, Limerick IT and Letterkenny IT.

The University of Manchester – the largest single-site university in the UK — also uses a version of CampusConnect, which is a bespoke wellbeing app developed by StudyBundles specifically for the institution’s 40,000 students and 10,000 staff.

StudyBundles, an Enterprise Ireland client, was founded in 2015 by lecturers Declan Sweeney, Daniel Hinkley and motion graphic designer John O’Hagan. Declan and John spent several years living in Manchester and London before returning home to the West of Ireland. Declan and the third co-founder, Daniel Hinkley, were both lecturers in Manchester and London before setting up the business and Daniel now heads up the Manchester office.