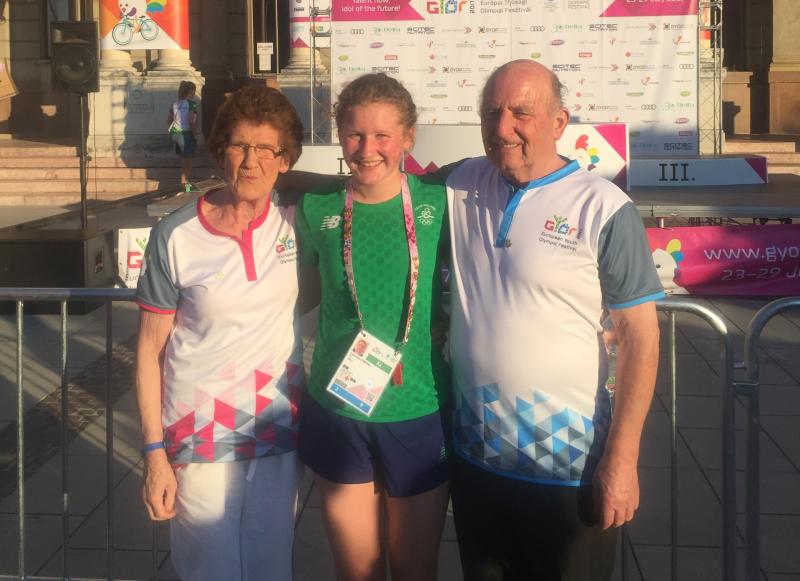 Caoimhe O'Brien with her grandparents Maureen and Denis O'Brien.

Caoimhe O’Brien from Mullingar, Co. Westmeath is the granddaughter of Maureen and Denis O’Brien, Leitrim Village and the daughter of Damien O’Brien, Drumshanbo.

Caoimhe’s journey started over three years ago when she first started cycling and her dream at the time was to go to the Youth Olympics in 2017.

She took to cycling straight away and quickly gained experience from each race she competed in. She started to winning races very quickly and was being noticed by her peers in the cycling world and within Cycling Ireland.

Such was Caoimhe’s success that she was asked to represent Ireland in races in England, Scotland and Wales where she was racing amongst the best riders in the UK.

By 2016 her training and her personal ambition to be the best that she could be, paid off when she won 4 Irish National titles. From this point on her training continued to intensify as she was made aware of the pending selection for the Youth Olympics.

In January 2017 Caoimhe was short listed for the ‘talent team,’ this meant that five riders were selected but only three would end up going to the Youth Olympics.

From January 2017 Caoimhe was put on a high-performance training programme so that she could achieve her potential. In order to be selected in the final 3 Caoimhe had to compete in 4 races in Ireland and 1 race In England.

In early June Caoimhe got the call to tell her that all her hard work had paid off and that she had been selected as one of the 3 cyclists that would be representing Ireland at the 2017 Youth Olympics.

Caoimhe along with the other Irish Olympic athletes headed to their training camp in Mallorca for a week of intense training in early July.

On 22nd of July she boarded the plane with her team mates and headed to Gyor in Hungary where Caoimhe was able to realise her dream of representing Ireland at the Youth Olympics.

After settling in for a few days and participating in the opening ceremony finally it was race day.

The weather conditions were terrible on the day, it was raining and the roads were waterlogged, unfortunately there were lots of crashes during the race with Caoimhe narrowly missing several of them. Caoimhe was having a great race and with only 500m to the finishing line she was in the top 10 and was the leading Irish cyclist.

Then with only 200m to go and the finish line in sight Caoimhe was very much in the fight for a possible medal, when all of a sudden, the girl beside her hit the foot of the barrier and crashed taking Caoimhe with her. Caoimhe was travelling at such speed that when her bike hit the barrier the frame of the bike snapped in two.

At this point her race should have been over, but showing immense character and a steely determination to finish her Olympic race, she got back on her feet, picked up her broken bike and walked the last 150m and finished the race to great applause and cheers from the crowds of supporters.