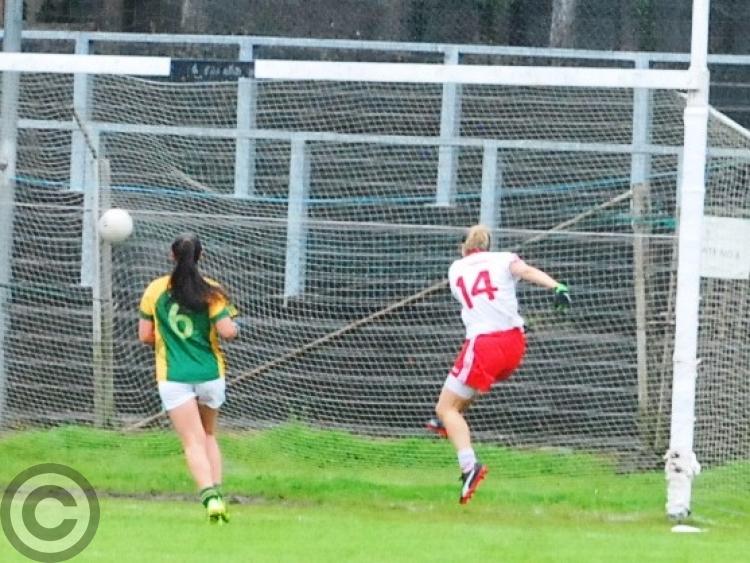 Tyrone justified their favourites tag for last Sunday’s TG4 All-Ireland Intermediate Quarter-Final as they proved too strong for a Leitrim Ladies team that were left cursing missed chances.

Leitrim were left cursing their luck as they hit the woodwork three times with goal chances while also forcing Tyrone keeper Shannon Lynch to bring off two spectacular saves to deny the home team certain goals.

Yet for all the missed chances, there was no disputing that Tyrone were the better team and once they got to grips with the Leitrim challenge and the challenging conditions, they proved far too strong in most areas of the field.

Leitrim had the better of the early exchanges but saw Aine Tighe hit the woodwork twice in the first 120 seconds but it was Tyrone’s Niamh O’Neill who struck the first decisive blow with a clinically taken goal on six minutes.

Leitrim’s goal came five minute later with a great deal of misfortune for the Tyrone keeper who misjudged a long range dipping shot from Deirdre Ward, diverting the ball into her own net.

The Ulster Champions hit back with an unanswered 1-2 over the next five minutes, Grainne Rafferty with the goal.

Leitrim closed the gap to a goal and should have levelled only for Tyrone keeper Shannon Lynch to deny Aine Tighe with a brilliant save and they went straight down the field for Emma Jane Gerwin to fire over a killer point.

With the halftime score at 2-8 to 1-6 in favour of Tyrone, Leitrim started strongly with point s from Michelle Heslin and Eilish O’Dowd as Dearbhla Rooney saw her shot crash off the crossbar.

Unfortunately by the time Leitrim got their next score 18 minutes later, Tyrone had added 2-5 to kill the game off completely with Gemma Begley and O’Neill striking the goals as Leitrim’s All-Ireland dream came to an end for another year.

In the curtain raiser in Pairc Sean Mac Diarmada, Sligo’s greater experience saw them grind out a 3-8 to 1-6 win over Roscommon and set up a semi-final against Tyrone.

SEE THIS WEEK’S LEITRIM OBSERVER FOR FULL REPORT AND REACTION