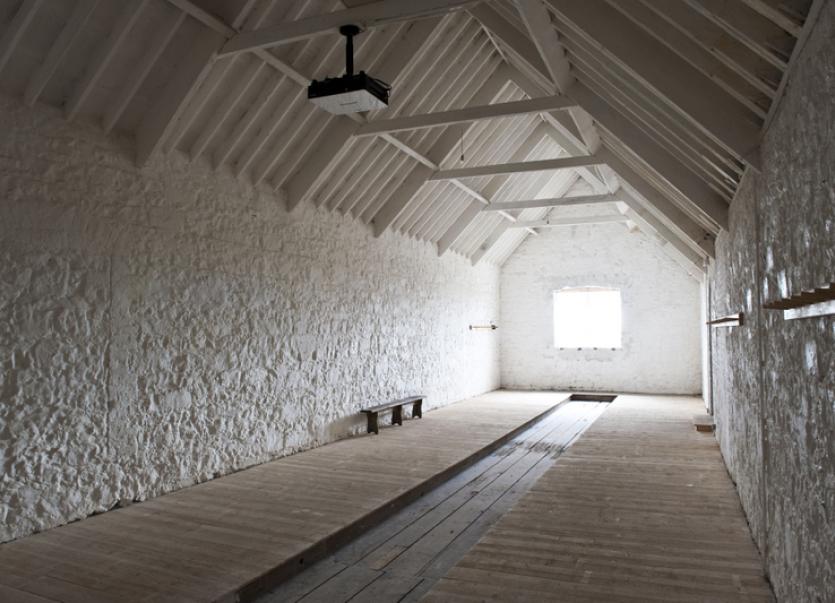 The men's sleeping quarters in the Workhouse Attic.

A very special programme has been put together by Carrick-on-Shannon Heritage Group for Cultural Night, Friday, 22nd September, with the enthusiastic participation of the renowned Breffni Players.

Beginning with a gathering at St. George's Heritage Centre (Church Lane, opposite The Bush Hotel) at 6.30pm for a showing of Alanna O'Kelly's evocative short film of images and sound on the Famine, "No Colouring Can Deepen the Darkness of Truth," people will then walk to the Workhouse behind St. Patrick's Hospital on Summerhill following the brass footprints embedded in the footpath.

This play was produced by Paddy Dillon and performed by The Breffni Players in April 1953, and is a harrowing, thought-provoking reminiscence of An Gorta Mór.

A report in the Leitrim Observer at the time stated in part "The recent production of 'The Black Stranger' which was centred around the most tragic epoch of Irish history, the Great Famine, will surely be remembered by many as one of the outstanding achievements of the Breffni Players." Indeed, this production won awards in several drama festivals of the time, including Tubbercurry, Ballyshannon, and the All-Ireland in Athlone.

The Workhouse Attic was restored by the Heritage Group (a voluntary body that manages heritage amenities in Carrick) to its original stark condition and comprises the men's sleeping quarters. The adjacent Reading Room contains Minutes of the Workhouse Board of Guardians and other historical documents.

Light refreshments will be provided, and the event is free of charge. Duration of the Attic programme is under an hour, so taking part in other cultural events in Carrick is encouraged.

Please note that the Attic is reached by a series of modern stairways and is not wheelchair accessible. Groups should make arrangements directly by ringing the Heritage Centre at 071 962 1757 to assure a place as space is limited. Others attending will be on a first-come, first-served basis.