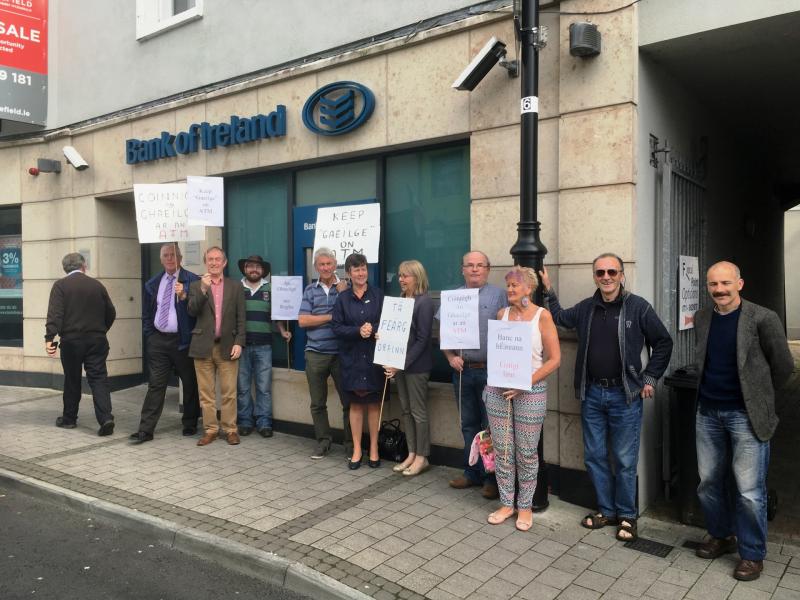 The group protesting outside Bank of Ireland in Carrick-on-Shannon yesterday, Friday.

A protest was held in Carrick-on-Shannon, yesterday, Friday into the move by Bank of Ireland's to withdraw the Irish service on ATMs in Leitrim, apart from one in the county town.

For the past 15 years when you went to withdraw money at a Bank of Ireland ATM, the first question you were asked was, did you want to conduct your transaction in “Gaeilge” or “English”.

For those with a strong interest in the Irish language this was a very positive and welcome development. A recognition that, yes, this was our first choice language and here was a commercial bank giving us a chance to use Irish. After fifteen years, one could never envisage a situation when that service would not be available.

Bank of Ireland branches in Mohill, Drumshanbo, Manorhamilton and Carrick-on-Shannon all offered this service. Then, about two years ago, the option disappeared off the screen in Drumshanbo. When locals protested, they were told not to worry, the service is still running in three other Leitrim towns. Today, the option exists in Carrick on Shannon only. It’s the same story throughout the country.

For member of Conradh na Gaeilge this is all a hugely backward and ill-advised step by Bank of Ireland. Why they would withdraw a service that reflected well on the Bank is hard to understand, especially when there was practically no cost involved in providing the Irish option.

On Friday last, people with an interest in the Irish language held a picket/protest at Bank of Ireland in Carrick-on-Shannon as part of a national demand for restoration of the bilingual option. Indeed it is strongly felt that ATMs should have the facility for multiple language use, as is common in most countries.