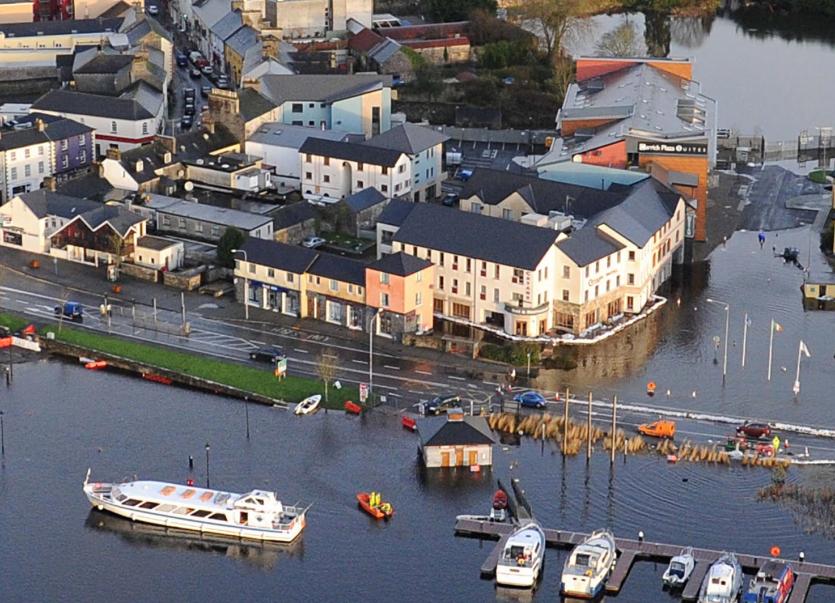 Flooding in 2009 in Carrick-on-Shannon

Cllr John McCartin has told the Minister of State at the Office of Public Works that Co Leitrim and the surrounding area cannot become a reservoir to protect the lower half of the country from flooding.
Referring to CFRAM plans to erect walls in and around areas like Carrick-on-Shannon, Cllr McCartin insisted the answer must be found in a hydraulic solution which makes sure that water gets away from the area as quickly as possible, not in constructing walls.
Cllr McCartin urged the Minister to clear the Shannon's 24 choke points rather than building walls around the river basin in Carrick-on-Shannon to contain it.
"We can't be a reservoir to protect the lower half of the country," he insisted.
“If the Shannon was properly maintained, the flood walls in Carrick-on-Shannon would be completely obsolete. To destroy the natural beauty of the Shannon in Carrick with permanent walls to solve a temporary problem would be completely farcical”.
Senator Frank Feighan agreed that the construction of walls in Carrick-on-Shannon was contentious for those on the ground stating that the feedback he was getting was that the OPW was "using a sledge hammer to crack a nut".
However he insisted concerns with the construction of walls along the Shannon across from the Landmark Hotel could be overcome with further consultation.
Deputy Martin Kenny agreed with Cllr McCartin's view that walls would simply trap water in Carrick-on-Shannon and he stressed that dredging at pinch points along the Shannon would be more beneficial and should be looked at first.
However, he continued, any work on the Shannon must be done in tandem with works on the tributaries feeding the river and providing funding for drainage schemes was vital, something supported by a number of councillors across the parties.
Cllr Des Guckian described the current situation facing the county and country as a result of 100-150 years of neglect.
“Lough Allen and its levels is half the problem of the Shannon,” he said arguing water levels should be kept much lower and dredging should also be carried out along the Shannon to clear silt banks.
Referring to recent flooding of homes in the Drumsna area, Cllr Enda Stenson warned this would become a more widespread problem if issues weren't addressed along the tributaries to the Shannon.
“We had one home flooded in recent weeks and the nearby tributary was not cleaned for nearly 20 years. These cases never reach the national media but it's as important to these people that flooding is sorted as it is to bigger communities,” he insisted.
Cllr Sinead Guckian said European counterparts had indicated Ireland was 60 years behind the rest of the continent in terms of water control and she urged the Minister to look for other solutions than building walls.
“I would have serious concerns about the design of flood relief works in Carrick-on-Shannon and I feel CFRAMS leaves a number of areas out altogether. Areas like Jamestown and Drumsna should have been included. There are a number of vulnerable homes in this area and that hasn't gone away,” she told the Minister.
She also highlighted the fact that those living in areas where flood relief works had been carried out, still were unable to get insurance, “that needs to be addressed.”
Cllr Barry also noted upgrade works need to be carried out at the Weir in Jamestown noting, even when it is fully open it is still restricting water flow.
Cllrs Sean McGowan and Gerry Dolan urged the Minister to immediately work to lower the Shannon to help communities along the waterway.
Cllr Mary Bohan also called on the Minister to look outside Carrick-on-Shannon to other problems areas, noting there were issues in north Leitrim with flooded farmland and homes.
“Clean our rivers is the only solution,” she said. “We need ongoing drainage schemes to keep on top of this.”

Further drop to Lough Allen levels planned
Minister Moran has had a number of meetings withESB and Waterways Ireland regarding water levels on the Shannon and Lough Allen.
“What I want to see between September 1 and October 15 is a further drop of one foot in the levels of water,” he said.
“Between October 15 and February 2018 I want another one foot drop in the water level.”