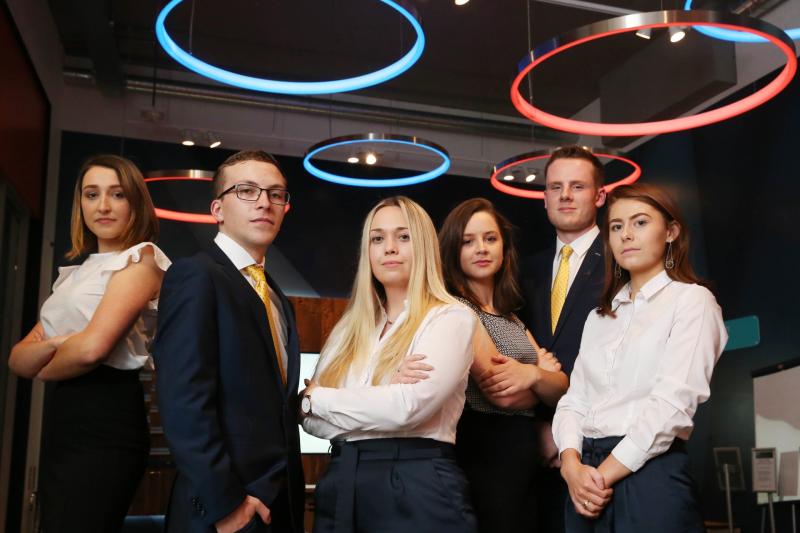 Matthew Hewston, second from left, with his DCU colleagues.

Earlier this summer, Enactus Dublin City University (DCU) was crowned 2017 Enactus Ireland National Champions and will compete on the global stage at the Enactus World Cup.

Matthew Hewston from Manorhamilton is one of six students travelling to London from September 26th – 28th to showcase the team’s work.

Business leaders, academics, alumni and third level students from across the country gathered in Bank of Ireland, Grand Canal Square, Dublin, this week to celebrate the official Enactus Team Ireland Launch ahead of the Enactus World Cup.

At the launch of the Enactus Team Ireland event, the DCU team showcased their three projects to be presented at the Enactus World Cup.

Projects from the winning team include Second Scoop, an ex-prisoner work programme in partnership with Ben & Jerry’s, providing ice-cream for corporate events, festivals and fairs; Well On The Way, a social enterprise providing business apprenticeships to asylum seekers in order to integrate into Irish society; and HeadstARTS, a programme which provides weekly classes in Dance, Drama, Music and Art for people with intellectual disabilities.

Enactus Ireland is one of 36 country organisations around the world that operates an Enactus programme, bringing together student, academic and business leaders who are committed to using the power of entrepreneurial action to solve challenges in local communities.

Laura Dennehy, Country Manager, Enactus Ireland said, “Social innovation and entrepreneurial action plays an important role in shaping the future of Irish society. Enactus Ireland provides a vehicle for students to affect real social change whilst also empowering them to develop the leadership, interpersonal and practical skills necessary for the workplace. We would like to wish the DCU team the best of luck as they go on to represent Ireland in the forthcoming Enactus World Cup.”

The DCU team saw off competition from nine other third level institutions.