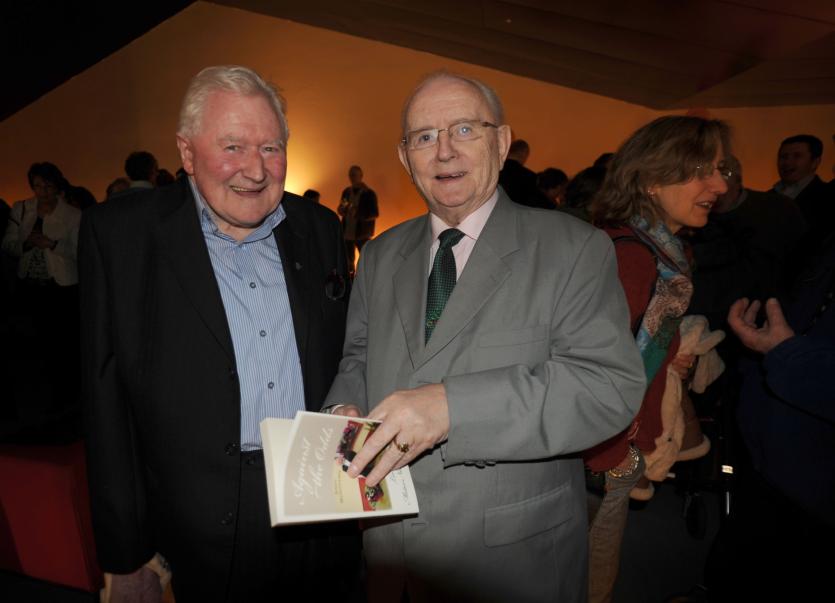 Broadcaster Jimmy Magee, in his role as patron of the Irish Motor Neurone Disease Assocation with Cloone's Andy McGovern author of 'Against the Odds' at the launch of the book.

Warm tributes have been paid to legendary sports commentator Jimmy Magee whose passing was announced this morning.

As a commentator for RTE he covered 12 World Cups and 13 Olympic Games (including two Winter Olympics).

A look back on the amazing life and career of @RTESport commentary great Jimmy Magee. pic.twitter.com/EjNChHndv3

The legendary sports commentator and broadcaster, who hailed from Co Louth, was a regular at Croke Park and his incredible recollections of All-Ireland winning teams helped earn him the title ‘The Memory Man’.

Uachtarán Chumann Lúthchleas Gael Aogán Ó Fearghail said, "Jimmy’s sad passing represents the end of a golden era in Irish broadcasting and few – if any – will ever come close to reaching the standards he did across so many sports.

"He will be synonymous with RTÉ’s Olympic coverage but he had a deep interest in many sports – not least our own codes.  The ‘Jimmy Magee All-Stars’, which involved some of the top names in Gaelic games and were keenly followed by so many with an interest in the GAA.

“He was with us recently in Croke Park on All-Ireland hurling final day and was a regular in our media centre where his presence always brought a smile to those who he encountered.

“Our thoughts are with his family and wide circle of friends and admirers at this difficult time.”

Those sentiments were echoed by FAI CEO John Delaney who described Jimmy Magee as 'the voice of football’.

"Jimmy Magee is synonymous with Irish sports commentary, and his voice was the soundtrack to some of the greatest sporting moments in history," said Delaney.

"Whether it was iconic moments like John Treacy’s Olympic marathon silver medal in 1984 or Barry McGuigan’s historic win over Eusebio Pedroza, Jimmy had a range that covered many sports.

"But for me, Jimmy Magee was the voice of football for generations, with his iconic commentaries marking such great occasions, like Liam Brady’s goal against France in 1977 at Lansdowne Road and Diego Maradona's goals against England in Mexico in 1986.

“Jimmy was a great League of Ireland man, and I will always remember him at Aviva Stadium every year for the Irish Daily Mail FAI Cup Final where he would regale everyone he came across with stories of great sporting occasions.

"He also compared many football events and was a fantastic host of the reunion of all the former Ireland players ahead of the first ever football international at Croke Park in 2007.

"Ireland has lost a true giant and Irish sport has lost one of its most iconic figures and I would like to pass on the sincerest condolences of the FAI to Jimmy’s family and friends on this sad occasion."

RTÉ Head of Sport Ryle Nugent said, "I think he was the soundtrack to many generations that included Michael O'Hehir, Mícheál Ó Muircheartaigh, Fred Cogley and himself, they were the original commentators and the ones we looked to when there was a major sporting event.

"Jimmy holds his own with some of the most iconic memories in broadcasting in sport in this country and rightly so.

"He was an incredibly positive human being, I never heard Jimmy start a conversation in the negative and he took that into his professional life."

RIP Jimmy Magee. Our song was "Seven Spanish Angels"... the best travel companion ever. A pure rogue for the Craic.❤️ pic.twitter.com/PNJL9BlGaf

Jimmy Magee - a voice that will never be forgotten in Irish sport. A great character, a gentleman and my biggest supporter. RIP. pic.twitter.com/CpctrT0jit

One of the voices of sport in Ireland and a lovely man. Rest in peace Jimmy Magee. pic.twitter.com/v4CyFzl77E

Sad news to hear that Jimmy Magee has passed away. One of the best commentators of Irish sport ever RIPJimmy

Heartbroken & saddened to hear the legendary Jimmy Magee has passed away. Jimmy was a great colleague & even better friend. I'll miss him. pic.twitter.com/hW2prMB6fd

Uachtarán Chumann Lúthchleas Gael Aogán Ó Fearghail has given his condolences to the family of the late Jimmy Magee https://t.co/npaxvy6lmw

RIP to the great Jimmy Magee after his sad passing this morning. Here we remember his all-time Sligo Rovers XI via @SoccRepublic #bitored pic.twitter.com/5OstV36TGP